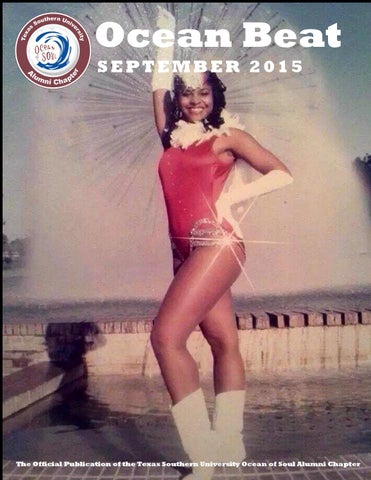 Alumni Announcements Meeting Time and Date Football Season is approaching and the Alumni Chapter meetings, currently scheduled for Saturday evenings, will conflict with TSU Football. The Alumni Chapter is looking into other options, such as moving the Alumni meeting to Saturdays mornings or to a completely different day and time. Please send your suggestions to Oceanalumni@gmail.com

The Ocean of Soul Alumni Chapter is having a Clearance Sale of last year’s Homecoming Shirt. All sizes are available except Large. Contact Oceanalumni@gmail.com for more information Shirts are $7($5 for paid members)

ATTENTION OCEAN In light of recent decisions made by the State of Texasâ&#x20AC;&#x2122; during the 83rd & 84th Legislative sessions, Texas Southern University has received significantly smaller funding to assist the university with adequate resources for capital improvements and institutional advancement. As other universities in the State of Texas have received an increase with financial assistance, Texas Southern remains a recipient of insufficient assistance to help propel the university into the future. Please take a moment to copy the letter posted and send it to the Governor, Lieutenant Governor Dan Patrick and the Speaker of the House to voice your support of our beloved Alma Mater receiving the financial support they deserve. Governor Greg Abbott Office of the Governor P.O. Box 12428 Austin, Texas 78711-2428 https://gov.texas.gov/contact/

Speaker of the House Joe Straus P.O. Box 2910 Austin, TX 78768 http://www.house.state.tx.us/members/member page/email/?district=121&session=82 http://www.fyi.legis.state.tx.us/Home.aspx This is the link used to find your elected official.

LETTER TO THE TEXAS LEGISLATURE To:

Dear ______________: As an alumnus of Texas Southern University (TSU), I want to express my grave concerns about the inadequate level of state support that the Legislature provided TSU during the past Legislative session. Texas Southern’s state appropriation has dropped 14% since 2010, reduced from $122 million to $105 million, and this trend is unacceptable. While we appreciate that the state finally approved new facilities for all universities, including TSU’s much needed Library/Learning Resource Center, we were very disappointed other funds that should be committed to Texas Southern were not made available. We would be remiss if we didn’t express our thanks to Representative Helen Giddings for her yeoman’s work in getting the B-On-Time program returned to campus control. We have worked with her over the past two sessions to solve this problem. And our new library was passionately supported by Representative Garnet Coleman, who submitted the proposal for $80 million and helped ensure that we ended up with adequate tuition revenue bond funding for the new TSU Library/Learning Resource Center. Nonetheless, for the past three sessions, which provided funding from FY2010 through FY2017, Texas Southern has had to expend great effort to just maintain the funding that was part of Governor George W. Bush’s state settlement with the Office of Civil Rights in 2000. That agreement required the state to increase the budget at Texas Southern by $25 million each biennium. Since 2009 the legislature has cut the OCR funding each session. We do appreciate that the 84 th Legislative session finally restored the OCR funding to its mandated level; however, this is not something that the University should have to fight to maintain. It should be built into the ongoing base budget for the University, where it would not be subject to cuts from the Legislative Budget Board. Just one example of the continuing disparity in funding for TSU is the incorrect formula used to fund the TSU Pharmacy and Health Sciences College. As you may know, since TSU does not have a medical school, the pharmacy program is funded through the General Academic Institution formula where other state pharmacy schools, i.e. Texas Tech University Health Science Center and Texas A&M University Health Science Center, are funded through the health sciences formula. This amounts to a $12 million difference in funding levels between TSU and most other pharmacy programs in the state per biennium. The University of Houston (UH), which was also subject to this inequity, received an additional $4 million for its program during the 2013 83rd Legislative Session. Texas Southern University has been unable to even get support to match what was given to UH in the 2013 83 rd sessions. We want to go on record that as voters, as your constituents, and as TSU alumni, we are not satisfied with the status quo. We are committed to ensuring that our University receives fair and equitable funding going forward. Our elected officials will be held responsible for meeting their obligations to Texas Southern University. We will continue to reach out to you over the next year and through the 2017 85th Legislative Session to guarantee that our University receives the resources it needs to support our students and the future citizens and taxpayers of Texas. Thank you for your time and attention. Sincerely, Alum name

The Texas Southern University Ocean of Soul Alumni Chapter provided refreshments for the incoming band members during the kickoff practices for the upcoming season. Although the cafeteria was not available during that time, the Ocean of Soul Alumni Chapter with the assistance of our genero us sponsors provided burgers, fried fish and hotdogs for the band members after the day long activities , in preparation for the upcoming Labor Day Classic against Prairie View A & M University. Special thanks to H.E.B. Texas Grocery, Walmart and Jimmy Dillardâ&#x20AC;&#x2122;s Famous Firth Quarter Catering for their generous hospitality !

Andre Hayward, Ocean Alumnus Andre Hayward is an extremely gifted trombonist with the sound and clarity reminiscent of the late J.J. Johnson. His gospel-tinged approach is refreshing and will warm the hearts of anyone he comes in contact with. Born in Houston, Texas in 1973, Hayward's first exposure to the world of music was through his parents, Melvin and Barbara Hayward where musical talent exists on both sides. Hayward began playing trombone and tuba at the age of 11 under the tutelage of Leon Schreiber and 2 years later with Bob Odneal who was lead trumpeter for Maynard Ferguson. Hayward continued playing through high school where he attended the High School for Performing and Visual Arts under the direction of notable jazz educator, Robert "Doc" Morgan. He continued to hone his skills with Houston's legendary educator, Conrad O. Johnson. It was Conrad's instruction, and the opportunity to work in his big band, "The Big Blue Sound", where he really started to gain experience working in an ensemble. He landed his first engagement with trumpeter Roy Hargrove for a European tour after being heard at a jam session during a festival while playing with the Texas Southern University Jazz Ensemble. After Hargrove, Hayward performed and recorded with singer/ bandleader Betty Carter for five years in her acclaimed "Jazz Ahead" program. Other acclaimed performers include Joe Williams, Slide Hampton, John Lewis, Mingus Dynasty Big Band, Gerald Wilson, Kirk Whalum, Jimmy Heath, The Duke Ellington Orchestra and Illinois Jacquet's Big Band. His most recent performance credits are The Jazz at Lincoln Center Orchestra, The San Francisco Jazz Collective, and The Clayton - Hamilton Jazz Orchestra. In 2003, he received first place and a $20,000 scholarship at the International Thelonious Monk Trombone Competition in Washington, DC. Hayward is also an educator who has conducted numerous clinics and workshops in various parts of the US and overseas. Hayward currently serves as Jazz Trombone SpeMusic.

cialist at University of Texas - Butler School of

The Ocean of Soul Alumni Chapter is looking for mentors

Hey Ocean! This past spring, the OOSAA started a mentor program for current students in the Ocean of Soul. In the program, Alumni were assigned 1-3 students to keep in touch with throughout the semester in an attempt to create relationships, bridge the gaps between alumni and current students, and assist the students if needed. We are currently in need of more mentors to work with the incoming freshmen. If you are interested in signing up, please contact Joselyn Coats at jayone_99@yahoo.com for more details.