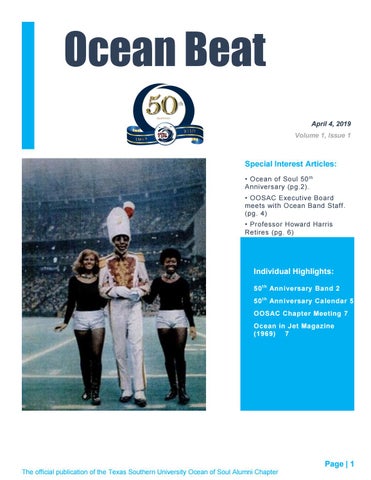 OCEAN OF SOUL 50TH ANNIVERSARY In July 1969, Professor Benjamin J. Butler, II became the new band Director of the Texas Southern University Marching Band. Mr. Butler created a band program that is world renowned and has inspired musicians everywhere. This year, Texas Southern University, the City of Houston and Ocean supporters celebrate the founding of the 9th Wonder of the World, the Ocean of Soul Marching Band.

the Oceans place in history, raise money for TSU students, and build for the future.

The Ocean of Soul Alumni Chapter, with the guidance of Professors Butler, Lee

Ocean family, it starts with each of you getting involved. Please read through the first edition of the 2019 Ocean Beat, and sign-up to become a part of something that is truly inspiring.

and Gibson have planned a full year of events and activities. These activities give us an opportunity to commemorate

OCEAN TRIVIA Q. How did the Texas Southern University band get the name â&amp;#x20AC;&amp;#x153;Ocean of Soulâ&amp;#x20AC;?? A. Q. Who came up with the unique Ocean of Soul logo? A. Q. How many members were in the inaugural (1969) Ocean of Soul? A. Q. Has the Ocean of Soul Marching Band ever performed at the NFL Superbowl? A.

Answer all questions correctly at tsuoceanalumni.com for a free entry in our 50th anniversary prize pack drawing and learn more about the 9th Wonder of the World.

50th Anniversary BAND 50TH Anniversary Band preparation is in full swing. Our 50th Anniversary Band Committee Chair, Juan Morrison, has an exciting show planned in coordination with Directors Gibson, Lee, and Butler. Close to 100 people have already signed up to participate during halftime. Key information to know: UNIFORM- The 50th Anniversary Alumni Uniform will be $125 (warmup, plume, spats +$25 to Ocean). Auxiliary fee will be just $25 Ocean donation, as they have additional uniform and costume requirements.

PRACTICE- Wednesdays in May and June from 6-8pm. Wednesdays and Saturdays July &amp; August. Each session will be 1-hour music and 1hour conditioning. MUSIC- PDF versions of the music will be provided for all participants. Audio recordings will also be made available. Whether you plan to march or stand with the band at half-time, please sign-up at tsuoceanalumni.com. We are asking all Ocean members to join us as we celebrate this historic milestone.

operating performance in 2019, along with continued improvement in the university’s financial reserves.

The report also affirmed TSU’s ongoing strategic initiatives, including its emphasis on recruitment and retention of students, as well as continued “We are doing the right things when it comes to our financial support from the state in contributing to fiscal health,” said TSU President, Dr. Austin A. the positive rating. Lane. “We have dramatically increased our financial reserves through the use of strong fiscal Dr. Lane pointed to the university’s Top 5 Priorities controls. To move from ‘negative’ (2016) to ‘stable’ as being a critical component to success. These (2017) to ‘positive’ (2018) in a three-year span is include 1) Student Success and Completion; 2) outstanding news for our students, staff, alumni Academic Program Quality and Research; 3) and the entire TSU community. But we aren’t done. Culture; 4) Partnerships; and 5) Finances. We will continue to move toward even stronger ratings with the plan we have in place.” “Together, our strategic priorities give TSU a clear purpose,” added Dr. Lane. “This has led to our last In its rating action, Moody’s cited “improved fiscal two investor rating increases, which is a significant discipline and success with strategic initiatives” achievement, and they keep us pointed in the right that have led to a stronger cash and debt service direction.” position. It anticipates continued positive

National Battle of the Bands

OOSAC MEMBERSHIP If you are as excited as we are, and want to become part of the great work the Ocean of Soul Alumni Chapter is doing for our TSU Band Students and the Ocean of Soul, join today at https://www.tsuoceanalumni. com/store/c1/Featured_Prod ucts.html.

Each 2019 Chapter member will receive an Ocean of Soul Alumni Chapter shirt with your paid membership.

Money is used for

Tau Beta Sigma, which raised over

Need to make sure Ocean

students know it is available.

party at the Party Kings

this bill was not brought to a

identified for each section, planning is

TSU from being absorbed by

on-going, but practice will start in May.

84 people have signed up for the

investing in new facilities. B.

to promote and host. D.

OOSAC Membership- Each paid member will receive an OOSAC polo.

Ocean Family Weekend will be Labor

OOSAC E. Board Meeting with Band