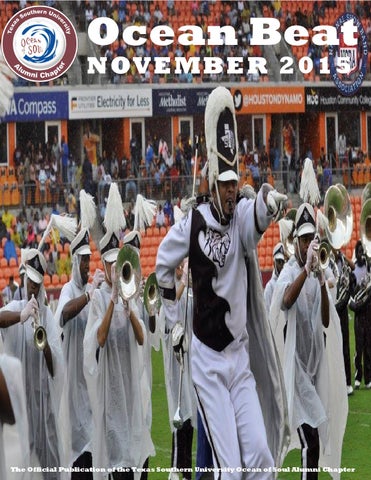 The Texas Southern University National Alumni Association Ocean of Soul Chapter would like to extend a Special Thanks to the Homecoming Tailgate Committee for an Outstanding Job in organizing the tailgate. Special Thanks to Marcus â&amp;#x20AC;&amp;#x153;Chinoâ&amp;#x20AC;? Montgomery for barbecuing all of the meat

Texas Southern University took a major step to unify national, state and local law enforcement agencies to help secure and protect its campus. The TSU police department hosted a round table discussion to look at procedures, personnel and protocol when dealing with crime and crime prevention in our area. TSU President, Dr. John M. Rudley told the law officers that Texas Southern is in the business of educating students and that we need their help as experts to keep our campus safe. “I want to send a message to the community that this is not a one day story,” President Rudley emphasized. “We will deal with this issue of protecting our students, faculty and staff 365 days a year.” The agencies involved included the Texas Southern University Police Department, the Houston Police Department, the Metro Police Department, Harris County Constable’s Office-Precinct 7, Texas DPS Highway Patrol-Region 2, Texas DPS Texas Rangers-Region 2, Bureau of Alcohol, Tobacco &amp; Firearms, Federal Bureau of Investigation and the US Attorney General’s Office. Dr. Rudley and his law enforcement leaders said five initiatives and recommendations that were presented in the task force meeting will be implemented immediately. They are: 1. 2. 3. 4. 5.

Texas Southern will also have a threat assessment done on the campus. “Securing TSU’s campus is a priority for us and this discussion with the various law enforcement agencies, I believe, will assist us elevating our level of security at Texas Southern University,” said President Rudley.

Letter from the TSU Board of Regents

Kirk Whalum was born in Memphis, Tennessee. He attended Melrose High School and Texas Southern University where he was a member of the World Famous Ocean of Soul Marching Band. In addition to singing in his father&#39;s church choir, Whalum learned to love music from his grandmother, Thelma Twigg Whalum, a piano teacher, and two uncles, Wendell Whalum and Hugh &quot;Peanuts&quot; Whalum, who performed with jazz bands around the country. He told John H. Johnson&#39;s magazine Ebony Man in a 1994 profile, &quot;The music I like to play and write encompasses the four elements I grew up with: Memphis R&amp;B, gospel, rock, and jazz. The emphasis, though, is on melody, period.â&amp;#x20AC;? In 1986, he performed at Jean Michel Jarre&#39;s giant concerts Rendez-Vous Houston and Rendez-Vous Lyon. At each concert, he performed the track &quot;Last Rendez-Vous&quot;, also known as &quot;Ron&#39;s Piece&quot;, in place of Jarre and Whalum&#39;s mutual friend, saxophonist and astronaut Ron McNair, who died in the Challenger disaster. Whalum has worked on a number of film scores, including those for The Prince of Tides, Boyz n the Hood, The Bodyguard, Grand Canyon, and Cousins (film). In 2005 Whalum recorded the Babyface Songbook (2005) with R&amp;B icon Babyface&#39;s best songs of the past 15 years, including &quot;Exhale (Shoop Shoop)&quot;, &quot;I&#39;ll Make Love to You&quot;, &quot;When Can I See You&quot;, and others. Joining in the intimate and stylish proceedings are other smooth jazz notables, including trumpeter Rick Braun, soprano saxophone player Dave Koz, and guitarists Norman Brown and Chuck Loeb among others. On June 20, 2014, Whalum was the inaugural Jazz Legend honoree of the National Museum of African American Music in Nashville, Tennessee. In September 2015, it was announced that Whalum would be joining the faculty of Visible Music College in Memphis, Tennessee.