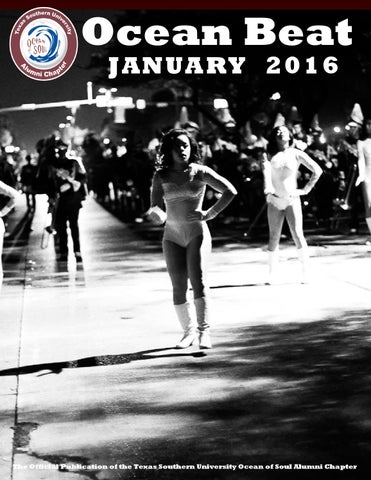 Alumni who pay their dues will receive:

25 % discount off all OOSAC Activities (with membership card)

ON THE COVER The Ocean of Soul Performing in Desoto Holiday Parade in Desoto, Texas

Congratulations to our 2015 Winter Commencement Graduates

TSU NEWS Dr. Rudley to Resign as President at the end of the Spring Semester

The Texas Southern University president announced Saturday he will be stepping down at the end of the school year. &quot;I&#39;ve worked hard for eight-and-a-half years,&quot; President John M. Rudley said. &quot;It&#39;s like LeBron James, I never thought he&#39;d retire, but we&#39;re not invincible. We all need to have an exit strategy.&quot; The 68-year-old former CPA has aggressively expanded the school&#39;s programs and standards over the last eight years, but TSU has also weathered turbulence in recent months over several shootings and construction delays. &quot;He will leave the university in a better position than when he came here,&quot; said Derrick Mitchell, chairman of TSU&#39;s board of regents, on Rudley&#39;s resignation. &quot;We&#39;ve had some challenges, like any other university, but he&#39;s handled them well as president.&quot; Rudley was tapped in 2008 to replace disgraced Priscilla Slade, a flamboyant personality whose handling of the school&#39;s finances left her facing criminal charges of misapplication of fiduciary property. Rudley described his tenure Sunday afternoon as &quot;taking an institution on life support and putting it in position where it is now, where it&#39;s competitive,&quot; he said. Previous to his appointment to the top position at TSU, Rudley had served as interim chancellor of the University of Houston System, interim president of the University of Houston and vice chancellor for business and finance at the Tennessee Board of Regents, the sixth largest system of post secondary education in the nation. As TSU president, Rudley led the school through the chaos of Hurricane Ike, which left the university without power and many buildings badly damaged.&quot;I&#39;m really proud we were able to recover from storm and make the campus better,&quot; Rudley said. Rudley revamped the school&#39;s leadership, raised its credit rating, undertook a major effort to beautify and rebuild the campus, oversaw construction or planning of several major new buildings, raised enrollment standards and created civil and computer engineering programs along with a new executive MBA program and a new executive masters of public administration online program. The school also weathered several recent shootings on or near campus that killed one student, as well as a scandal earlier this year when dorms weren&#39;t completed on time, forcing the university to house students at a hotel in the Texas Medical Center. Those incidents sparked a backlash from students, who took to social media with the #TakeBackTxSU movement, which one faculty member said &quot;spread like a virus.&quot; Rudley acknowledged both incidents had weighed on him in recent months. &quot;I don&#39;t think people understand the toll [of a student getting shot] takes on someone who cares for their students as much as I do,&quot; he said. The last legislative session was really brutal,&quot; Rudley acknowledged, noting that lawmakers in Austin had cut millions from TSU&#39;s budget during his stewardship of the university. &quot;For the last seven years, we&#39;ve really gotten no financial support for our operating budget, that was very telling for me.&quot; &quot;I don&#39;t believe there was consensus in the legislature to support TSU,&quot; he said. &quot;A new, fresh start might be what everyone is looking for.&quot; A transition team will search for a new president over the next few months, said Mitchell, the regent board chairman. Rudley&#39;s last day will be Aug. 31, though he has agreed to stay on for longer, if necessary, to provide for a smooth transition. Reprinted from the Houston Chronicle.

TSU ATHLETICS Texas Southern hires Michael Haywood as football coach HOUSTON (AP) â&amp;#x20AC;&amp;#x201D; Michael Haywood will be the new coach at Texas Southern after agreeing to a four-year contract on Thursday. Athletic director Charles McClelland tells KRIV-TV in Houston: &quot;With his background and extensive experience we were lucky to get someone of Haywood&#39;s caliber.&quot; He replaces Darrell Asberry, who stepped down on Sunday after Texas Southern went 3-7. Haywood most recently was the coach at Miami of Ohio. He was hired to coach Pittsburgh in December 2010, but was fired three weeks later when he was charged with domestic battery with a child present. The charges were eventually dropped. &quot;I apologized for this terrible mistake that I made,&quot; Haywood told the television station. &quot;It was wrong what I did. I have learned from this situation. It has gone through the legal situation and I have been cleared. I am thankful that I am able to continue my coaching career.&quot; He has worked in private business for the last five years. He doesn&#39;t believe his time away from coaching will hurt him. &quot;I really don&#39;t think it affects me at all,&quot; Haywood said. &quot;I&#39;ve spent a significant amount of time consulting other universities and high schools in the area. At the same time I&#39;ve done pregame and postgame shows for the University of Notre Dame. So I&#39;ve been heavily involved in football over the last five years.&quot; Haywood orchestrated a major turnaround while at Miami of Ohio. In 2009 the team was 1-11 and 1-7 in MidAmerican Conference play. The following season Haywood won MAC Coach of the Year honors after leading the team to an 11-1 record with an 8-1 mark in conference play. Haywood worked as offensive coordinator at Notre Dame from 2005-08 and has also served as an assistant at Texas and LSU in his career. Reprinted from USA Today

TUNE IN TO KTSU 90.9 FM HOME OF TSU ATHLETICS

The Annual Ocean of Soul Recruitment and Retention Ceremony Congratulations to the all of the sections of the year: Woodwind Section - Flute/Piccolos Brass Section - Trombones Auxiliaryâ&amp;#x20AC;&amp;#x201D;Twirlers Percussion Section - Quads

From Left to Right: Dr. James W. Ward, Provost and Vice President for Academic Affairs and Research; Regent Derrick Mitchell, Chairman of the Board of the Regents, Dr. Kirk Whalum and President John Rudley. Congratulations to Texas Southern University Alumnus Kirk Whalum, who delivered the Commencement Address to the 2015 Winter graduating class. Dr. Whalum was also awarded The Honorary Doctorate of Humane Letters, the university’s highest honor. On December 11, Whalum and his musical friends Gerald Albright, Norman Brown, and Shelea entertained the near capacity Sawyer Auditorium crowd with his annual “Gospel According to Jazz” Christmas concert. The quartet of musicians took turns performing a variety of songs from traditional Christmas carols like Joy to the World and The Christmas Song, etc. to contemporary hits from their various projects including Grover Works and Underpaid to Can’t Stay Blue. At times they all shared the stage together much to the crowds Delight.