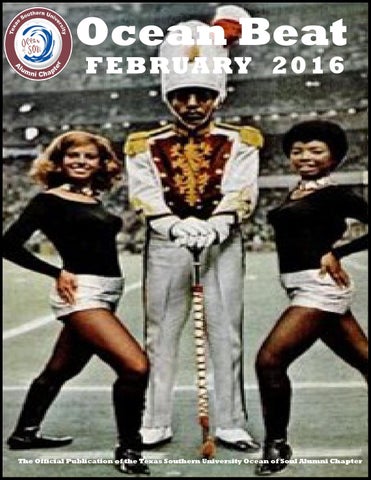 CATCH THE WAVE THE TIME IS NOW

HAPPY BLACK HISTORY MONTH ON THE COVER The Ocean of Soul on the January 1972 cover of Ebony Magazine. From Left to Right: Sheila Mouton, Edward Williamson and Evelyn Conerly. BACK COVER

DDC offers performances that encompass an assortment of shows beyond the concert hall. We have educational as well as seasonal performances. Our educational performances include: Cartoon Jazz; History of Jazz; Jazz Kaleidoscope; Jazz &amp; Poetry: A Fusion; and Texas Tenors DDC Educational Performances, a division of the Dinky Drum Company, LLC (DDC) goal is to enrich minds through music. DDC would like to bring one of our shows to your Schools, Community Centers, Libraryâ&amp;#x20AC;&amp;#x2122;s, or Churches. A Proud Supporter of the Texas Southern University Ocean of Soul and the Texas Southern University National Alumni Association Ocean of Soul Chapter

TUNE IN TO KTSU 90.9 FM HOME OF TSU ATHLETICS

The Board of Regents for the University of Texas System in November released maps and artist&#39;s renderings of the system&#39;s pro posed Houston campus

AUSTIN — University of Texas System Chancellor Bill McRaven is expected to testify before the Texas Higher Education Coordinating Board next week about the system’s possible expansion into Houston — an issue that’s stirred some controversy in recent months. In a conference call with reporters on Wednesday, Texas Higher Education Commissioner Raymund Paredes said McRaven has agreed to slow the process down. He also said he believed conversations about the potential expansion will come to a “good conclusion.” He said he didn’t have an opinion on the plan, but that he could understand why the UT System had an interest in Houston. “We think [McRaven has] put into place a very reasonable process for making decisions,” Paredes told reporters. “And I think he’s got a good plan consulting leaders in Houston.” It is a turn for Paredes, who expressed doubts shortly after McRaven and the UT System announced plans to purchase more than 300 acres in Houston to develop and build an ‘intellectual hub.’ Paredes told the Austin American-Statesman then that he would watch the move closely. “We have great respect for the role and responsibility of the Coordinating Board and would never seek to bypass the prescribed route of expanding programs,” McRaven said in a statement in December. “Purchasing land does not require Coordinating Board approval. If or when we consider expanding academic programs in Houston, that process would occur only with the full approval of the Coordinating Board and with thoughtful consultation with elected officials and our higher education colleagues in Houston.” Lawmakers in Houston have been vocally opposed to the plans. Many have written directly to McRaven, expressing concerns that any expansion into Houston would take away resources from other universities in Houston. The University of Houston Board of Regents passed a strongly worded motion in 2015, opposing the plans as well. Reprinted from The Dallas Morning News

TSU president open to working with UT on Houston expansion While University of Houston leaders and area lawmakers have fought against the University of Texas&#39; plans to expand on 300 acres in Houston - calling the move an invasionâ&amp;#x20AC;&amp;#x201D;one school in the neighborhood is welcoming the state flagship. Texas Southern University does not fear a UT &quot;Trojan horse.&quot; Rather, the university&#39;s president said he wants to see where TSU can fit into the plan. &quot;I&#39;m not on that bandwagon,&quot; Texas Southern President John Rudley said during a meeting with the Houston Chronicle&#39;s editorial board Tuesday. &quot;People who have said we&#39;re going to push back -- I don&#39;t see the substance in the push-back part. I think we all are supposed to be able to listen. It might be a public policy issue where it may help the state of Texas overall.&quot; UT Chancellor William McRaven announced Nov. 5 that he intended to purchase the land â&amp;#x20AC;&amp;#x201D; not for a full campus, but for a collaboration and research center that would attract new investment to the state&#39;s fourth-largest city. Concerns soon arose, however, that the UT facility could drain research money or coveted faculty from UH. McRaven has repeatedly said that he has no intention of competing with Houston schools and would be open to working with them on the land. Rudley met with McRaven last month to discuss the issue and said on Tuesday that he liked what he heard. &quot;He&#39;s an honorable guy,&quot; Rudley said. &quot;Sometimes you have to look to the people who bring you something. If you look to the guy who has been to war and battle, I tend to trust what he has to say. I at least want to hear what he has to say. And if he says he&#39;s going to do something, I believe he&#39;s going to do it.&quot; TSU has not seen an increase in state funding in seven years and last year saw the deepest budget cuts of any university in the state -- a nearly 5 percent reduction in funding. Working with UT in Houston could benefit the school, Rudley said. &quot;I think we should listen and see where Texas Southern can fit in and where it could possibly be a good move for Texas Southern,&quot; he said. Reprinted from the Houston Chronicle

The Percussion Center is Houstonâ&amp;#x20AC;&amp;#x2122;s number one drum and percussion specialty store. We have served the Houston area for over twenty-five years with the best customer service, prices and the most knowledgeable and dedicated teachers around. A Proud Supporter of the Texas Southern University Ocean of Soul and the Texas Southern University National Alumni Association Ocean of Soul Chapter

All alumni are invited to attend. Wear any TSU paraphernalia to the game and receive your alumni discounted ticket price. For more information call 713-313-1361