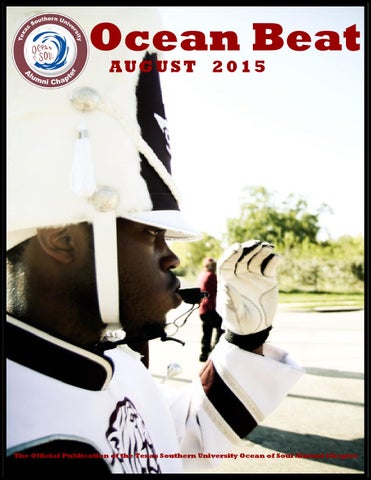 Alumni Announcements Band Dinner &amp; Refreshments The Ocean of Soul Alumni Chapter is looking for volunteers to provide donations to help feed the incoming freshmen, Saturday, August 15 after the evening rehearsal. The Freshmen arrive on Friday, August 14, however, the University Cafeteria will not be available until Sunday so we are asking Ocean Alumni for assistance with this matter. Please contact Garnet Foster at g.foster_04@yahoo.com for the list of items needed for the dinner.

Meeting Time and Date Football season is approaching and the Alumni Chapter meetings, currently scheduled for Saturday evenings, will conflict with TSU Football. The Alumni Chapter is looking into other options, such as moving the Alumni meeting to Saturdays mornings or to a completely different day and time. Please send your suggestions to Oceanalumni@gmail.com

The Ocean of Soul Alumni Chapter is having a clearance sale of last yearâ&amp;#x20AC;&amp;#x2122;s Homecoming Shirt. All sizes are available except Large. Contact Oceanalumni@gmail.com for more information Shirts are $7($5 for paid members)

Freshmen Orientation Calling All TSU Alumni We would like alumni to assist with FRESHMAN ORIENTATION Join us on Monday, August 17, 2015 8:00 a.m. to 12:00 noon Parking will be available behind the Sterling Student Life Center in parking lot S1 Give back to students at TSU by assisting with registration during our 2015 Freshman Orientation. Alumni will greet Freshman Tigers and their families during orientation. Please wear your TSU Alumni T-Shirt. We cannot make this event a success without the help of our dedicated alumni. We look forward to your participation as alumni pass on the Tiger spirit and welcome incoming Freshman to campus for the first time this year! Sharing is caring! Pass this along to other Alumni you know. Let&#39;s show the students that TSU is not just for four years, it&#39;s for life! Go Tigers! After registration freshmen will take the Tiger Paw Oath and be pinned as official members of the Pre-Alumni Association. All alumni present are asked to help with the pinning ceremony. For more information, please contact the Office of Alumni Relations &amp; Special Events at 713-313-1361 or tsulumni@tsu.edu. We look forward to seeing you on August 17th.

The Sheraton Suites Hotel near the Galleria 2400 W. Loop South

Spring Hill Suites Houston Downtown/Convention Center 914 Dallas @ Main Street The University will recognize the Classes of 1965, 1990 and 2005 celebrating 50, 25 and 10 years during Homecoming.

We will also celebrate all women who resided in Lanier Hall for Women . Call the Office of Alumni Relations at 713-313-1361 or email tsualumni@tsu.edu and we will forward you the name and contact information for your class leader.

Hey Ocean! This past spring, the OOSAA started a mentor program for current students in the Ocean of Soul. In the program, Alumni were assigned 1-3 students to keep in touch with throughout the semester in an attempt to create relationships, bridge the gaps between alumni and current students, and assist the students if needed. We are currently in need of more mentors to work with the incoming freshmen. If you are interested in signing up, please contact Joselyn Coats at jayone_99@yahoo.com for more details.

“THEOCEANOFSOULMATTERS” Support the Ocean of Soul