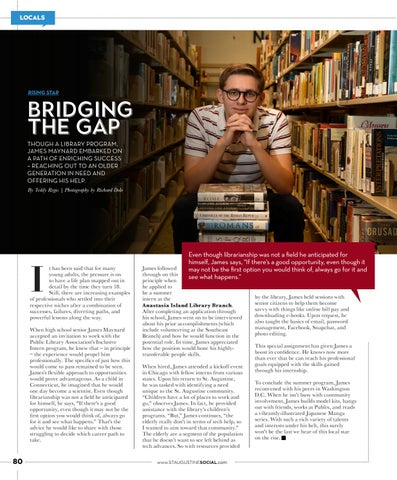 BRIDGING THE GAP THOUGH A LIBRARY PROGRAM, JAMES MAYNARD EMBARKED ON A PATH OF ENRICHING SUCCESS – REACHING OUT TO AN OLDER GENERATION IN NEED AND OFFERING HIS HELP. By Teddy Regis | Photography by Richard Dole

t has been said that for many young adults, the pressure is on to have a life plan mapped out in detail by the time they turn 18. Still, there are increasing examples of professionals who settled into their respective niches after a combination of successes, failures, diverting paths, and powerful lessons along the way. When high school senior James Maynard accepted an invitation to work with the Public Library Association's Inclusive Intern program, he knew that – in principle – the experience would propel him professionally. The specifics of just how this would come to pass remained to be seen. James’s flexible approach to opportunities would prove advantageous. As a child in Connecticut, he imagined that he would one day become a scientist. Even though librarianship was not a field he anticipated for himself, he says, "If there's a good opportunity, even though it may not be the first option you would think of, always go for it and see what happens.” That's the advice he would like to share with those struggling to decide which career path to take.

Even though librarianship was not a field he anticipated for himself, James says, "If there's a good opportunity, even though it may not be the first option you would think of, always go for it and see what happens.”

James followed through on this principle when he applied to be a summer intern at the Anastasia Island Library Branch. After completing an application through his school, James went on to be interviewed about his prior accomplishments (which include volunteering at the Southeast Branch) and how he would function in the potential role. In time, James appreciated how the position would hone his highlytransferable people skills.

When hired, James attended a kickoff event in Chicago with fellow interns from various states. Upon his return to St. Augustine, he was tasked with identifying a need unique to the St. Augustine community. “Children have a lot of places to work and go,” observes James. In fact, he provided assistance with the library’s children’s programs. “But,” James continues, “the elderly really don't in terms of tech help, so I wanted to aim toward that community.” The elderly are a segment of the population that he doesn’t want to see left behind as tech advances. So with resources provided www.STAUGUSTINESOCIAL.com

by the library, James held sessions with senior citizens to help them become savvy with things like online bill pay and downloading e-books. Upon request, he also taught the basics of email, password management, Facebook, Snapchat, and photo editing. This special assignment has given James a boost in confidence. He knows now more than ever that he can reach his professional goals equipped with the skills gained through his internship. To conclude the summer program, James reconvened with his peers in Washington D.C. When he isn’t busy with community involvement, James builds model kits, hangs out with friends, works at Publix, and reads a vibrantly-illustrated Japanese Manga series. With such a rich variety of talents and interests under his belt, this surely won't be the last we hear of this local star on the rise. 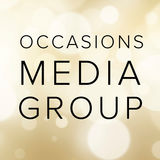 From a veteran who’s healing through yoga to a dad who started an international movement, find some inspiration from the locals who are doin...

From a veteran who’s healing through yoga to a dad who started an international movement, find some inspiration from the locals who are doin...