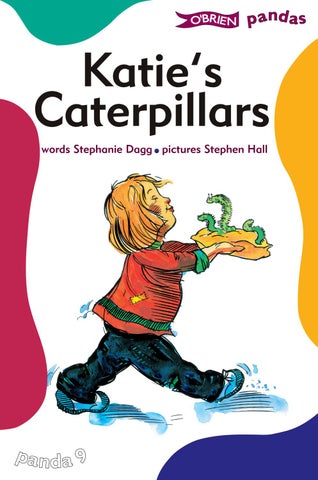 STEPHANIE DAGG lives in West Cork and works as an editor. You can read more about Katie&#39;s adventures in Katie&#39;s Cake. Stephanie has also written The Big Brother in the PANDA series and Anna&#39;s Secret Granny in the FLYER series.

Katie has strange pets – her lovely caterpillars. Curly, Twisty, Greedy and all the others live in a big glass tank. But not for long!

PANDA books are for young readers making their own way through books.

Copyright for text © Stephanie Dagg Copyright for illustrations and layout © The O Brien Press Ltd. All rights reserved. No part of this book may be reproduced or utilised in any way or by any means, electronic or mechanical, including photocopying, recording or by any information storage and retrieval system without permission in writing from the publisher. British Library Cataloguing-in-Publication Data A catalogue record for this title is available from The British Library

Can YOU spot the panda hidden in the story?

She talked to them. She picked them up in her hand and stroked them.

If she found them on grotty old weeds, she carefully lifted them off and carried them over to Mumâ&amp;#x20AC;&amp;#x2122;s best

The caterpillars loved the roses. They chomped away merrily.

But one day Mum found out what Katie was doing and she got very, very cross.

So after that, Katie left them where they were.

When it was too wet or too cold to go outside, Katie stayed in and drew pictures of caterpillars.

When she got tired of that, she painted pictures of caterpillars.

Then she made models of caterpillars out of playdough. 13

wriggled around on the floor â&amp;#x20AC;&amp;#x201C; just like a caterpillar!

After a while, Mum got a bit fed up with caterpillars.

‘Would you like a goldfish?’ she asked Katie one day.

‘There’s an old fish tank in the loft that you could keep it in.’

‘Well, how about a guinea

suggested Mum. ‘Or a kitten?

So Mum said no more.

But Katie came to her a few hours later. ‘Mum, I’ve changed my mind. I would like a pet,’ she said. ‘And what would you like?’ asked Mum, amazed.

‘OK,’ said Mum wearily. ‘I don’t see why not. I’ll go and get that fish tank. It will be perfect for caterpillars.’

Katie helped Mum clean the dust and cobwebs off the tank.

She watched Mum make a lid with lots of holes in it. 23

They went out to the garden and put some earth and grass at the bottom of the tank. Then Mum cut off twigs from different bushes.

Katie arranged them nicely in the fish tank.

twenty caterpillars of different shapes, sizes and colours, and popped them into their new home.

Katie was delighted with her new pets.

She loved each one and gave it a special name.

There was Curly and Twisty,

She looked after them very carefully, making sure the tank was kept in a shady place and finding new leaves when the old ones were eaten.

The caterpillars got bigger and fatter every day. 29

But soon it was time to go on holiday to Auntie Susan’s. Mum got the suitcases down. The first thing Katie packed was the

‘Oh no,’ said Mum sternly. ‘The caterpillars are NOT coming!’ 30

‘You’ll have to let them go in the garden then,’ said Mum. ‘There is plenty of grass there for them.’

not throwing my pets away!’

‘I never said you had to throw them away–’ began Mum. But Katie had rushed off, howling.

Mum sighed, and went to calm her down. ‘I’ve got an idea,’ she told her.

Together they went around to see Mrs Murphy next door. She was very fond of Katie. She agreed at once to look after the caterpillars while Katie was away.

(Mrs Murphy was so nice she would look after a crocodile for Katie!)

Next morning Katie took the caterpillars to Mrs Murphyâ&amp;#x20AC;&amp;#x2122;s house with strict instructions on how they should be cared for. 37

Then she and Mum set off in the car. Katie was quite excited because Mum told her she might find some different kinds of caterpillars in Auntie Susanâ&amp;#x20AC;&amp;#x2122;s garden. Katie hoped so.

But Auntie Susan put her foot down.

‘There will be NO caterpillar hunting here!’ she said. ‘Is that clear, Katie? You can play with my kitten instead.’

But she could not wait to see her

Ten days later, Mum and Katie got back home. It was late at night but Katie went to collect her caterpillars straight away.

She gave Mrs Murphy a box of chocolates for looking after them.

She peered into the tank when she got it back to her bedroom.

Mum looked into the tank. ‘No, I can’t see any either, but I’m very tired. Off to bed now. We’ll have a proper hunt in the morning.’

Katie went to bed â&amp;#x20AC;&amp;#x201C; but she did not sleep. She got up a couple of times to look into the fish tank in the moonlight. She could see little wrinkled packages clinging to some of the twigs. But definitely

Next day Mum was woken up by a loud scream. She raced to Katie’s bedroom. ‘What is it?’ she asked.

rotten old butterflies and they’ve eaten my caterpillars, all of them.’ Katie started to cry.

‘You know that caterpillars turn into butterflies, Katie, don’t you? I’m sure I’ve told you about that!’

Katie was horrified. If Mum had told her, she had completely forgotten.

soppy and daft as a butterfly?

In disgust she took the tank outside.

She watched for a little while as the new butterflies dried their wings and then, one by one, flew off into the wide world.

scuttled across the garden path in front of her.

Beetles were nice and she knew for certain that

STEPHANIE DAGG lives in West Cork and works as an editor. You can read more about Katie&#39;s adventures in Katie&#39;s Cake. Stephanie has also written The Big Brother in the PANDA series and Anna&#39;s Secret Granny in the FLYER series.

Katie has strange pets – her lovely caterpillars. Curly, Twisty, Greedy and all the others live in a big glass tank. But not for long!

Katie just loves her pet caterpillars. Then she goes on holiday and can't wait to greet them on her return. To her dismay they have changed! Who wants silly old butterflies as pets? Not our Katie … 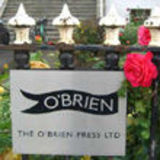