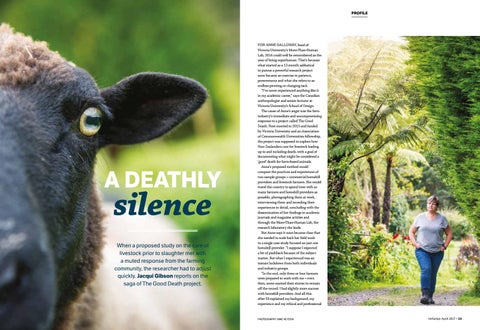 silence When a proposed study on the care of livestock prior to slaughter met with a muted response from the farming community, the researcher had to adjust quickly. Jacqui Gibson reports on the saga of The Good Death project.

FOR ANNE GALLOWAY, head of Victoria University’s More-Than-Human Lab, 2016 could well be remembered as the year of being superhuman. That’s because what started as a 12-month sabbatical to pursue a powerful research project soon became an exercise in patience, perseverance and what she refers to as endless pivoting or changing tack. “I’ve never experienced anything like it in my academic career,” says the Canadian anthropologist and senior lecturer at Victoria University’s School of Design. The cause of Anne’s angst was the farm industry’s immediate and uncompromising response to a project called The Good Death. First mooted in 2015 and funded by Victoria University and an Association of Commonwealth Universities fellowship, the project was supposed to explore how New Zealanders care for livestock leading up to and including death, with a goal of documenting what might be considered a ‘good’ death for farm-based animals. Anne’s proposed method would compare the practices and experiences of two sample groups – commercial homekill providers and livestock farmers. She would travel the country to spend time with as many farmers and homekill providers as possible, photographing them at work, interviewing them and recording their experiences in detail, concluding with the dissemination of her findings in academic journals and magazine articles and through the More-Than-Human Lab, the research laboratory she leads. But Anne says it soon became clear that she needed to scale back her field work to a single case study focused on just one homekill provider. “I suppose I expected a bit of pushback because of the subject matter. But what I experienced was an instant lockdown from both individuals and industry groups. “In the end, only three or four farmers were prepared to work with me – even then, some wanted their stories to remain off the record. I had slightly more success with homekill providers. And all this after I’d explained my background, my experience and my ethical and professional

commitment to capturing their perspectives, their stories. I said, ‘Look, this isn’t my story to tell; it’s yours’.” Anne attributes the industry’s reluctance to talk openly about animal slaughter to several key factors. “I think farmers feel persecuted right now. They feel they’re swimming against the tide of public opinion, particularly on issues of animal welfare. Just about everybody I talked to brought up the bobby calf issue and animal rights activism. “Also, killing is just really difficult to talk about. It’s taboo. In a year, I didn’t meet anyone who took it lightly. So asking people to open up and tell me their stories of slaughtering or euthanising animals was always going to be challenging – asking people to talk about examples of it going wrong even more so.” The plan from here is to press on with writing up her project findings. A lifestyle farmer herself, she says she learned a lot worth sharing with the research community, policy-makers and the farm industry. Massey University animal welfare scientist David Mellor has expressed interest in staying abreast of the project, and Anne hopes to evoke a similar response from MPI. In her writing she will explore some of the main methods and practices used today and draw on real-life experiences to offer insights into how farm animals can be killed both humanely and efficiently. She may even reflect on the links between routine animal slaughter and the burden it places on the mental health of farmers. She says the study is the start of what she hopes will be an ongoing conversation about the topic. “Without transparency, without being open about these things, it’s impossible to protect what works well and, similarly, to make improvements where they’re needed.” In the future, she’d like veterinarians to join the debate and contribute advice on topics such as the benefits and challenges of on-farm killing, the impacts of transport on the stress levels of livestock and the differences (if any) between killing an animal separately or within a herd.

“If my study highlighted anything, it showed me we do need to look more closely at this issue. But we need to give people time to think about where they stand and see the value in taking that step.” Anne isn’t shy of placing herself and her work at the centre of controversial issues. She and her colleague Catherine Caudwell, also a School of Design lecturer within the More-Than-Human Lab, have investigated public attitudes towards Gareth Morgan’s ‘Cats to Go’ campaign, a conservation campaign to control household moggies in order to protect native birds.

“KILLING IS REALLY DIFFICULT TO TALK ABOUT. IT’S TABOO. IN A YEAR, I DIDN’T MEET ANYONE WHO TOOK IT LIGHTLY.”

She’s also written about the need for more transparency in and public debate on the topic of live animal exports and other animal welfare issues, and completed a project exploring the ethical consumerism of merino wool and meat. It’s this work and other animal-centred projects that make up the bulk of the research carried out in the lab. “I’m an anthropologist who studies animals and their relationships with humans – so I’m a bit fringe in that respect.” As a rule, she says, anthropologists study human society and culture. “But in

our work, we put animals, plants, land, water and air at the centre. It’s an exciting approach. We get to use our imaginations to question the order of things and to think about the world in completely different ways.” In March, audience members of the Animal Behaviour and Welfare Consultative Committee meeting were treated to the opportunity to do just that during Anne’s presentation. In it, she asked meetinggoers to contemplate a world where livestock were no longer private property and were instead treated as a public good much like water. What type of impact on farming policy would that scenario bring? How would it change our relationship with the country’s livestock? It’s easy to get the feeling, talking to Anne, that this scenario is one that holds personal appeal for several reasons. For one, it introduces the notion of acquiring a social licence to farm and having to garner input and acceptance from the wider community. This in turn would allow for a broader interpretation of farming and how it might be carried out. Anne’s own experience of raising Arapawa sheep on her small farmlet in Reikorangi, near Waikanae, is both conventional and unconventional. Like many lifestylers, she and her partner are

rearing a small flock of lambs to eat. A homekill provider will slaughter two lambs prior to winter and two afterwards, so the couple can compare prime lamb and hogget. One lamb will be kept for breeding. Anne will watch the animals being slaughtered and butchered and observe the hide tanning process. Yet Anne has named each member of the flock: Melvin, Mingus, Edith, Glory and Victoria. And she recognises each one for its unique personality and character. “I spend a lot of time with them,” she says. “My neighbours laugh, but I have a chair set up in the paddock so it’s comfortable to be with them. To me, it’s been important to get to know them as individuals and experience them in this way. I try not to eat meat I haven’t produced, but that doesn’t mean I have to keep my distance. “As a farmer, I understand there’s no live stock without dead stock. But I don’t believe livestock are inherently killable or predestined for the plate. That’s a choice people make and I don’t think it should be an easy choice.” Anne, who joined Victoria University in 2009 after a year’s tenure as assistant professor in design and computational arts with Concordia University in Montreal, grew up around beef cattle farmers.

“My grandfather and uncle were Hereford farmers in the foothills of Alberta’s Rockies. I’d visit them in the summer to help with calving and farm life.” This year Anne will become a New Zealand citizen, joining a country where farming remains the backbone of the economy. “What is important to me is to care for my farm animals. I want them to live well and I want to do what I can to make sure they have a good death. “Ideally, that means there’s no suffering in the lead-up to and during death. My belief is that they should never see it coming.”

WANT TO KNOW MORE? • To find out about the More-Than-Human Lab’s past and present projects, and to read Dr Anne Galloway’s blog, go to www.morethanhumanlab.org. • Interested in The Good Death project? Contact Dr Anne Galloway directly at anne.galloway@vuw.ac.nz. 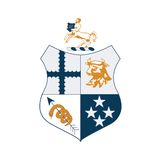