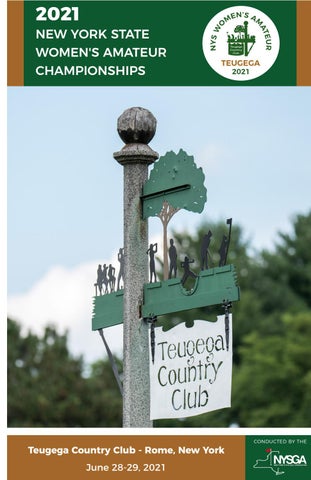 WELCOME To all the participants, spectators, and volunteers, I bid you welcome to the New York State Women&#39;s Amateur Championships. Once again, the New York State Golf Association is privileged to join with the management and staff of Teugega Country Club to provide a memorable challenge in crowning New York’s premier women&#39;s amateur and mid-amateur golfers. It is a great pleasure to return to this historic Donald Ross design, which has been the site of several memorable New York State Championships, including the 1978 Women&#39;s Amateur, 1962 Women&#39;s Senior Amateur, 2014 Men&#39;s Mid-Amateur, 2019 Mixed Team Amateur and three Girl&#39;s Junior Amateurs (1965, 1974, 1984). On behalf of the entire New York State Golf Association, I would like to offer our appreciation and thanks to the management, clubhouse staff, Golf Professional staff, and especially the course grounds crew of Teugega, whose combined efforts has provided us with this wonderful venue at the foothills of the Adirondacks in historic Rome. As past experience has demonstrated, we certainly expect an exciting championship competition, which will challenge the golfers to employ all of their golfing skills. Additional thanks go out to our dedicated NYSGA staff who, with our tournament volunteers, work so hard to provide a tournament worthy of the talented competitors. This is a wonderful opportunity to put the past year of the COVID-19 pandemic behind us and focus on the true enjoyment that the game of golf brings us. So, here’s wishing all the participants the best of luck and, no matter the outcome, please enjoy this experience and the great memories this beautiful venue will bring you. Sincerely,

CONDITIONS OF PLAY Eligibility The championship is open to female amateur golfers who are members of the NYSGA (defined as either belonging to an NYSGA member club or joining the NYSGA directly as an eClub member), and have an active USGA Handicap Index issued by the NYSGA member club.

Format This championship is a two-day stroke play competition. There is a cut in the Women&#39;s Amateur after 36 holes to the low 50% and ties and any player within 10 strokes of the lead. The Women&#39;s Mid-Amateur will be a 36-hole competition, without a cut.

Caddies A player may provide her own caddie. No caddies are available through the host club. All caddies will be required to use an NYSGA bib during practice and competition rounds.

Teugega Country Club, located in Rome, was founded in February 1899 by Franklin Ethridge. Known as “the father of golf”, Ethridge brought together 125 townsmen to create the first ever golf course in the city. Eugene Rowland nominated the name &quot;Te-uge-ga,&quot; referenced in the 1851 Annals of Oneida County as the local Native American&#39;s designation for the Mohawk River. In 1900, land along the Mohawk River, today known as Mohawk Acres, was officially leased and Teugega Country Club opened for play on their new 9-hole course on Decoration Day. By 1912, members of Teugega declared that the original nine holes were no longer challenging. The Greens Committee was established and instructed to develop additional hazards to make the course harder. The original course was built on very poor ground for golfing. If Teugega was to grow, a new course would have to be built elsewhere. Donald Ross was hired by Teugega to design a new 18-hole course six miles north at Lake Delta. Ross worked from topographic maps, drawing up blueprints for his course routings, famous for requiring little walking from one green to the next tee. On Independence Day weekend 1921, Teugega opened its’ new 18-hole course. The finished course reflects many of the hallmarks of a Ross-designed course. The basic routing of the holes unfolds in a fan-shape, with the clubhouse at the handle. A century later, Teugega is celebrating its centennial year as one of the best remaining legacies of Ross. The 1st tee, 9th green, 10th tee and 18th green all lie within easy pitching distance from the clubhouse. The holes themselves zigzag across the terrain without consecutive fairways racing down the same direction.

Past Champions of the New York State

Each hole includes yardages for both the amateur and mid-amateur divisions.

ROSENBERG SECURES TITLE IN PLAYOFF DOWN TO THE WIRE

Jennifer Rosenberg captured her first state title at the 90th New York State Women’s Amateur Championship in a two-hole playoff at Lancaster Country Club. After 54 holes, Rosenberg of Glen Oaks Club and Chelsea Dantonio of Crag Burn Golf Club were tied atop the leaderboard at two-under 217. Rosenberg carded a 70-75-72 over the three rounds, while Dantonio shot a 76-76-65. Dantonio, who was runner-up at last year&#39;s championship, was seven strokes back from Rosenberg entering the final round. She proceeded to play an incredible, mistake-free 18 holes that included eight birdies and ten pars to climb into contention. She caught fire on holes 9 throught 12 with four straight birdies, which brought her into a tie with the two-round leader. Rosenberg birdied the thirteenth hole to regain lead by a stroke, until the par-5 16th, where Dantonio knocked down a 35-foot birdie to even things again at 2-under. The duo made pars on their final two holes, leaving a playoff to decide the 2019 champion. On the first playoff hole, #18, Dantonio left herself with a 4-foot putt for birdie while Rosenberg missed the green left by a few feet. She almost chipped-in from a difficult downhill lie, her ball rolling just past the left edge of the cup. Dantonio was unable to convert her birdie, and the two remained on the eighteenth for the second hole of the playoff. The pair then hit almost identical drives down the middle of the fairway. Rosenberg went first and landed her shot 10 feet from the flagstick. Dantonio&#39;s ball rolled through the green leaving her a with a chip. Dantonio was then unable to get up-and-down, and Rosenberg made her par to secure the victory. Dantonio&#39;s eight-under 65 is a new course women’s record for Lancaster Country Club. Speaking on her round, Dantonio said, “I just tried to keep within myself the whole day and I made almost every good shot. I want to take it to the next level and to do that you have to shoot under par. Seeing that I could do that today, it felt really good.” Though Dantonio gave her a close scare, Rosenberg was able to secure the title after leading the field all week. “Today was a bit stressful. Chelsea played lights out and it was fun to watch. At one point I was cheering her on.” she explained. &quot;When we were on the playoff, I was in a 2021 NYS WOMEN&#39;S AMATEUR CHAMPIONSHIPS

2019 CHAMPIONSHIPS bad position and things looked like they were going to be different. But I kept my cool and stuck with my game plan.&quot; She alluded to her advantage off the tee when asked about how her game played into the 6,067-yard par 73 layout. &quot;I hit some good drives, my distance definitely helped on this course. It set me up pretty well all week.&quot; Rounding out the top five was 2013 NYS Girls&#39; Junior Champion Alexis Hios of Westchester Country Club at 226 (79-70-77), 2015 NYS Girls&#39; Junior Champion Maren Cipolla of Park Country Club at 227 (76-78-73), and last year’s champion Kyra Cox of Centennial Golf Club at 230 (76-78-76).

A two-over 75 during the final round, secured an 11-stroke victory for Jenna Hoecker at the 11th New York State Women’s Mid-Amateur Championship. Hoecker shot a 77-73-75 over the three days at Lancaster to secure her second, back-toback Mid-Am title. She was at the top of the leaderboard all week. This marks Hoecker’s third state title as she won the Women’s Amateur in 2013 at the Country Club of Ithaca. “This one was the most fun just because I haven’t been able to play as much as I want to, so I was able to test myself and compete with everyone,” she said. Teresa Cleland of Bellevue Country Club earned runner-up honors with a seventeen-over 236 finish (77-77-82). Cleland and Hoecker were tied for the lead after the first round. Though the three-time Mid-Am winner was unable to capture the top spot, she was just happy to be there. “It’s been a lot of fun. Jenna is such a good player. I had a disappointing finish, but I feel like I have had a pretty good week,” she said. Rounding out the top five was this year&#39;s NYS Women&#39;s Four-Ball Co-Champion Pennie Carlo of Crestwood Golf Club at 240 (78-78-84), 2018 NYS Women&#39;s Senior Champion Tammy Blyth of Monroe Golf Club at 246 (82-81-83), and 2017 Mid-Am Lauren Cupp of Yahnundasis Golf Club at 251 (82-84-85). NYSGA.ORG I #PLAYNYSGA

GOLF IN NEW YORK New York State has many local and regional golf associations that provide a variety of competitions and services to their members each season. We’d like to recognize our partner regional associations for the great work they do each year to consistently provide alternative tournament options for amateur golfers across the state.

SPECIAL THANK YOU TO OUR SPONSORS Please support our Sponsors! Their support of the NYSGA and golf community, helps us to strengthen our services, member benefits and tournament experiences. 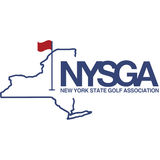