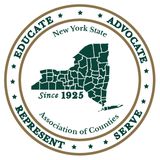 New York State Association of Counties' mission is to represent, educate, advocate for, and serve Member Counties and the thousands of elected and appointed county officials who serve the public.

We strive to educate, train and provide research on public policy to Federal, State and Local officials and to the membership on issues important to counties. We advocate for our 62 counties, including the City of New York, to the legislative and executive branches of government at the State and Federal levels.