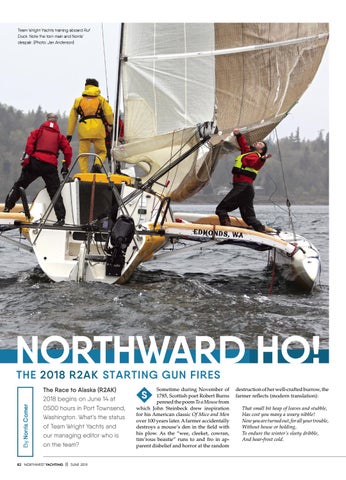 THE 2018 R2AK STARTING GUN FIRES The Race to Alaska (R2AK) 2018 begins on June 14 at 0500 hours in Port Townsend, Washington. What’s the status of Team Wright Yachts and our managing editor who is on the team?

Sometime during November of 1785, Scottish poet Robert Burns penned the poem To a Mouse from which John Steinbeck drew inspiration for his American classic Of Mice and Men over 100 years later. A farmer accidentally destroys a mouse’s den in the field with his plow. As the “wee, cleeket, cowran, tim’rous beastie” runs to and fro in apparent disbelief and horror at the random

destruction of her well-crafted burrow, the farmer reflects (modern translation): That small bit heap of leaves and stubble, Has cost you many a weary nibble! Now you are turned out, for all your trouble, Without house or holding, To endure the winter’s sleety dribble, And hoar-frost cold.

The latest on power and sail boating in the Northwest, featuring an Alaskan Glacier Safari; a look at Stand Up Paddleboards and which one's right for you; a trip through the Panama Canal; the last lead up to R2AK 2018; A trip to Gig Harbor, Washington, all about commissioning a new boat in our Ask the Experts, and much, much, more!