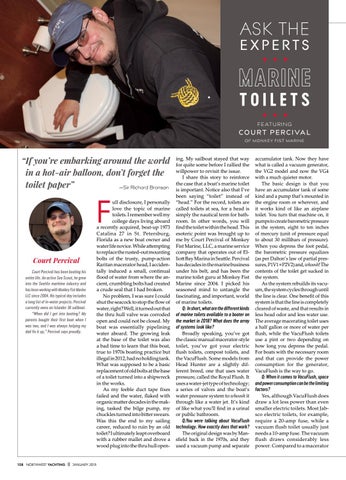 “If you’re embarking around the world in a hot-air balloon, don’t forget the toilet paper” —Sir Richard Branson

F Court Percival Court Percival has been boating his entire life. An active Sea Scout, he grew into the Seattle maritime industry and has been working with Monkey Fist Marine LLC since 2004. His typical day includes a long list of in-water projects. Percival currently owns an Islander 36 sailboat. “When did I get into boating? My parents bought their first boat when I was two, and I was always helping my dad fix it up,” Percival says proudly.

ull disclosure, I personally love the topic of marine toilets. I remember well my college days living aboard a recently acquired, beat-up 1973 Catalina 27 in St. Petersburg, Florida as a new boat owner and water life novice. While attempting to replace the rusted-out mounting bolts of the trusty, pump-action Raritan macerator head, I accidentally induced a small, continual ﬂood of water from where the ancient, crumbling bolts had created a crude seal that I had broken. No problem, I was sure I could shut the seacock to stop the ﬂow of water, right? Well, it turned out that the thru hull valve was corroded open and could not be closed. My boat was essentially pipelining water aboard. The growing leak at the base of the toilet was also a bad time to learn that this boat, true to 1970s boating practice but illegal in 2012, had no holding tank. What was supposed to be a basic replacement of old bolts at the base of a toilet turned into a shipwreck in the works. As my feeble duct tape ﬁxes failed and the water, ﬂaked with organic matter decades in the making, tasked the bilge pump, my chuckles turned into bitter swears. Was this the end to my sailing career, reduced to ruin by an old toilet? I ultimately leapt overboard with a rubber mallet and drove a wood plug into the thru hull open-

ing. My sailboat stayed that way for quite some before I rallied the willpower to revisit the issue. I share this story to reinforce the case that a boat’s marine toilet is important. Notice also that I’ve been saying “toilet” instead of “head.” For the record, toilets are called toilets at sea, for a head is simply the nautical term for bathroom. In other words, you will ﬁnd the toilet within the head. This esoteric point was brought up to me by Court Percival of Monkey Fist Marine, LLC, a marine service company that operates out of Elliott Bay Marina in Seattle. Percival has decades in the marine business under his belt, and has been the marine toilet guru at Monkey Fist Marine since 2004. I picked his seasoned mind to untangle the fascinating, and important, world of marine toilets. Q: In short, what are the different kinds of marine toilets available to a boater on the market in 2018? What does the array of systems look like? Broadly speaking, you’ve got the classic manual macerator-style toilet, you’ve got your electric ﬂush toilets, compost toilets, and the VacuFlush. Some models from Head Hunter are a slightly different breed, one that uses water pressure, called the Royal Flush. It uses a water-jet type of technology; a series of valves and the boat’s water pressure system to whoosh it through like a water jet. It’s kind of like what you’ll ﬁnd in a urinal or public bathroom. Q:You were talking about VacuFlush technology. How exactly does that work? The original design was by Mansﬁeld back in the 1970s, and they used a vacuum pump and separate

accumulator tank. Now they have what is called a vacuum generator, the VG2 model and now the VG4 with a much quieter motor. The basic design is that you have an accumulator tank of some kind and a pump that’s mounted in the engine room or wherever, and it works kind of like an airplane toilet. You turn that machine on, it pumps to create barometric pressure in the system, eight to ten inches of mercury (unit of pressure equal to about 30 millibars of pressure). When you depress the foot pedal, the barometric pressure equalizes (as per Dalton’s law of partial pressures, P1V1 = P2V2) and, whoosh! The contents of the toilet get sucked in the system. As the system rebuilds its vacuum, the system cycles through until the line is clear. One beneﬁt of this system is that the line is completely cleared of waste, and that results in less head odor and less water use. The average macerating toilet uses a half gallon or more of water per ﬂush, while the VacuFlush toilets use a pint or two depending on how long you depress the pedal. For boats with the necessary room and that can provide the power consumption for the generator, VacuFlush is the way to go. Q: When it comes to VacuFlush, space and power consumption can be the limiting factors? Yes, although VacuFlush does draw a lot less power than even smaller electric toilets. Most Jabsco electric toilets, for example, require a 20-amp fuse, while a vacuum ﬂush toilet usually just needs a 10-amp fuse. The vacuum ﬂush draws considerably less power. Compared to a macerator

The latest on power and sail boating in the Northwest, featuring our annual Washington Marina Guide, a pro's guide to the upcoming Seattle Boat Show, our R2AK participation announcement, a maritime lawyer weighs in on cannabis laws/rights, we explore La Paz, Mexico, talk marine toilets in our Ask the Experts, and more, more, more!