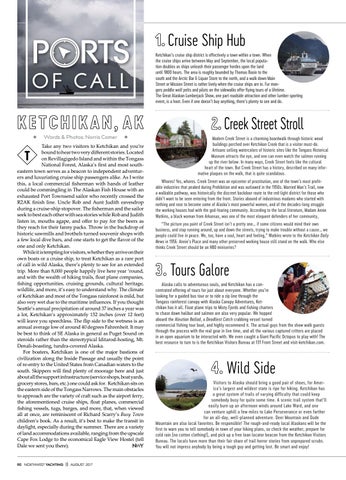 P RTS OF CALL Words &amp; Photos: Norris Comer Take any two visitors to Ketchikan and you’re bound to hear two very diﬀerent stories. Located on Revillagigedo Island and within the Tongass National Forest, Alaska’s ﬁrst and most southeastern town serves as a beacon to independent adventurers and luxuriating cruise ship passengers alike. As I write this, a local commercial ﬁsherman with hands of leather could be commingling in The Alaskan Fish House with an exhausted Port Townsend sailor who recently crossed the R2AK ﬁnish line. Uncle Rob and Aunt Judith eavesdrop during a cruise-ship stopover. The ﬁsherman and the sailor seek to best each other with sea stories while Rob and Judith listen in, mouths agape, and oﬀer to pay for the beers as they reach for their fanny packs. Throw in the backdrop of historic sawmills and brothels turned souvenir shops with a few local dive bars, and one starts to get the ﬂavor of the one and only Ketchikan. While it is tempting for visitors, whether they arrive on their own boats or a cruise ship, to treat Ketchikan as a rare port of call in wild Alaska, there’s plenty to see for an extended trip. More than 8,000 people happily live here year ‘round, and with the wealth of hiking trails, ﬂoat plane companies, ﬁshing opportunities, cruising grounds, cultural heritage, wildlife, and more, it’s easy to understand why. The climate of Ketchikan and most of the Tongass rainforest is mild, but also very wet due to the maritime inﬂuences. If you thought Seattle’s annual precipitation of around 37 inches a year was a lot, Ketchikan’s approximately 152 inches (over 12 feet) will leave you speechless. The ﬂip side to the wetness is an annual average low of around 40 degrees Fahrenheit. It may be best to think of SE Alaska in general as Puget Sound on steroids rather than the stereotypical Iditarod-hosting, Mt. Denali-boasting, tundra-covered Alaska. For boaters, Ketchikan is one of the major bastions of civilization along the Inside Passage and usually the point of re-entry to the United States from Canadian waters to the south. Skippers will ﬁnd plenty of moorage here and just about all the support infrastructure (service shops, boat yards, grocery stores, bars, etc.) one could ask for. Ketchikan sits on the eastern side of the Tongass Narrows. The main obstacles to approach are the variety of craft such as the airport ferry, the aforementioned cruise ships, ﬂoat planes, commercial ﬁshing vessels, tugs, barges, and more, that, when viewed all at once, are reminiscent of Richard Scarry’s Busy Town children’s book. As a result, it’s best to make the transit in daylight, especially during the summer. There are a variety of land accommodations available, ranging from the upscale Cape Fox Lodge to the economical Eagle View Hostel (tell Dale we sent you there).

Cruise Ship Hub Ketchikan’s cruise ship district is effectively a town within a town. When the cruise ships arrive between May and September, the local population doubles as ships unleash their passenger hordes upon the land until 1800 hours. The area is roughly bounded by Thomas Basin to the south and the Arctic Bar &amp; Liquor Store to the north, and a walk down Main Street or Mission Street is rather lively when the cruise ships are in. Fur mongers peddle wolf pelts and pilots on the sidewalks offer flying tours of a lifetime. The Great Alaskan Lumberjack Show, one part roadside attraction and other lumber sporting event, is a hoot. Even if one doesn’t buy anything, there’s plenty to see and do.

Creek Street Stroll Modern Creek Street is a charming boardwalk through historic wood buildings perched over Ketchikan Creek that is a visitor must-do. Artisans selling watercolors of historic sites like the Tongass Historical Museum attracts the eye, and one can even watch the salmon running up the river below. In many ways, Creek Street feels like the cultural heart of the town. But Creek Street has a history, described on many informative plaques on the walk, that is quite scandalous. Whores! Yes, whores. Creek Street was an epicenter of prostitution, one of the town’s most profitable industries that peaked during Prohibition and was outlawed in the 1950s. Married Man’s Trail, now a walkable pathway, was historically the discreet backdoor route to the red-light district for those who didn’t want to be seen entering from the front. Stories abound of industrious madams who started with nothing and rose to become some of Alaska’s most powerful women, and of the decades-long struggle the working houses had with the god-fearing community. According to the local literature, Madam Annie Watkins, a black woman from Arkansas, was one of the most eloquent defenders of her community, “The picture you paint of Creek Street isn’t a pretty one… if some citizens would mind their own business, and stop running around, up and down the streets, trying to make trouble without a cause… we people could live in peace. We, too, have a soul, heart and feeling,” Watkins wrote to the Ketchikan Daily News in 1956. Annie’s Place and many other preserved working house still stand on the walk. Who else thinks Creek Street should be an HBO miniseries?

Tours Galore Alaska calls to adventurous souls, and Ketchikan has a concentrated offering of tours for just about everyone. Whether you’re looking for a guided bus tour or to ride a zip line through the Tongass rainforest canopy with Alaska Canopy Adventures, Ketchikan has it all. Float plane trips to Misty Fjords and fishing charters to chase down halibut and salmon are also very popular. We hopped aboard the Aleutian Ballad, a Deadliest Catch crabbing vessel turned commercial fishing tour boat, and highly recommend it. The actual guys from the show walk guests through the process with the real gear in live time, and all the various captured critters are placed in an open aquarium to be interacted with. We even caught a Giant Pacific Octopus to play with! The best resource to turn to is the Ketchikan Visitors Bureau at 131 Front Street and visit-ketchikan.com.

Wild Side Visitors to Alaska should bring a good pair of shoes, for America’s largest and wildest state is ripe for hiking. Ketchikan has a great system of trails of varying difficulty that could keep somebody busy for quite some time. A scenic trail system that’ll easily burn up an afternoon winds around Lake Ward, and one can venture uphill a few miles to Lake Perseverance or even farther for an all-day, well-planned adventure. Deer Mountain and Dude Mountain are also local favorites. Be responsible! The rough-and-ready local Alaskans will be the first to warn you to tell somebody in town of your hiking plans, so check the weather, prepare for cold rain (no cotton clothing!), and pick up a free loan locator beacon from the Ketchikan Visitors Bureau. The locals have more than their fair share of trail horror stories from unprepared scrubs. You will not impress anybody by being a tough guy and getting lost. Be smart and enjoy!

All the latest on Power Boating & Sail in the Northwest, featuring a trip through Alaska (and Beyond) with Aspen Power Catamarans, a visit to Haida Gwaii in B.C., Racing in the Van Isle 360, a pro's advice on becoming a better captain, a visit to Ketchikan, Alaska, and much more!