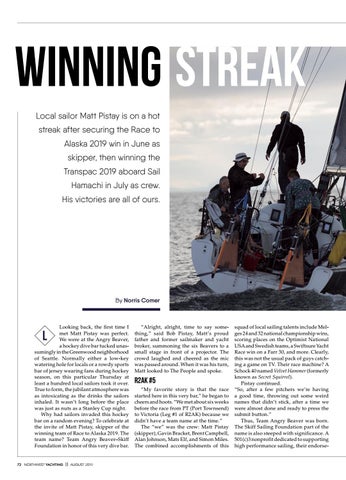 WINNING STREAK Local sailor Matt Pistay is on a hot streak after securing the Race to Alaska 2019 win in June as skipper, then winning the Transpac 2019 aboard Sail Hamachi in July as crew. His victories are all of ours.

Looking back, the first time I met Matt Pistay was perfect. We were at the Angry Beaver, a hockey dive bar tucked unassumingly in the Greenwood neighborhood of Seattle. Normally either a low-key watering hole for locals or a rowdy sports bar of jersey wearing fans during hockey season, on this particular Thursday at least a hundred local sailors took it over. True to form, the jubilant atmosphere was as intoxicating as the drinks the sailors inhaled. It wasn’t long before the place was just as nuts as a Stanley Cup night. Why had sailors invaded this hockey bar on a random evening? To celebrate at the invite of Matt Pistay, skipper of the winning team of Race to Alaska 2019. The team name? Team Angry Beaver–Skiff Foundation in honor of this very dive bar.

“Alright, alright, time to say something,” said Bob Pistay, Matt’s proud father and former sailmaker and yacht broker, summoning the six Beavers to a small stage in front of a projector. The crowd laughed and cheered as the mic was passed around. When it was his turn, Matt looked to The People and spoke.

R2AK #5 “My favorite story is that the race started here in this very bar,” he began to cheers and hoots. “We met about six weeks before the race from PT (Port Townsend) to Victoria (Leg #1 of R2AK) because we didn’t have a team name at the time.” The “we” was the crew: Matt Pistay (skipper), Gavin Bracket, Brent Campbell, Alan Johnson, Mats Elf, and Simon Miles. The combined accomplishments of this

squad of local sailing talents include Melges 24 and 32 national championship wins, scoring places on the Optimist National USA and Swedish teams, a Swiftsure Yacht Race win on a Farr 30, and more. Clearly, this was not the usual pack of guys catching a game on TV. Their race machine? A Schock 40 named Velvet Hammer (formerly known as Secret Squirrel). Pistay continued. “So, after a few pitchers we’re having a good time, throwing out some weird names that didn’t stick, after a time we were almost done and ready to press the submit button.” Thus, Team Angry Beaver was born. The Skiff Sailing Foundation part of the name is also steeped with significance. A 501(c)3 nonprofit dedicated to supporting high performance sailing, their endorse-

The best of boating lifestyle in the Pacific Northwest - featuring a trip to the Kenai Peninsula aboard a classic 80' Burger yacht, the interlocking victories in R2AK and Transpac 2019, Rowing and perseverance with Lia Ditton, Part 2 of our Towing & Recovery advice, a trip to Vashon Island, and much more!