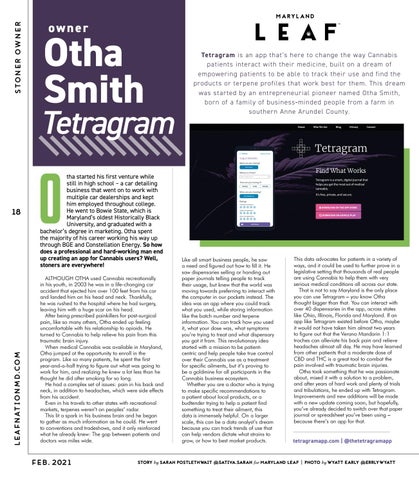 Tetragram is an app that’s here to change the way Cannabis patients interact with their medicine, built on a dream of empowering patients to be able to track their use and find the products or terpene profiles that work best for them. This dream was started by an entrepreneurial pioneer named Otha Smith, born of a family of business-minded people from a farm in southern Anne Arundel County.

tha started his first venture while still in high school – a car detailing business that went on to work with multiple car dealerships and kept him employed throughout college. He went to Bowie State, which is Maryland’s oldest Historically Black University, and graduated with a bachelor’s degree in marketing. Otha spent the majority of his career working his way up through BGE and Constellation Energy. So how does a professional and hard-working man end up creating an app for Cannabis users? Well, stoners are everywhere! ALTHOUGH OTHA used Cannabis recreationally in his youth, in 2003 he was in a life-changing car accident that ejected him over 100 feet from his car and landed him on his head and neck. Thankfully, he was rushed to the hospital where he had surgery, leaving him with a huge scar on his head. After being prescribed painkillers for post-surgical pain, like so many others, Otha ended up feeling uncomfortable with his relationship to opioids. He turned to Cannabis to help relieve his pain from this traumatic brain injury. When medical Cannabis was available in Maryland, Otha jumped at the opportunity to enroll in the program. Like so many patients, he spent the first year-and-a-half trying to figure out what was going to work for him, and realizing he knew a lot less than he thought he did after smoking for so long. He had a complex set of issues: pain in his back and neck, in addition to headaches, which were side effects from his accident. Even in his travels to other states with recreational markets, terpenes weren’t on peoples’ radar. This lit a spark in his business brain and he began to gather as much information as he could. He went to conventions and tradeshows, and it only reinforced what he already knew: The gap between patients and doctors was miles wide.

Like all smart business people, he saw a need and figured out how to fill it. He saw dispensaries selling or handing out paper journals telling people to track their usage, but knew that the world was moving towards preferring to interact with the computer in our pockets instead. The idea was an app where you could track what you used, while storing information like the batch number and terpene information. You can track how you used it, what your dose was, what symptoms you’re trying to treat and what dispensary you got it from. This revolutionary idea started with a mission to be patientcentric and help people take true control over their Cannabis use as a treatment for specific ailments, but it’s proving to be a goldmine for all participants in the Cannabis business ecosystem. Whether you are a doctor who is trying to make specific recommendations to a patient about local products, or a budtender trying to help a patient find something to treat their ailment, this data is immensely helpful. On a larger scale, this can be a data analyst’s dream because you can track trends of use that can help vendors dictate what strains to grow, or how to best market products.

This data advocates for patients in a variety of ways, and it could be used to further prove in a legislative setting that thousands of real people are using Cannabis to help them with very serious medical conditions all across our state. That is not to say Maryland is the only place you can use Tetragram – you know Otha thought bigger than that. You can interact with over 40 dispensaries in the app, across states like Ohio, Illinois, Florida and Maryland. If an app like Tetragram existed before Otha, maybe it would not have taken him almost two years to figure out that the Verano Mandarin 1:1 troches can alleviate his back pain and relieve headaches almost all day. He may have learned from other patients that a moderate dose of CBD and THC is a great tool to combat the pain involved with traumatic brain injuries. Otha took something that he was passionate about, mixed it with a solution to a problem, and after years of hard work and plenty of trials and tribulations, he ended up with Tetragram. Improvements and new additions will be made with a new update coming soon, but hopefully, you’ve already decided to switch over that paper journal or spreadsheet you’ve been using – because there’s an app for that.