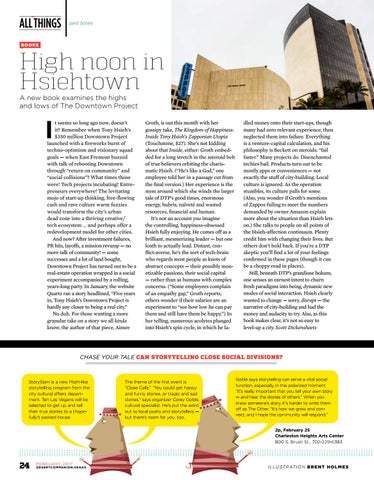 t seems so long ago now, doesn’t it? Remember when Tony Hsieh’s $350 million Downtown Project launched with a fireworks burst of techno-optimism and visionary squad goals — when East Fremont buzzed with talk of rebooting Downtown through “return on community” and “social collisions”? What times those were! Tech projects incubating! Entrepreneurs everywhere! The levitating mojo of start-up thinking, free-flowing cash and rave culture warm fuzzies would transform the city’s urban dead zone into a thriving creative/ tech ecosystem ... and perhaps offer a redevelopment model for other cities. And now? After investment failures, PR hits, layoffs, a mission revamp — no more talk of community! — some successes and a lot of land bought, Downtown Project has turned out to be a real-estate operation wrapped in a social experiment accompanied by a rolling, years-long party. In January, the website Quartz ran a story headlined, “Five years in, Tony Hsieh’s Downtown Project is hardly any closer to being a real city.” No duh. For those wanting a more granular take on a story we all kinda know, the author of that piece, Aimee

Groth, is out this month with her gossipy take, The Kingdom of Happiness: Inside Tony Hsieh’s Zapponian Utopia (Touchstone, $27). She’s not kidding about that Inside, either: Groth embedded for a long stretch in the asteroid belt of true believers orbiting the charismatic Hsieh. (“He’s like a God,” one employee told her in a passage cut from the final version.) Her experience is the stem around which she winds the larger tale of DTP’s good times, enormous energy, hubris, naïveté and wasted resources, financial and human. It’s not an account you imagine the controlling, happiness-obsessed Hsieh fully enjoying. He comes off as a brilliant, mesmerizing leader — but one loath to actually lead. Distant, conflict-averse, he’s the sort of tech-brain who regards most people as knots of abstract concepts — their possibly monetizable passions, their social capital — rather than as humans with complex concerns. (“Some employees complain of an empathy gap,” Groth reports; others wonder if their salaries are an experiment to “see how low he can pay them and still have them be happy.”) In her telling, numerous acolytes plunged into Hsieh’s spin cycle, in which he la-

dled money onto their start-ups, though many had zero relevant experience, then neglected them into failure. Everything is a venture-capital calculation, and his philosophy is Beckett on steroids: “fail faster.” Many projects do. Disenchanted techies bail. Products turn out to be mostly apps or conveniences — not exactly the stuff of city-building. Local culture is ignored. As the operation stumbles, its culture palls for some. (Also, you wonder if Groth’s mentions of Zappos failing to meet the numbers demanded by owner Amazon explain more about the situation than Hsieh lets on.) She talks to people on all points of the Hsieh-affection continuum. Plenty credit him with changing their lives. But others don’t hold back. If you’re a DTP skeptic you’ll find a lot of your feelings confirmed in these pages (though it can be a choppy read in places). Still, beneath DTP’s grandiose hokum, one senses an earnest intent to churn fresh paradigms into being, dynamic new modes of social interaction. Hsieh clearly wanted to change — sorry, disrupt — the narrative of city-building and had the money and audacity to try. Alas, as this book makes clear, it’s not so easy to level-up a city. Scott Dickensheets

StorySlam is a new Moth-like storytelling program from the city cultural affairs department. Ten Las Vegans will be selected to get up and tell their true stories to a (hopefully!) packed house.

The theme of the first event is “Close Calls.” “You could get happy and funny stories, or tragic and sad stories,” says organizer Corey Goble, cultural specialist. He’s put the word out to local poets and storytellers — but there’s room for you, too.

Goble says storytelling can serve a vital social function, especially in this polarized moment: “It’s really important that you tell your own story — and hear the stories of others.” When you know someone’s story, it’s harder to write them off as The Other. “It’s how we grow and connect, and I hope the community will respond.” 2p, February 25 Charleston Heights Arts Center 800 S. Brush St., 702-229-6383