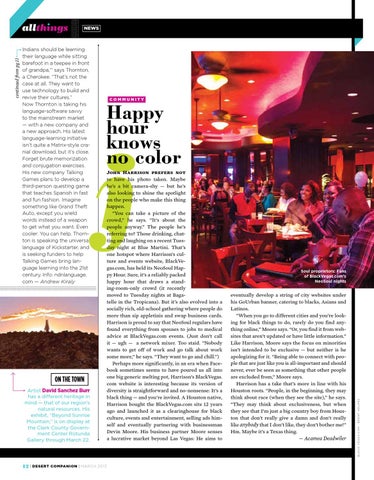 Indians should be learning their language while sitting barefoot in a teepee in front of grandpa,’” says Thornton, a Cherokee. “That’s not the case at all. They want to use technology to build and revive their cultures.” Now Thornton is taking his language-software savvy to the mainstream market — with a new company and a new approach. His latest language-learning initiative isn’t quite a Matrix-style cranial download, but it’s close. Forget brute memorization and conjugation exercises. His new company Talking Games plans to develop a third-person questing game that teaches Spanish in fast and fun fashion. Imagine something like Grand Theft Auto, except you wield words instead of a weapon to get what you want. Even cooler: You can help. Thornton is speaking the universal language of Kickstarter, and is seeking funders to help Talking Games bring language learning into the 21st century. Info: ndnlanguage. com — Andrew Kiraly

ON THE TOWN Artist David Sanchez Burr has a different heritage in mind — that of our region’s natural resources. His exhibit, “Beyond Sunrise Mountain,” is on display at the Clark County Government Center Rotunda Gallery through March 22.

John Harrison prefers not to have his photo taken. Maybe he’s a bit camera-shy — but he’s also looking to shine the spotlight on the people who make this thing happen. “You can take a picture of the crowd,” he says. “It’s about the people anyway.” The people he’s referring to? Those drinking, chatting and laughing on a recent Tuesday night at Blue Martini. That’s one hotspot where Harrison’s culture and events website, BlackVegas.com, has held its NeoSoul Happy Hour. Sure, it’s a reliably packed happy hour that draws a standing-room-only crowd (it recently moved to Tuesday nights at Bagatelle in the Tropicana). But it’s also evolved into a socially rich, old-school gathering where people do more than sip appletinis and swap business cards. Harrison is proud to say that NeoSoul regulars have found everything from spouses to jobs to medical advice at BlackVegas.com events. (Just don’t call it — ugh — a network mixer. Too staid. “Nobody wants to get off of work and go talk about work some more,” he says. “They want to go and chill.”) Perhaps more significantly, in an era when Facebook sometimes seems to have poured us all into one big generic melting pot, Harrison’s BlackVegas. com website is interesting because its version of diversity is straightforward and no-nonsense: It’s a black thing — and you’re invited. A Houston native, Harrison bought the BlackVegas.com site 12 years ago and launched it as a clearinghouse for black culture, events and entertainment, selling ads himself and eventually partnering with businessman Devin Moore. His business partner Moore senses a lucrative market beyond Las Vegas: He aims to

eventually develop a string of city websites under his GoUrban banner, catering to blacks, Asians and Latinos. “When you go to different cities and you’re looking for black things to do, rarely do you find anything online,” Moore says. “Or, you find it from websites that aren’t updated or have little information.” Like Harrison, Moore says the focus on minorities isn’t intended to be exclusive — but neither is he apologizing for it. “Being able to connect with people that are just like you is all-important and should never, ever be seen as something that other people are excluded from,” Moore says. Harrison has a take that’s more in line with his Houston roots. “People, in the beginning, they may think about race (when they see the site),” he says. “They may think about exclusiveness, but when they see that I’m just a big country boy from Houston that don’t really give a damn and don’t really like anybody that I don’t like, they don’t bother me!” Hm. Maybe it’s a Texas thing. — Acamea Deadwiler