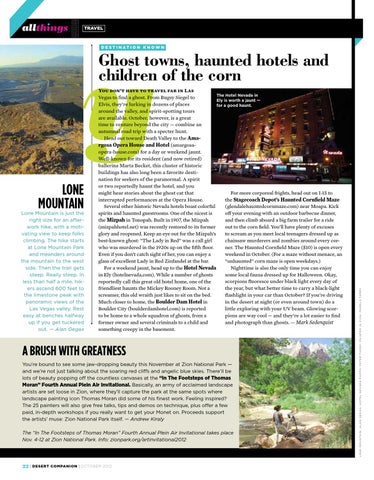 Lone Mountain is just the right size for an afterwork hike, with a motivating view to keep folks climbing. The hike starts at Lone Mountain Park and meanders around the mountain to the west side. Then the trail gets steep. Really steep. In less than half a mile, hikers ascend 600 feet to the limestone peak with panoramic views of the Las Vegas valley. Rest easy at benches halfway up if you get tuckered out. — Alan Gegax

You don’t have to travel far in Las The Hotel Nevada in Vegas to find a ghost. From Bugsy Siegel to Ely is worth a jaunt — Elvis, they’re lurking in dozens of places for a good haunt. around the valley, and spirit-spotting tours are available. October, however, is a great time to venture beyond the city — combine an autumnal road trip with a specter hunt. Head out toward Death Valley to the Amargosa Opera House and Hotel (amargosaopera-house.com) for a day or weekend jaunt. Well-known for its resident (and now retired) ballerina Marta Becket, this cluster of historic buildings has also long been a favorite destination for seekers of the paranormal. A spirit or two reportedly haunt the hotel, and you For more corporeal frights, head out on I-15 to might hear stories about the ghost cat that the Stagecoach Depot’s Haunted Cornfield Maze interrupted performances at the Opera House. (glendalehauntedcornmaze.com) near Moapa. Kick Several other historic Nevada hotels boast colorful off your evening with an outdoor barbecue dinner, spirits and haunted guestrooms. One of the nicest is and then climb aboard a big farm trailer for a ride the Mizpah in Tonopah. Built in 1907, the Mizpah out to the corn field. You’ll have plenty of excuses (mizpahhotel.net) was recently restored to its former to scream as you meet local teenagers dressed up as glory and reopened. Keep an eye out for the Mizpah’s chainsaw murderers and zombies around every corbest-known ghost: “The Lady in Red” was a call girl ner. The Haunted Cornfield Maze ($10) is open every who was murdered in the 1920s up on the fifth floor. weekend in October. (For a maze without menace, an Even if you don’t catch sight of her, you can enjoy a “unhaunted” corn maze is open weekdays.) glass of excellent Lady in Red Zinfandel at the bar. Nighttime is also the only time you can enjoy For a weekend jaunt, head up to the Hotel Nevada some local fauna dressed up for Halloween. Okay, in Ely (hotelnevada.com). While a number of ghosts scorpions fluoresce under black light every day of reportedly call this great old hotel home, one of the the year, but what better time to carry a black-light friendliest haunts the Mickey Rooney Room. Not a flashlight in your car than October? If you’re driving screamer, this old wraith just likes to sit on the bed. in the desert at night (or even around town) do a Much closer to home, the Boulder Dam Hotel in little exploring with your UV beam. Glowing scorBoulder City (boulderdamhotel.com) is reported pions are way cool — and they’re a lot easier to find to be home to a whole squadron of ghosts, from a and photograph than ghosts. — Mark Sedenquist former owner and several criminals to a child and something creepy in the basement.

Ghost towns, haunted hotels and children of the corn