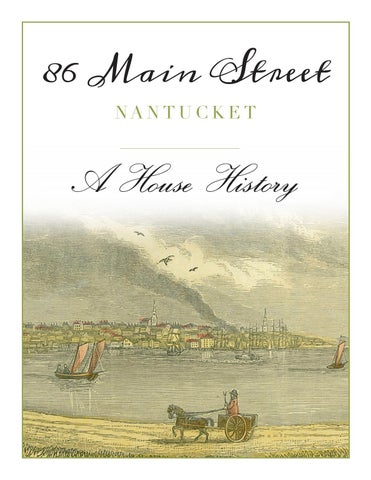 The house at 86 Main Street, referred to as “Revival-Eclectic” by architectural historian Clay Lancaster, has elements of Federal (end chimneys), Greek Revival (cupola, pilasters, doorway) and Gothic Revival (lancet window in pediment) styles of architecture. It also has a rich ownership history paralleling Nantucket’s whaling heydays. In May 1833, Captain Joseph Allen (1773–1856) purchased “a certain lot of land in said Nantucket with the building thereon standing…” from Edward Hussey (1794–1878), whose in-laws, Peregrine Folger (1754–1831) and Rachel Hussey (1760–1829), purchased a portion of the house from Peregrine’s father, Jonathan (1727–1812), in 1797. By October 9, 1833, Captain Allen had placed an advertisement in the Inquirer for an “Old House for Sale”: ​ o be sold at public auction on the premises, at 2 o’clock p.m. on the 17th ​of the present month, T if not previously disposed of, the house, late the p ​ roperty of Jonathan and Peregrine Folger, deceased; with all the Bricks ​and Stones thereto belonging, exclusive of the stones in the cellar. Also, a woodhouse belonging to the same. Both to be removed from the land by the 25th inst.…”

The William Coffin map of Nantucket, prepared in 1833 and published in 1834, shows this earlier dwelling and woodhouse at the corner of Main Street and Pine Street. In its place, Captain Allen built the present structure—a large house that the Allen family had occupied by late 1834 or early 1835.

Captain Joseph Allen was one of Nantucket’s most prominent mariners, serving as master of the ship Leo in 1798 at the age of twenty-five. Between 1798 and 1830, Allen captained seven ships on thirteen whaling voyages. As master of Maro in 1820, he brought the first American whaleship to the port of Honolulu, and in 1827, his voyage on the newly built ship Clarkson, which he later purchased with James Atkinson and Henry Defrieze, included his eleven-year-old grandson, Albert A. Gardner. Allen was married to Abigail Coffin (1775–1862), and their six children were grown by the time Allen built the house.

Captain Allen’s fortunes would soon change. In June 1835, he mortgaged the property “now occupied by me and my family” to the Nantucket Institution for Savings for three thousand five hundred dollars. The mortgage was signed by both Joseph and Abigail. It is likely that he ran into financial problems, perhaps during the Panic of 1837, and was forced to relinquish his right to the house. In December 1838, Ann Crosby (1818–1904), a single woman, purchased the property from Nantucket Institution for Savings for four thousand eight hundred seventy-four dollars. Curiously, a second deed for interest in the property from Abigail Allen to Crosby in consideration of $534 was recorded immediately following the first deed.

Ann’s mother, Lydia Coffin (1793–1823), who died when Ann was five years old, was Zenas Coffin’s daughter. Zenas, among the wealthiest whale-oil merchants in Massachusetts, appears to have left Ann a sizable inheritance, which she may have used to purchase the grand home. Ann’s father, Matthew Crosby (1791– 1878) was also a prosperous Nantucket merchant, owning most of the land and the tryworks between Pine Street and Traders Lane, including the property immediately to the south of 86 Main Street. When Ann Crosby purchased the Allen house in 1838, Main Street was one of the most prestigious addresses on Nantucket Island. Ann’s aunts and uncles lived at 75, 78, 91, and 99 Main Street, and her father and stepmother, who raised her, lived at 90 Main Street. It is likely that the house was purchased in preparation for her upcoming marriage and because Ann wanted to remain in her family’s neighborhood. Two months after the purchase of the property, Ann and George C. Macy (1814–1895) publicly announced their marriage intentions.

Ann Macy added to the property’s bounds in 1858, purchasing from her father a nearly seven-rod parcel on Pine Street, “free from the interference or control of her husband. . . .” The reference is not unique on island but suggests that Ann and George were part of the growing suffrage movement. The Macys added a rear addition to the house, and following a partition agreement with their neighbor, Lydia Coleman, Job Coleman’s widow, they added to their garden as well. ​ Although blessed with longevity, the Macys had no children, and in 1913, one of their heirs, Edward W. Gardner (1857–1932), Ann’s step-nephew, sold the property to Elizabeth F. Glenn for “one dollar and other valuable considerations.” Widowed in 1911, Elizabeth F. Glenn was from Cincinnati, Ohio, where her husband, James M. Glenn, had been associated with the family firm of William Glenn & Sons, wholesale grocers and realtors. He had first come to Nantucket in 1867, and Nantucket became their summer home. The November 1, 1913, Inquirer and Mirror announced the sale of the property, noting, “Mrs. Glenn has already started improvements.” Glenn’s tenure at the property was only six years. She sold the house along with “all the furniture, house-hold goods now contained in or upon the premises” to Albert M. Read of Pawtucket, Rhode Island. Read was an officer in the Crefeld Waste and Batting Company, and along with his wife and three children had begun spending summers in Nantucket in 1918. In 1946, Read sold the property to his daughter, Mary Elizabeth Matteson. The family would retain the house until 2004. In 2016, the Paduch family purchased the property and began a restoration of the 1834 house.

his brief history is an important contribution to the island’s architectural record. Documentation is one of the ways the Nantucket Preservation Trust celebrates the more than 2,400 historic homes, farms, and workplaces that contributed to the island’s designation as a National Historic Landmark in 1966. By providing owners of historic houses, island residents, schoolchildren, and visitors a broad spectrum of programs and projects, we encourage the preservation of irreplaceable structures, architectural features, and cultural landscapes. Lectures, walking tours, house markers, special events, and publications—including the house histories and neighborhood histories—de ne our unique work on Nantucket. We hope you enjoy the history of this house, its past owners, and its place in Nantucket’s remarkable architectural heritage.