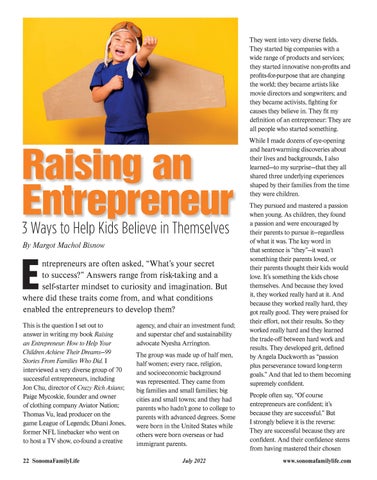 They went into very diverse fields. They started big companies with a wide range of products and services; they started innovative non-profits and profits-for-purpose that are changing the world; they became artists like movie directors and songwriters; and they became activists, fighting for causes they believe in. They fit my definition of an entrepreneur: They are all people who started something.

ntrepreneurs are often asked, “What’s your secret to success?” Answers range from risk-taking and a self-starter mindset to curiosity and imagination. But where did these traits come from, and what conditions enabled the entrepreneurs to develop them? This is the question I set out to answer in writing my book Raising an Entrepreneur: How to Help Your Children Achieve Their Dreams—99 Stories From Families Who Did. I interviewed a very diverse group of 70 successful entrepreneurs, including Jon Chu, director of Crazy Rich Asians; Paige Mycoskie, founder and owner of clothing company Aviator Nation; Thomas Vu, lead producer on the game League of Legends; Dhani Jones, former NFL linebacker who went on to host a TV show, co-found a creative 22 SonomaFamilyLife

agency, and chair an investment fund; and superstar chef and sustainability advocate Nyesha Arrington. The group was made up of half men, half women; every race, religion, and socioeconomic background was represented. They came from big families and small families; big cities and small towns; and they had parents who hadn’t gone to college to parents with advanced degrees. Some were born in the United States while others were born overseas or had immigrant parents. July 2022

While I made dozens of eye-opening and heart-warming discoveries about their lives and backgrounds, I also learned—to my surprise—that they all shared three underlying experiences shaped by their families from the time they were children. They pursued and mastered a passion when young. As children, they found a passion and were encouraged by their parents to pursue it—regardless of what it was. The key word in that sentence is “they”—it wasn’t something their parents loved, or their parents thought their kids would love. It’s something the kids chose themselves. And because they loved it, they worked really hard at it. And because they worked really hard, they got really good. They were praised for their effort, not their results. So they worked really hard and they learned the trade-off between hard work and results. They developed grit, defined by Angela Duckworth as “passion plus perseverance toward long-term goals.” And that led to them becoming supremely confident. People often say, “Of course entrepreneurs are confident; it’s because they are successful.” But I strongly believe it is the reverse: They are successful because they are confident. And their confidence stems from having mastered their chosen www.sonomafamilylife.com