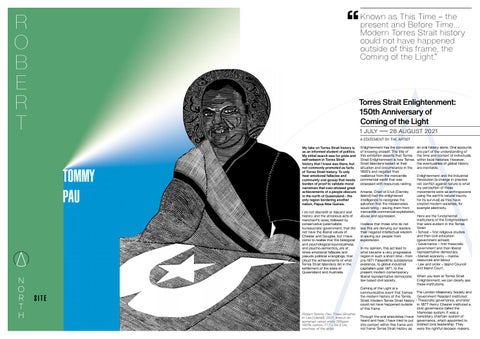 Known as This Time – the present and Before Time... Modern Torres Strait history could not have happened outside of this frame, the Coming of the Light.”

Torres Strait Enlightenment: 150th Anniversary of Coming of the Light 1 JULY —— 28 AUGUST 2021 A STATEMENT BY THE ARTIST

My take on Torres Strait history is as an informed student of politics. My initial search was for pride and self-esteem in Torres Strait history that I knew was there, but not commonly promoted as facts of Torres Strait history. To only hear emotional fallacies and community oral gossip that needs burden of proof to validate moral narratives that over-showed great achievements of a people obscure in the north of Queensland - the only region bordering another nation, Papua New Guinea. I do not discredit or discard oral history and the atrocious acts of merchant’s vices, followed by conservative paternalistic bureaucratic government, that did not have the liberal values of Chester and Douglas, but I have come to realise that the biological and psychological equivocalness and psycho-semantics, are at times emotional fallacies and pseudo political wranglings, that cloud the achievements of what Torres Strait Islanders did in the settlement of the state of Queensland and Australia.

Enlightenment has the connotation of knowing oneself. The title of this exhibition asserts that Torres Strait Enlightenment is how Torres Strait Islanders looked at their situation and circumstance in the 1800’s and negated their resilience from the mercantile commercial world that was obsessed with resources raiding.

an oral history alone. Oral accounts are part of the understanding of the time and context of individuals within local histories. However, the eventualities of global history are inevitable. Enlightenment and the Industrial Revolution (a change in practice not conflict against nature is what my perception of these movements were as anthropocene using the earth’s natural bounty for its survival) as they have created modern societies, for example electricity.

Amanie, Chief of Erub (Darnley Island) had the enlightened intelligence to recognise the salvation that the missionaries would bring – saving them from mercantile commercial exploitation, Here are the fundamental abuse and oppression. institutions of the Enlightenment that were evident in the Torres I believe that those who do not Strait: see this are denying our leaders their negated intellectual wisdom • School – first religious studies and then civil education in saving our people from (government school) exploitation. • Governance – first theocratic government and then liberal In my opinion, this act lead to representative democracy what became a very progressive region in such a short time - from • Market economy – marine pre-1871 Palaeolithic subsistence resources and labour • Law and order – Island Council existence, to global industrial and Island Court. capitalism post 1871, to the present modern contemporary liberal representative democratic When you look at Torres Strait Enlightenment, we can clearly see law based civil society. these institutions. Coming of the Light is a communicative event that frames The London Missionary Society and Government Resident instituted: the modern history of the Torres Strait. Modern Torres Strait history • Theocratic governance, and later could not have happened outside in 1877 Henry Chester instituted a civic governance called the of this frame. Mamoose system. It was a Through the oral anecdotes I have hereditary chieftain system of heard and hear, I have tried to put governance, which appointed to into context within this frame and indirect civic leadership. They not frame Torres Strait history as were the rightful decision makers.

• A democratic model came into being in 1937 due to the 1936 Maritime Strike. • The London Missionary Society setup schools which were followed by government-run schools. • The Reverend Fred Walker created an innovated entrepreneurial enterprise in the late 1800s and floated a company in 1904, where Islanders could and did own Pearl Luggers to participate in the lucrative global pearl shell market and other mariculture. This is the birth of Papua Industry Limited, now IBIS, a 117-year-old company built through the labour of Torres Strait Islanders and Cape York Aboriginal people who worked in the mariculture industry. • John Douglas, who succeeded Chester, instituted the Island Court in 1879 giving judicial decision making power for civic cases enforced by a police force, the Island Police, setup by Chester. While the magisterial power was invested in the government representative on each island, they were there to endorse the Island Court’s decisions. These are traits of a constructive modern liberal society and democracy that Islanders clearly embraced and participated wholehearted in and directly

contributed to the progressive history of the Torres Strait.

This form is not new but progressively industrial. Traditional societies have these forms but they exist in different epistemologies.

To wish it never happened is a fantasy of an alternative reality that may never eventuate, except for total destruction of the modern world.

Take schooling for example. Traditional schooling is about real world living with necessary subsistence knowledge for survival in one’s environment. Western schooling adds abstract concepts mainly for global trade and a market economy. Traditional systems had and have mathematics but never used it as abstract teaching methods.

To argue that it is not supposed to have happened the way it did disregards every explorers that stepped out into what was unknown to them and consolidate technologies that we all enjoy in the present.

The Coming of the Light has been or has had a religious overtone and celebrated as such. This exhibition is reflective of the enlightenment proactive engagement of Islanders, missionaries and the people who championed the region’s potential. Pragmatic social justice and reconciliation terms such as: Assimilation. Integration. Franchise. Capitalism. Liberalism. Progressivism. Law and order, Self determination, Autonomy, Indigenous government and governance (both theocratic and civic). Civility. Labour. Education. These terms are features of the

To insist that past system supersedes the present is ignorance of modern Human Rights, imposing its ideals into historical context that simply does not fit. Human Rights did not exist in the past and we cannot judge the past by modern day Human Rights. This exhibition is my responsibility for Torres Strait Islanders’ history. I have burdened myself to lay before Queensland, Australia and the world, the efforts of a people who number less than 60 000 in the 2016 Census, contribution to the State of Queensland and the nation, Australia. This is what the Coming of the Light is to Torres Strait Islanders, it is Torres Strait Enlightenment. 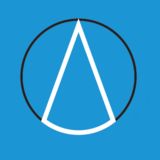