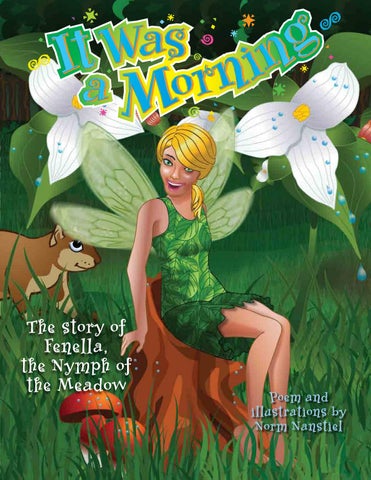 Morning Iast beautiful, was a morning, as promising as any other.

Dew drops sparkling as though they spoke in beams to one another. The larks and swifts were singing praise to this dayâ&#x20AC;&#x2122;s promise. The sleeping mist swirled from the brook with dancing, joyous. All that was left of nightâ&#x20AC;&#x2122;s dark cloak were stretching shadows. And now the sun with colors bright did paint the meadows. Then from the edge of Deep Dark Forest came a yawning. Light as a vapor, a secret whispered to the dawning.

Comes to the Meadow

Fenella B eneath the petals of trillium

that trimmed the paddock. From a web that a spider spun for her hammock. Awoke Fenella, nymph of meadows, her slight limbs stretching. Her large eyes blinking, she smiled to welcome this bright morning. No bigger than a butterfly, bright as a sunbeam. Like gossamer, she moved elusive, as if in a dream. Quick as a thought she swept the meadow with buzzing wings. Kissed all the flowers, gleefully greeted every bird that sings.

shot from the bow of whim, she did fly.

There up in the ether fair she hung while listening as the morning sung.

With love, surveyed leagues of forest green. Thrilled as though it was the first sheâ&#x20AC;&#x2122;d seen.

This was her favorite time of day to be, high above the land. The world was fresh and sunlight gleamed its life-willing demand.

Too thick it seemed for foggy wisps that melt into the sky. Then a flicker of crimson light flared at its base to stir her fright. Her beating heart stopped at the sight. She harshly gasped; “That’s Fire Light!” Her eyes darted to grasp the plan; how the flowing winds would fan. This writhing monster would grow in span to rake the forest from this fair land.

She shrieked in horror.

“This will not be!” She screamed with fervor.

Fenella D own she darted to spread the word; terror at Deep Dark Forest’s border. O’er the meadow Fenella sung to summon birds and every one. “Fire is coming from Valley Far! Tell all Forest Friends to run!” “Bring the beavers to River’s Bend; our Deep Dark Forest to defend.” “We all must fight this burning bane and bring this horror to its end.”

Forest Friends “toTswell ell every streamlet and rush; all the ponds to overflow and gush!” “Send all water to River’s Bend for beaver’s dam to fill and flush.”

All the fauna, great and small, heeded fair Fenella’s call.

Though foul hot breath of burning fire brought thoughts of terror to inspire.

Fenella’s resolve quelled all their fear. Her planned defense rang loud and clear.

They each must bear their duty to fight, to rid their forest of this foul plight.

T he Beavers rushed to River’s Bend; busily gnawing at trees to send

floating to build a growing jam of trunks and branches end on end. Fenella flew high to the eagles aerie dizzying heights for this meadow fairy. There to entreat the eagle’s aid to cluster clouds with rain to carry. Eagle’s keen eye saw the danger too, then leaped into the sky of blue. Off swift to soar his bold purview; clouds’ silver vapors to subdue.

observed the fervor of her Forest Friends. Her love for each in thought she’d send as to their tasks they did attend. All knowing that death did advance with blazing swords that they must chance. They must defend Deep Dark Forest. For life — they all would make this stance. Fenella said “I must now warn the hills around to flee this swarm.”

Fenella Warns O ff she flew then into the wafting

smoke, now drifting from the firestorm. Telling every creature wandering to “Flee toward River’s Bend!” Deer and squirrel, rabbit and quail; “Hurry to help this fire to end!” Flitting wildly through smoke and ash; searching for some friend in need. Hot winds grew wild and flames grew wilder but she pushed on without a heed.

Mother Wren Sa frantic he thought she heard call as she passed by a mighty oak.

The cries led her to Mother Wren with two fledglings engulfed in smoke. “Follow me” she said. “We’ll carry them both. Away! — Away to my green meadow!” Then off they flew in heavy flight with precious charges through building billow.

That they may save these helpless chicks to live the life that should be theirs.

On they pressed through fury and fume, hot winds searing at their small forms.

Clutching fledglings with limbs weary through the nightmare thick and bleary.

They Reach M other Wren flew beside Fenella, dodging burning ash and branch.

Till finally they reached the meadow; respite from the fireâ&#x20AC;&#x2122;s advance. Exhausted from their fiery flight, panting heavy in this lighter air. Heaving lifeâ&#x20AC;&#x2122;s breath, spent by wills deed, safely cradled; they all lay there.

the Safty of the Meadow

Eagles T hen through the smoke, dropped rain refreshing; sweet as honey, as pure as love.

Fenella lifted her eyes to heaven to witness this gift from above. Way high up in the sky now graying a thousand eagles herded clouds. Gathering heavy, moisture laden, sweeping sheets of raining shrouds. Glee swelled within Fenellaâ&#x20AC;&#x2122;s heart as heavenly hosts joined in the throng of Forest Friends to quell the menace from this land where they belong.

All the streams now spilling widely, to rend the flamedjuggernaut a rift. The churning, burning, hissing monster marched up to the waters edge. There it stopped — could go no further — as the wet rain poured on its head. It was shrinking moaning, spitting; searching for a path to rise. But the soaking land and rainfall soon spelled out the fire’s demise.

The Fire I and t hissed its last ceased its scheming;

Its blackened path of death was steaming.

All that was left now was a horrid scar scratched from the pond to Valley Far.

Cheers and tears of joy were pledged in this small, brave valley at forestâ&#x20AC;&#x2122;s edge.

These Forest Friends had stopped the fury with hearty little hearts of glory.

The Threat is Over, R efreshed, Fenella fluttered skyward and with a merry dance did spread

her thanks in love to all the creatures that saved the forest from this dread. Then the beavers breached the dam walls to release all the waters held. The eagles dispersed the cloud swell to let the sun rays warm the veld.

Fenella Thanks them All

Forest Friends T he sun did shine its evening beams through a rainbow high in the sky.

The Forest Friends there gazed in silence at this wonder that gleamed on high. This moment would be set forever in their hearts with love and pride. They had saved their Deep Dark Forest; home and haven, where they reside. Time would come for celebration, for thanks and praises to extol. With lightened hearts and heavy bodies now exhaustion must take its toll.

as Fenella lay down to rest.

The Forest Friends were sleeping soundly; they earned this slumber with their best. The whippoorwill now chanting lonely; counting time through this night long. A rising moon, with mute light glowing, soothing all it shined upon. At meadowâ&#x20AC;&#x2122;s edge Fenella rested with thanks and love within her heart. They saved the meadow; They saved the forest she was happy to do her part.

can bring fate to its bended knee. Will – will have its bidding answered. Not by size but by degree. Fighting bravely with a whisper far outcries the lion’s roar.

Glory wrought of love is passage from gates of fear to heaven’s door. The night was healing, the soft breeze cleansing. The world turned to bring the day. With the morning came celebration. Time for feasting and time to play.

Morning Comes Ain the ll would gather meadow. It was such a glorious sight.

All sang praises to brave Fenella for her guidance through their plight. Fenella blushed; her light shining would flood the meadow in glowing pink. The Forest Friends broke out in laughter and gave each other a knowing wink. Love and laughter filled the forest on that morning blessed with wonder. It was a morning; more beautiful, more promising than any other.

The seasons pass in Deep Dark Forest From golden leaves to winter’s snow. Though all seems still ‘neath winter’s cloak and meadow’s grass is lying fallow. Fenella keeps a loving vigil o’er her meadow and Forest Friends. She waits for Spring to reawaken the sleeping flora as life ascends. Earth’s patient rhythm and healing magic will bring the valley to life once more. There’ll come a morning the sun will rise more beautiful than ever before. 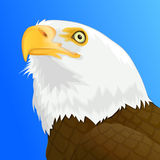 It Was a Morning

"It Was A Morning" The story of Fenella, the Nymph of the Meadow. Poem and illustrations by Norm Nanstiel

It Was a Morning

"It Was A Morning" The story of Fenella, the Nymph of the Meadow. Poem and illustrations by Norm Nanstiel