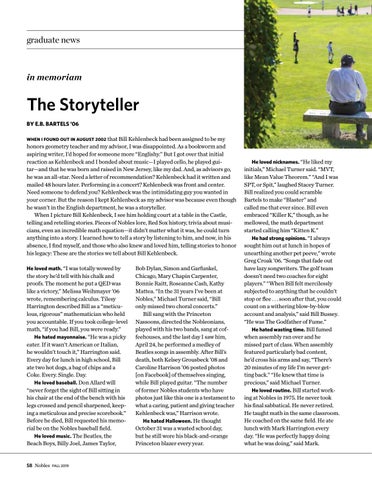 The Storyteller BY E.B. BARTELS ’06 WHEN I FOUND OUT IN AUGUST 2002 that Bill Kehlenbeck had been assigned to be my honors geometry teacher and my advisor, I was disappointed. As a bookworm and aspiring writer, I’d hoped for someone more “Englishy.” But I got over that initial reaction as Kehlenbeck and I bonded about music—I played cello, he played guitar—and that he was born and raised in New Jersey, like my dad. And, as advisors go, he was an all-star. Need a letter of recommendation? Kehlenbeck had it written and mailed 48 hours later. Performing in a concert? Kehlenbeck was front and center. Need someone to defend you? Kehlenbeck was the intimidating guy you wanted in your corner. But the reason I kept Kehlenbeck as my advisor was because even though he wasn’t in the English department, he was a storyteller. When I picture Bill Kehlenbeck, I see him holding court at a table in the Castle, telling and retelling stories. Pieces of Nobles lore, Red Sox history, trivia about musicians, even an incredible math equation—it didn’t matter what it was, he could turn anything into a story. I learned how to tell a story by listening to him, and now, in his absence, I find myself, and those who also knew and loved him, telling stories to honor his legacy: These are the stories we tell about Bill Kehlenbeck.

He loved math. “I was totally wowed by the story he’d tell with his chalk and proofs. The moment he put a QED was like a victory,” Melissa Weihmayer ’06 wrote, remembering calculus. Tilesy Harrington described Bill as a “meticulous, rigorous” mathematician who held you accountable. If you took college-level math, “if you had Bill, you were ready.” He hated mayonnaise. “He was a picky eater. If it wasn’t American or Italian, he wouldn’t touch it,” Harrington said. Every day for lunch in high school, Bill ate two hot dogs, a bag of chips and a Coke. Every. Single. Day. He loved baseball. Don Allard will “never forget the sight of Bill sitting in his chair at the end of the bench with his legs crossed and pencil sharpened, keeping a meticulous and precise scorebook.” Before he died, Bill requested his memorial be on the Nobles baseball field. He loved music. The Beatles, the Beach Boys, Billy Joel, James Taylor,

Bob Dylan, Simon and Garfunkel, Chicago, Mary Chapin Carpenter, Bonnie Raitt, Roseanne Cash, Kathy Mattea. “In the 31 years I’ve been at Nobles,” Michael Turner said, “Bill only missed two choral concerts.” Bill sang with the Princeton Nassoons, directed the Nobleonians, played with his two bands, sang at coffeehouses, and the last day I saw him, April 24, he performed a medley of Beatles songs in assembly. After Bill’s death, both Kelsey Grousbeck ’08 and Caroline Harrison ’06 posted photos [on Facebook] of themselves singing, while Bill played guitar. “The number of former Nobles students who have photos just like this one is a testament to what a caring, patient and giving teacher Kehlenbeck was,” Harrison wrote. He hated Halloween. He thought October 31 was a wasted school day, but he still wore his black-and-orange Princeton blazer every year.

He loved nicknames. “He liked my initials,” Michael Turner said. “MVT, like Mean Value Theorem.” “And I was SPT, or Spit,” laughed Stacey Turner. Bill realized you could scramble Bartels to make “Blaster” and called me that ever since. Bill even embraced “Killer K,” though, as he mellowed, the math department started calling him “Kitten K.” He had strong opinions. “I always sought him out at lunch in hopes of unearthing another pet peeve,” wrote Greg Croak ’06. “Songs that fade out have lazy songwriters. The golf team doesn’t need two coaches for eight players.” “When Bill felt mercilessly subjected to anything that he couldn’t stop or flee . . . soon after that, you could count on a withering blow-by-blow account and analysis,” said Bill Bussey. “He was The Godfather of Fume.” He hated wasting time. Bill fumed when assembly ran over and he missed part of class. When assembly featured particularly bad content, he’d cross his arms and say, “There’s 20 minutes of my life I’m never getting back.” “He knew that time is precious,” said Michael Turner. He loved routine. Bill started working at Nobles in 1975. He never took his final sabbatical. He never retired. He taught math in the same classroom. He coached on the same field. He ate lunch with Mark Harrington every day. “He was perfectly happy doing what he was doing,” said Mark.

The fall 2019 issue of Nobles magazine features four different covers of Class I students plus the annual graduation insert with Class I profiles. Inside you can read about grads in the news and happenings on campus, goodbyes to our retiring faculty members, a conversation about finding treasure with the Wellesley Picker Stephanie Savage Flynn '01, how Jon Olinto '94 is revitalizing wheat at One Mighty Mill, some of the best advice our students and staff have ever received, graduate notes and much more. 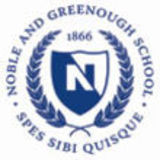