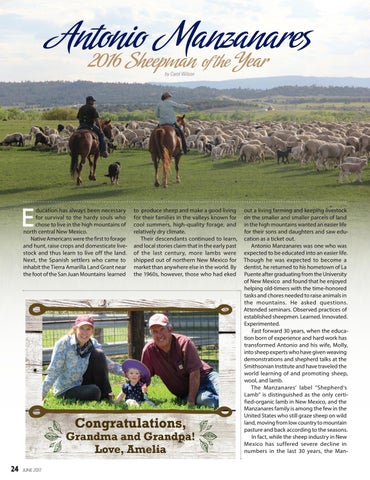 Antonio Manzanares 2016 Sheepman of the Year by Carol Wilson

ducation has always been necessary for survival to the hardy souls who chose to live in the high mountains of north central New Mexico. Native Americans were the first to forage and hunt, raise crops and domesticate livestock and thus learn to live off the land. Next, the Spanish settlers who came to inhabit the Tierra Amarilla Land Grant near the foot of the San Juan Mountains learned

to produce sheep and make a good living for their families in the valleys known for cool summers, high-quality forage, and relatively dry climate. Their descendants continued to learn, and local stories claim that in the early past of the last century, more lambs were shipped out of northern New Mexico for market than anywhere else in the world. By the 1960s, however, those who had eked

out a living farming and keeping livestock on the smaller and smaller parcels of land in the high mountains wanted an easier life for their sons and daughters and saw education as a ticket out. Antonio Manzanares was one who was expected to be educated into an easier life. Though he was expected to become a dentist, he returned to his hometown of La Puente after graduating from the University of New Mexico and found that he enjoyed helping old-timers with the time-honored tasks and chores needed to raise animals in the mountains. He asked questions. Attended seminars. Observed practices of established sheepmen. Learned. Innovated. Experimented. Fast forward 30 years, when the education born of experience and hard work has transformed Antonio and his wife, Molly, into sheep experts who have given weaving demonstrations and shepherd talks at the Smithsonian Institute and have traveled the world learning of and promoting sheep, wool, and lamb. The Manzanares’ label “Shepherd’s Lamb” is distinguished as the only certified-organic lamb in New Mexico, and the Manzanares family is among the few in the United States who still graze sheep on wild land, moving from low country to mountain pasture and back according to the seasons. In fact, while the sheep industry in New Mexico has suffered severe decline in numbers in the last 30 years, the Man-

The Magazine for Southwestern Agriculture 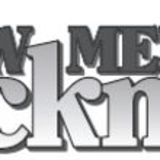