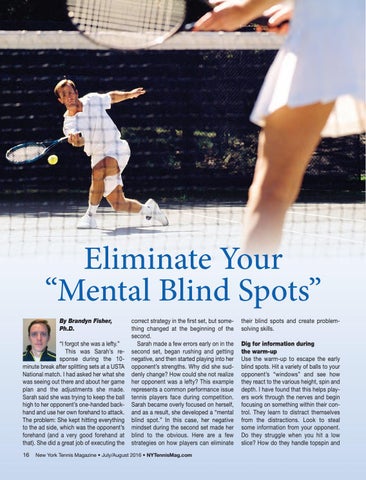 Eliminate Your “Mental Blind Spots” By Brandyn Fisher, Ph.D. “I forgot she was a lefty.” This was Sarah’s response during the 10minute break after splitting sets at a USTA National match. I had asked her what she was seeing out there and about her game plan and the adjustments she made. Sarah said she was trying to keep the ball high to her opponent’s one-handed backhand and use her own forehand to attack. The problem: She kept hitting everything to the ad side, which was the opponent’s forehand (and a very good forehand at that). She did a great job of executing the 16

correct strategy in the first set, but something changed at the beginning of the second. Sarah made a few errors early on in the second set, began rushing and getting negative, and then started playing into her opponent’s strengths. Why did she suddenly change? How could she not realize her opponent was a lefty? This example represents a common performance issue tennis players face during competition. Sarah became overly focused on herself, and as a result, she developed a “mental blind spot.” In this case, her negative mindset during the second set made her blind to the obvious. Here are a few strategies on how players can eliminate

their blind spots and create problemsolving skills. Dig for information during the warm-up Use the warm-up to escape the early blind spots. Hit a variety of balls to your opponent’s “windows” and see how they react to the various height, spin and depth. I have found that this helps players work through the nerves and begin focusing on something within their control. They learn to distract themselves from the distractions. Look to steal some information from your opponent. Do they struggle when you hit a low slice? How do they handle topspin and 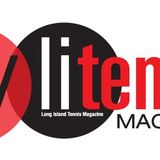