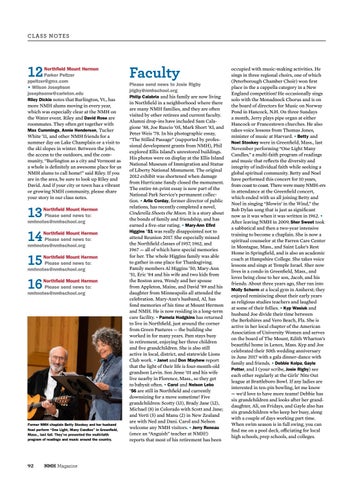 Northfield Mount Hermon Parker Peltzer ppeltzer@gmx.com • Wilson Josephson josephsonw@carleton.edu Riley Dickie notes that Burlington, Vt., has more NMH alums moving in every year, which was especially clear at the NMH on the Water event. Riley and David Rose are roommates. They often get together with Max Cummings, Annie Henderson, Tucker White ’11, and other NMH friends for a summer day on Lake Champlain or a visit to the ski slopes in winter. Between the jobs, the access to the outdoors, and the community, “Burlington as a city and Vermont as a whole is definitely an awesome place for us NMH alums to call home!” said Riley. If you are in the area, be sure to look up Riley and David. And if your city or town has a vibrant or growing NMH community, please share your story in our class notes.

Former NMH chaplain Betty Stookey and her husband Noel perform “One Light, Many Candles” in Greenfield, Mass., last fall. They’ve presented the multi-faith program of readings and music around the country.

Please send news to Josie Rigby jrigby@nmhschool.org Philip Calabria and his family are now living in Northfield in a neighborhood where there are many NMH families, and they are often visited by other retirees and current faculty. Alumni drop-ins have included Sam Calagione ’88, Joe Ruscio ’05, Mark Short ’83, and Peter Weis ’78. In his photographic essay, “The Stilled Passage” (supported by professional development grants from NMH), Phil explored Ellis Island’s unrestored buildings. His photos were on display at the Ellis Island National Museum of Immigration and Statue of Liberty National Monument. The original 2012 exhibit was shortened when damage from Hurricane Sandy closed the monument. The entire 66-print essay is now part of the National Park Service’s permanent collection. • Arlie Corday, former director of public relations, has recently completed a novel, Cinderella Shoots the Moon. It is a story about the bonds of family and friendship, and has earned a five-star rating. • Mary-Ann Efird Higgins ’51 was really disappointed not to attend Reunion 2017. She especially missed the Northfield classes of 1957, 1962, and 1967 — all of which have special memories for her. The whole Higgins family was able to gather in one place for Thanksgiving. Family members Al Higgins ’50, Mary-Ann ’51, Eric ’84 and his wife and two kids from the Boston area, Wendy and her spouse from Appleton, Maine, and David ’89 and his daughter from Minneapolis all attended the celebration. Mary-Ann’s husband, Al, has fond memories of his time at Mount Hermon and NMH. He is now residing in a long-term care facility. • Pamela Hodgkins has returned to live in Northfield, just around the corner from Green Pastures — the building she worked in for many years. Pam stays busy in retirement, enjoying her three children and five grandchildren. She is also still active in local, district, and statewide Lions Club work. • Janet and Don Mayhew report that the light of their life is four-month-old grandson Levin. Son Jesse ’01 and his wife live nearby in Florence, Mass., so they get to babysit often. • Carol and Nelson Lebo ’56 are still in Northfield and currently downsizing for a move sometime! Five grandchildren: Scotty (13), Brady Jane (12), Michael (8) in Colorado with Scott and Jane; and Verti (5) and Manu (2) in New Zealand are with Ned and Dani. Carol and Nelson welcome any NMH visitors. • Jerry Reneau (once an “Anguish” teacher at NMH!) reports that most of his retirement has been

occupied with music-making activities. He sings in three regional choirs, one of which (Peterborough Chamber Choir) won first place in the a cappella category in a New England competition! He occasionally sings solo with the Monadnock Chorus and is on the board of directors for Music on Norway Pond in Hancock, N.H. On three Sundays a month, Jerry plays pipe organ at either Hancock or Francestown churches. He also takes voice lessons from Thomas Jones, minister of music at Harvard. • Betty and Noel Stookey were in Greenfield, Mass., last November performing “One Light Many Candles,” a multi-faith program of readings and music that reflects the diversity and integrity of individual faith while seeking a global spiritual community. Betty and Noel have performed this concert for 10 years, from coast to coast. There were many NMH-ers in attendance at the Greenfield concert, which ended with us all joining Betty and Noel in singing “Blowin’ in the Wind,” the Bob Dylan song that is just as significant now as it was when it was written in 1962. • After leaving NMH in 2009, Sher Sweet took a sabbatical and then a two-year intensive training to become a chaplain. She is now a spiritual counselor at the Farren Care Center in Montague, Mass., and Saint Luke’s Rest Home in Springfield, and is also an academic coach at Hampshire College. She takes voice lessons and sings at Temple Israel. Sher now lives in a condo in Greenfield, Mass., and loves being close to her son, Jacob, and his friends. About three years ago, Sher ran into Molly Scherm at a local gym in Amherst; they enjoyed reminiscing about their early years as religious studies teachers and laughed at some of their follies. • Kyp Wasiuk and husband Joe divide their time between the Berkshires and Vero Beach, Fla. She is active in her local chapter of the American Association of University Women and serves on the board of The Mount, Edith Wharton’s beautiful home in Lenox, Mass. Kyp and Joe celebrated their 50th wedding anniversary in June 2017 with a gala dinner-dance with family and friends. • Debbie Kolpa, Gayle Potter, and I (your scribe, Josie Rigby) see each other regularly at the Girls’ Nite Out league at Brattleboro Bowl. If any ladies are interested in ten-pin bowling, let me know — we’d love to have more teams! Debbie has six grandchildren and looks after her granddaughter, Ali, on Fridays, and Gayle also has six grandchildren who keep her busy, along with a couple of days working part time. When swim season is in full swing, you can find me on a pool deck, officiating for local high schools, prep schools, and colleges.