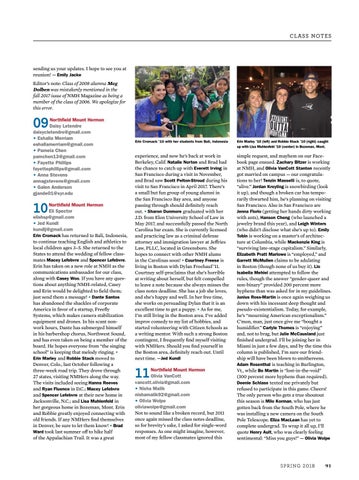 sending us your updates. I hope to see you at reunion! — Emily Jacke Editor’s note: Class of 2008 alumna Meg Dolben was mistakenly mentioned in the fall 2017 issue of NMH Magazine as being a member of the class of 2006. We apologize for this error.

Northfield Mount Hermon Eli Spector elishsp@gmail.com • Jed Kundl kundlj@gmail.com Erin Cromack has returned to Bali, Indonesia, to continue teaching English and athletics to local children ages 3–5. She returned to the States to attend the wedding of fellow classmates Macey Lefebvre and Spencer Lefebvre. Erin has taken on a new role at NMH as the communications ambassador for our class, along with Casey Woo. If you have any questions about anything NMH-related, Casey and Erin would be delighted to field them; just send them a message! • Dante Santos has abandoned the shackles of corporate America in favor of a startup, Freefly Systems, which makes camera stabilization equipment and drones. In his scant nonwork hours, Dante has submerged himself in his barbershop chorus, Northwest Sound, and has even taken on being a member of the board. He hopes everyone from “the singing school” is keeping that melody ringing. • Erin Marley and Robbie Stack moved to Denver, Colo., last October following a three-week road trip. They drove through 27 states, visiting NMHers along the way. The visits included seeing Hanna Reeves and Ryan Fluence in D.C.; Macey Lefebvre and Spencer Lefebvre at their new home in Jacksonville, N.C.; and Lisa Muhlenfeld in her gorgeous home in Bozeman, Mont. Erin and Robbie greatly enjoyed connecting with old friends. If any NMHers find themselves in Denver, be sure to let them know! • Brad Ward took last summer off to hike half of the Appalachian Trail. It was a great

Erin Cromack ’10 with her students from Bali, Indonesia

experience, and now he’s back at work in Berkeley, Calif. Natalie Norton and Brad had the chance to catch up with Everett Irving in San Francisco during a visit in November, and Brad saw Scott Pelton-Stroud during his visit to San Francisco in April 2017. There’s a small but fun group of young alumni in the San Francisco Bay area, and anyone passing through should definitely reach out. • Sharon Dunmore graduated with her J.D. from Elon University School of Law in May 2017, and successfully passed the North Carolina bar exam. She is currently licensed and practicing law as a criminal defense attorney and immigration lawyer at Jeffries Law, PLLC, located in Greensboro. She hopes to connect with other NMH alums in the Carolinas soon! • Courtney Freese is living in Boston with Dylan Freehauf ’11. Courtney self-proclaims that she’s horrible at writing about herself, but felt compelled to leave a note because she always misses the class notes deadline. She has a job she loves, and she’s happy and well. In her free time, she works on persuading Dylan that it is an excellent time to get a puppy. • As for me, I’m still living in the Boston area. I’ve added improv comedy to my list of hobbies, and started volunteering with Citizen Schools as a writing mentor. With such a strong Boston contingent, I frequently find myself visiting with NMHers. Should you find yourself in the Boston area, definitely reach out. Until next time. —Jed Kundl

simple request, and mayhem on our Facebook page ensued. Zachary Bitzer is working at NMH, and Olivia VanCott Stanton recently got married on campus — our congratulations to her! Tenzin Masselli is, to quote, “alive.” Jordan Kreyling is snowbirding (look it up), and though a broken car has temporarily thwarted him, he’s planning on visiting San Francisco. Also in San Francisco are Jenna Florio (getting her hands dirty working with ants), Hanson Cheng (who launched a jewelry brand this year), and Leigh Winters (who didn’t disclose what she’s up to). Emily Tobin is working on a master’s of architecture at Columbia, while Mackenzie King is “surviving late-stage capitalism.” Similarly, Elizabeth Pratt Marlowe is “employed,” and Garrett McMullen claims to be adulating in Boston (though none of us buy it). Lio Isabella Mehiel attempted to follow the rules, though the answer “gender-queer and non-binary” provided 200 percent more hyphens than was asked for in my guidelines. Junius Ross-Martin is once again weighing us down with his incessant deep thought and pseudo-existentialism. Today, for example, he’s “mourning American exceptionalism.” C’mon, man, just once give me “bought a humidifier.” Carlyle Thomes is “enjoying” and, not to brag, but Julie McCausland just finished undergrad. I’ll be joining her in Miami in just a few days, and by the time this column is published, I’m sure our friendship will have been blown to smithereens. Adam Rosenthal is teaching in Burlington, Vt., while Bo Martin is “lost-in-the-void” (300 percent more hyphens than required). Deenie Schlass texted me privately but refused to participate in this game. Cheers! The only person who gets a true shoutout this season is Milo Korman, who has just gotten back from the South Pole, where he was installing a new camera on the South Pole Telescope. Eliza MacLean has yet to complete undergrad. To wrap it all up, I’ll quote Henry Ault, who was clearly feeling sentimental: “Miss you guys!” — Olivia Wolpe

Northfield Mount Hermon Olivia VanCott vancott.olivia@gmail.com • Nisha Malik nishamalik92@gmail.com • Olivia Wolpe oliviawolpe@gmail.com Not to sound like a broken record, but 2011 once again missed the class notes deadline, so for brevity’s sake, I asked for single-word responses. As one might imagine, however, most of my fellow classmates ignored this