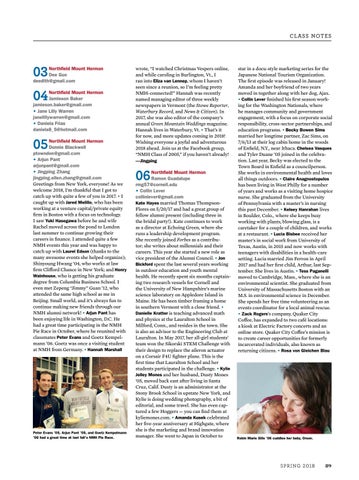 Northfield Mount Hermon Donnie Blackwell ptowndon@gmail.com • Arjun Pant arjunpant@gmail.com • Jingping Zhang jingping.ellen.zhang@gmail.com Greetings from New York, everyone! As we welcome 2018, I’m thankful that I got to catch up with quite a few of you in 2017. • I caught up with Jared Melillo, who has been working at a venture capital/private equity firm in Boston with a focus on technology. I saw Yuki Hasegawa before he and wife Rachel moved across the pond to London last summer to continue growing their careers in finance. I attended quite a few NMH events this year and was happy to catch up with Laurel Edson (thanks to the many awesome events she helped organize); Shinyoung Hwang ’04, who works at law firm Clifford Chance in New York; and Henry Wainhouse, who is getting his graduate degree from Columbia Business School. I even met Zepeng “Jimmy” Guan ’12, who attended the same high school as me in Beijing. Small world, and it’s always fun to continue making new friends through our NMH alumni network! • Arjun Pant has been enjoying life in Washington, D.C. He had a great time participating in the NMH Pie Race in October, where he reunited with classmates Peter Evans and Goetz Kempelmann ’06. Goetz was once a visiting student at NMH from Germany. • Hannah Marshall

wrote, “I watched Christmas Vespers online, and while caroling in Burlington, Vt., I ran into Eliza van Lennep, whom I haven’t seen since a reunion, so I’m feeling pretty NMH-connected!” Hannah was recently named managing editor of three weekly newspapers in Vermont (the Stowe Reporter, Waterbury Record, and News &amp; Citizen). In 2017, she was also editor of the company’s annual Green Mountain Weddings magazine. Hannah lives in Waterbury, Vt. • That’s it for now, and more updates coming in 2018! Wishing everyone a joyful and adventurous 2018 ahead. Join us at the Facebook group, “NMH Class of 2005,” if you haven’t already! —Jingping

Northfield Mount Hermon Ramon Guadalupe rmg57@cornell.edu • Collin Lever collinlever@gmail.com Kate Hayes married Thomas ThompsonFlores on 5/20/17 and had a great group of fellow alumni present (including three in the bridal party!). Kate continues to work as a director at Echoing Green, where she runs a leadership development program. She recently joined Forbes as a contributor; she writes about millennials and their careers. This year she started a new role as vice president of the Alumni Council. • Jon Bickford spent the last several years working in outdoor education and youth mental health. He recently spent six months captaining two research vessels for Cornell and the University of New Hampshire’s marine science laboratory on Appledore Island in Maine. He has been timber framing a home in southern Vermont with a close friend. • Danielle Kratter is teaching advanced math and physics at the Lauralton School in Milford, Conn., and resides in the town. She is also an advisor to the Engineering Club at Lauralton. In May 2017, her all-girl students’ team won the Sikorski STEM Challenge with their design to replace the aileron actuator on a Corsair F4U fighter plane. This is the first time that Lauralton School and her students participated in the challenge. • Kylie Jelley Mones and her husband, Dusty Mones ’05, moved back east after living in Santa Cruz, Calif. Dusty is an administrator at the Stony Brook School in upstate New York, and Kylie is doing wedding photography, a bit of editorial, and some travel. She has even captured a few Hoggers — you can find them at kyliemones.com. • Amanda Kusek celebrated her five-year anniversary at Highgate, where she is the marketing and brand innovation manager. She went to Japan in October to

star in a docu-style marketing series for the Japanese National Tourism Organization. The first episode was released in January! Amanda and her boyfriend of two years moved in together along with her dog, Ajax. • Collin Lever finished his first season working for the Washington Nationals, where he manages community and government engagement, with a focus on corporate social responsibility, cross-sector partnerships, and education programs. • Becky Bowen Sims married her longtime partner, Zac Sims, on 7/6/13 at their log cabin home in the woods of Enfield, N.Y., near Ithaca. Chelsea Vasques and Tyler Duane ’05 joined in the celebration. Last year, Becky was elected to the Town Board in Enfield as a councilperson. She works in environmental health and loves all things outdoors. • Claire Anagnostopulos has been living in West Philly for a number of years and works as a visiting home hospice nurse. She graduated from the University of Pennsylvania with a master’s in nursing this past December. • Kelsey Hanrahan lives in Boulder, Colo., where she keeps busy working with plants, blowing glass, is a caretaker for a couple of children, and works at a restaurant. • Lucia Bisbee received her master’s in social work from University of Texas, Austin, in 2015 and now works with teenagers with disabilities in a health-care setting. Lucia married Jim Ferron in April 2017 and had her first child, Arthur, last September. She lives in Austin. • Tess Paganelli moved to Cambridge, Mass., where she is an environmental scientist. She graduated from University of Massachusetts Boston with an M.S. in environmental science in December. She spends her free time volunteering as an events coordinator for a local animal rescue. • Zack Rogers’s company, Quaker City Coffee, has expanded to two café locations: a kiosk at Electric Factory concerts and an online store. Quaker City Coffee’s mission is to create career opportunities for formerly incarcerated individuals, also known as returning citizens. • Rosa von Gleichen Blau