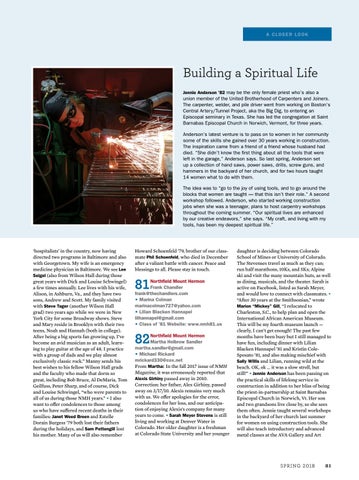 union member of the United Brotherhood of Carpenters and Joiners. The carpenter, welder, and pile driver went from working on Boston’s Central Artery/Tunnel Project, aka the Big Dig, to entering an Episcopal seminary in Texas. She has led the congregation at Saint Barnabas Episcopal Church in Norwich, Vermont, for three years. Anderson’s latest venture is to pass on to women in her community some of the skills she gained over 30 years working in construction. The inspiration came from a friend of a friend whose husband had died. “She didn’t know the first thing about all the tools that were left in the garage,” Anderson says. So last spring, Anderson set up a collection of hand saws, power saws, drills, screw guns, and hammers in the backyard of her church, and for two hours taught 14 women what to do with them. The idea was to “go to the joy of using tools, and to go around the blocks that women are taught — that this isn’t their role.” A second workshop followed. Anderson, who started working construction jobs when she was a teenager, plans to host carpentry workshops throughout the coming summer. “Our spiritual lives are enhanced by our creative endeavors,” she says. “My craft, and living with my tools, has been my deepest spiritual life.”

‘hospitalists’ in the country, now having directed two programs in Baltimore and also with Georgetown. My wife is an emergency medicine physician in Baltimore. We see Lee Seigel (also from Wilson Hall during those great years with Dick and Louise Schwingel) a few times annually. Lee lives with his wife, Alison, in Ashburn, Va., and they have two sons, Andrew and Scott. My family visited with Steve Tager (another Wilson Hall grad) two years ago while we were in New York City for some Broadway shows. Steve and Mary reside in Brooklyn with their two teens, Noah and Hannah (both in college). After being a big sports fan growing up, I’ve become an avid musician as an adult, learning to play guitar at the age of 48. I practice with a group of dads and we play almost exclusively classic rock.” Manny sends his best wishes to his fellow Wilson Hall grads and the faculty who made that dorm so great, including Bob Bruce, Al DeMaria, Tom Geilfuss, Peter Sharp, and of course, Dick and Louise Schwingel, “who were parents to all of us during those NMH years.” • I also want to offer condolences to those among us who have suffered recent deaths in their families: Janet Weed Breen and Estelle Dorain Burgess ’79 both lost their fathers during the holidays, and Sam Pettengill lost his mother. Many of us will also remember

Howard Schoenfeld ’79, brother of our classmate Phil Schoenfeld, who died in December after a valiant battle with cancer. Peace and blessings to all. Please stay in touch.

Northfield Mount Hermon Martha Holbrow Sandler martha.sandler@gmail.com • Michael Rickard mrickard330@cox.net From Martha: In the fall 2017 issue of NMH Magazine, it was erroneously reported that Alexis Girhiny passed away in 2010. Correction: her father, Alex Girhiny, passed away on 3/17/10. Alexis remains very much with us. We offer apologies for the error, condolences for her loss, and our anticipation of enjoying Alexis’s company for many years to come. • Sarah Meyer Stevens is still living and working at Denver Water in Colorado. Her older daughter is a freshman at Colorado State University and her younger

daughter is deciding between Colorado School of Mines or University of Colorado. The Stevenses travel as much as they can; run half marathons, 10Ks, and 5Ks; Alpine ski and visit the many mountain huts, as well as dining, musicals, and the theater. Sarah is active on Facebook, listed as Sarah Meyer, and would love to connect with classmates. • “After 30 years at the Smithsonian,” wrote Marion “Mickey” Gill, “I relocated to Charleston, S.C., to help plan and open the International African American Museum. This will be my fourth museum launch — clearly, I can’t get enough! The past few months have been busy but I still managed to have fun, including dinner with Lilian Blacken Hannapel ’81 and Kristin ColeSposato ’81, and also making mischief with Sally Willis and Lilian, running wild at the beach. OK, ok ... it was a slow stroll, but still!” • Jennie Anderson has been passing on the practical skills of lifelong service in construction in addition to her bliss of being the priest-in-partnership at Saint Barnabas Episcopal Church in Norwich, Vt. Her son and two grandsons live close by, so she sees them often. Jennie taught several workshops in the backyard of her church last summer for women on using construction tools. She will also teach introductory and advanced metal classes at the AVA Gallery and Art