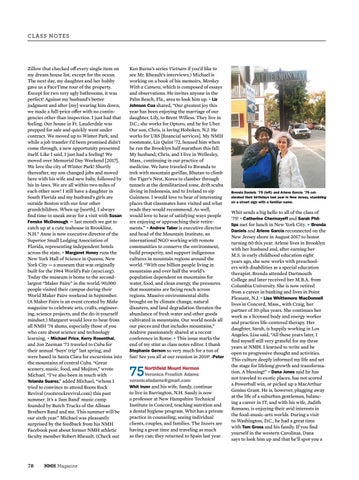 Zillow that checked off every single item on my dream house list, except for the ocean. The next day, my daughter and her hubby gave us a FaceTime tour of the property. Except for two very ugly bathrooms, it was perfect! Against my husband’s better judgment and after [my] wearing him down, we made a full-price offer with no contingencies other than inspection. I just had that feeling. Our house in Ft. Lauderdale was prepped for sale and quickly went under contract. We moved up to Winter Park, and while a job transfer I’d been promised didn’t come through, a new opportunity presented itself. Like I said, I just had a feeling! We moved over Memorial Day Weekend [2017]. We love the city of Winter Park! Shortly thereafter, my son changed jobs and moved here with his wife and new baby, followed by his in-laws. We are all within two miles of each other now! I still have a daughter in South Florida and my husband’s girls are outside Boston with our four other grandchildren. When up [north], I always find time to sneak away for a visit with Susan Fenske McDonough — last month we got to catch up at a cute teahouse in Brookline, N.H.” Anne is now executive director of the Superior Small Lodging Association of Florida, representing independent hotels across the state. • Margaret Honey runs the New York Hall of Science in Queens, New York City — a museum that was originally built for the 1964 World’s Fair (nysci.org). Today the museum is home to the secondlargest “Maker Faire” in the world; 90,000 people visited their campus during their World Maker Faire weekend in September. (A Maker Faire is an event created by Make magazine to celebrate arts, crafts, engineering, science projects, and the do-it-yourself mindset.) Margaret would love to hear from all NMH ’74 alums, especially those of you who care about science and technology learning. • Michael Price, Kerry Rosenthal, and Jon Zeeman ’73 traveled to Cuba for their annual “boys’ trip” last spring, and were based in Santa Clara for excursions into the mountains of central Cuba. “Great scenery, music, food, and Mojitos,” wrote Michael. “I’ve also been in touch with Yolanda Suarez,” added Michael, “whom I tried to convince to attend Roots Rock Revival (rootsrockrevival.com) this past summer. It’s a ‘Jam Band’ music camp founded by Butch Trucks of the Allman Brothers Band and me. This summer will be our sixth year.” Michael was pleasantly surprised by the feedback from his NMH Facebook post about former NMH athletic faculty member Robert Rheault. (Check out

Ken Burns’s series Vietnam if you’d like to see Mr. Rheault’s interviews.) Michael is working on a book of his memoirs, Monkey With a Camera, which is composed of essays and observations. He invites anyone in the Palm Beach, Fla., area to look him up. • Liz Johnson Cua shared, “Our greatest joy this year has been enjoying the marriage of our daughter, Lily, to Brent Willess. They live in D.C.; she works for Optoro, and he for Uber. Our son, Chris, is loving Hoboken, N.J. He works for UBS [financial services]. My NMH roommate, Liz Quint ’72, housed him when he ran the Brooklyn half marathon this fall. My husband, Chris, and I live in Wellesley, Mass., continuing in our practice of medicine. We have traveled to Rwanda to trek with mountain gorillas, Bhutan to climb the Tiger’s Nest, Korea to clamber through tunnels at the demilitarized zone, drift scuba diving in Indonesia, and to Ireland to sip Guinness. I would love to hear of interesting places that classmates have visited and what reads they would recommend. As well, would love to hear of satisfying ways people are enjoying or approaching their retirements.” • Andrew Taber is executive director and head of the Mountain Institute, an international NGO working with remote communities to conserve the environment, build prosperity, and support indigenous cultures in mountain regions around the world. “With one billion people living in mountains and over half the world’s population dependent on mountains for water, food, and clean energy, the pressures that mountains are facing reach across regions. Massive environmental shifts brought on by climate change, natural disasters, and land degradation threaten the abundance of fresh water and other goods cultivated in mountains. Our world needs all our pieces and that includes mountains,” Andrew passionately shared at a recent conference in Rome. • This issue marks the end of my stint as class notes editor. I thank Stephanie Gerson so very much for a ton of fun! See you all at our reunion in 2019! -Peter

Northfield Mount Hermon Veronica Froelich Adams veronicafadams@gmail.com Whit Inzer and his wife, Sandy, continue to live in Barrington, N.H. Sandy is now a professor at New Hampshire Technical Institute in Concord, teaching nutrition and a dental hygiene program. Whit has a private practice in counseling, seeing individual clients, couples, and families. The Inzers are having a great time and traveling as much as they can; they returned to Spain last year.

Brenda Daniels ’75 (left) and Arlene Garcia ’75 celebrated their birthdays last year in New Jersey, stumbling on a street sign with a familiar name.

Whit sends a big hello to all of the class of ’75! • Catherine Chermayeff and Sarah Phillips met for lunch in New York City. • Brenda Daniels and Arlene Garcia reconnected on the New Jersey shore in August 2017 to honor turning 60 this year. Arlene lives in Brooklyn with her husband and, after earning her M.S. in early childhood education eight years ago, she now works with preschoolers with disabilities as a special education therapist. Brenda attended Dartmouth College and later received her M.B.A. from Columbia University. She is now retired from a career in banking and lives in Point Pleasant, N.J. • Lisa Whittemore MacDonnell lives in Concord, Mass., with Craig, her partner of 30-plus years. She continues her work as a licensed body and energy worker and practices life-centered therapy. Her daughter, Sarah, is happily working in Los Angeles. Lisa said, “All these years later, I find myself still very grateful for my three years at NMH. I learned to write and be open to progressive thought and activities. This culture deeply informed my life and set the stage for lifelong growth and transformation. A blessing!” • Dana Jones said he has not traveled to exotic places, has not scored a Powerball win, or picked up a MacArthur Genius Grant. He is, however, plugging away at the life of a suburban gentleman, balancing a career in IT, and with his wife, Judith Romano, is enjoying their avid interests in the food-music-arts worlds. During a visit to Washington, D.C., he had a great time with Tom Gross and his family. If you find yourself in the western Carolinas, Dana says to look him up and that he’ll spot you a