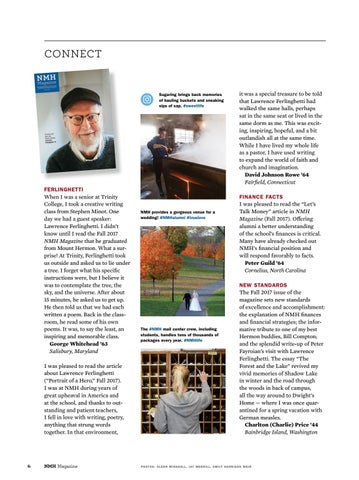 Sugaring brings back memories of hauling buckets and sneaking sips of sap. #sweetlife

FERLINGHETTI When I was a senior at Trinity College, I took a creative writing class from Stephen Minot. One day we had a guest speaker: Lawrence Ferlinghetti. I didn’t know until I read the Fall 2017 NMH Magazine that he graduated from Mount Hermon. What a surprise! At Trinity, Ferlinghetti took us outside and asked us to lie under a tree. I forget what his specific instructions were, but I believe it was to contemplate the tree, the sky, and the universe. After about 15 minutes, he asked us to get up. He then told us that we had each written a poem. Back in the classroom, he read some of his own poems. It was, to say the least, an inspiring and memorable class. George Whitehead ’63 Salisbury, Maryland

I was pleased to read the article about Lawrence Ferlinghetti (“Portrait of a Hero,” Fall 2017). I was at NMH during years of great upheaval in America and at the school, and thanks to outstanding and patient teachers, I fell in love with writing, poetry, anything that strung words together. In that environment,

NMH provides a gorgeous venue for a wedding! #NMHalumni #truelove

The #NMH mail center crew, including students, handles tens of thousands of packages every year. #NMHlife

it was a special treasure to be told that Lawrence Ferlinghetti had walked the same halls, perhaps sat in the same seat or lived in the same dorm as me. This was exciting, inspiring, hopeful, and a bit outlandish all at the same time. While I have lived my whole life as a pastor, I have used writing to expand the world of faith and church and imagination. David Johnson Rowe ’64 Fairfield, Connecticut FINANCE FACTS I was pleased to read the “Let’s Talk Money” article in NMH Magazine (Fall 2017). Offering alumni a better understanding of the school’s finances is critical. Many have already checked out NMH’s financial position and will respond favorably to facts. Peter Guild ’64 Cornelius, North Carolina NEW STANDARDS The Fall 2017 issue of the magazine sets new standards of excellence and accomplishment: the explanation of NMH finances and financial strategies; the informative tribute to one of my best Hermon buddies, Bill Compton; and the splendid write-up of Peter Fayroian’s visit with Lawrence Ferlinghetti. The essay “The Forest and the Lake” revived my vivid memories of Shadow Lake in winter and the road through the woods in back of campus, all the way around to Dwight’s Home — where I was once quarantined for a spring vacation with German measles. Charlton (Charlie) Price ’44 Bainbridge Island, Washington