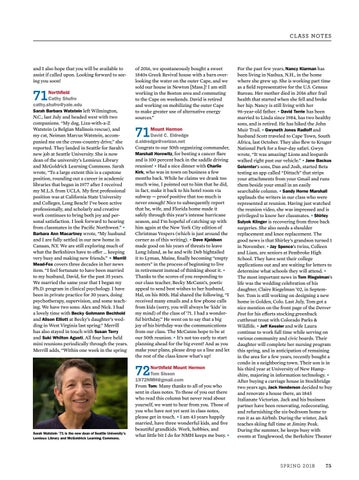 and I also hope that you will be available to assist if called upon. Looking forward to seeing you soon!

N.C., last July and headed west with two companions. “My dog, Liza-with-a-Z Watstein (a Belgian Malinois rescue), and my cat, Neiman Marcus Watstein, accompanied me on the cross-country drive,” she reported. They landed in Seattle for Sarah’s new job at Seattle University. She is now dean of the university’s Lemieux Library and McGoldrick Learning Commons. Sarah wrote, “To a large extent this is a capstone position, rounding out a career in academic libraries that began in 1977 after I received my M.L.S. from UCLA. My first professional position was at California State University and Colleges, Long Beach! I’ve been active professionally, and scholarly and creative work continues to bring both joy and personal satisfaction. I look forward to hearing from classmates in the Pacific Northwest.” • Barbara Ann Macartney wrote, “My husband and I are fully settled in our new home in Canaan, N.Y. We are still exploring much of what the Berkshires have to offer … keeping very busy and making new friends.” • Merrill Mead-Fox covers three decades in her news item. “I feel fortunate to have been married to my husband, David, for the past 35 years. We married the same year that I began my Ph.D. program in clinical psychology. I have been in private practice for 30 years, doing psychotherapy, supervision, and some teaching. We have two sons: Alex and Nick. I had a lovely time with Becky Gohmann Bechhold and Alison Elliott at Becky’s daughter’s wedding in West Virginia last spring.” Merrill has also stayed in touch with Susan Terry and Suki Whilton Agusti. All four have held mini reunions periodically through the years. Merrill adds, “Within one week in the spring

of 2016, we spontaneously bought a sweet 1840s Greek Revival house with a barn overlooking the water on the outer Cape, and we sold our house in Newton [Mass.]! I am still working in the Boston area and commuting to the Cape on weekends. David is retired and working on mobilizing the outer Cape to make greater use of alternative energy sources.”

Mount Hermon David C. Eldredge d.eldredge@verizon.net Congrats to our 50th organizing commander, Marshall Horowitz, for besting a cancer flare and is 100 percent back in the saddle driving reunion! • Had a nice dinner with Charlie Kirk, who was in town on business a few months back. While he claims we drank too much wine, I pointed out to him that he did, in fact, make it back to his hotel room via subway — proof positive that too much is never enough! Nice to subsequently report that he, wife, and Florida home made it safely through this year’s intense hurricane season, and I’m hopeful of catching up with him again at the New York City edition of Christmas Vespers (which is just around the corner as of this writing). • Dave Kjeldsen made good on his years of threats to leave Long Island, as he and wife Deb hightailed it to Lyman, Maine, finally becoming “empty nesters” in the process of beginning to live in retirement instead of thinking about it. • Thanks to the scores of you responding to our class teacher, Becky McCann’s, poetic appeal to send best wishes to her husband, Hal, on his 80th. Hal shared the following, “I received many emails and a few phone calls from kids (sorry, you will always be ‘kids’ in my mind) of the class of ’71. I had a wonderful birthday.” He went on to say that a big joy of his birthday was the communications from our class. The McCanns hope to be at our 50th reunion. • It’s not too early to start planning ahead for the big event! And as you make your plans, please drop us a line and let the rest of the class know what’s up!

Northfield Mount Hermon Tom Sisson 1972NMH@gmail.com From Tom: Many thanks to all of you who sent in class notes. To those of you out there who read this column but never read about yourself, we want to hear from you. Those of you who have not yet sent in class notes, please get in touch. • I am 43 years happily married, have three wonderful kids, and five beautiful grandkids. Work, hobbies, and what little bit I do for NMH keeps me busy. •

For the past few years, Nancy Klarman has been living in Nashua, N.H., in the home where she grew up. She is working part time as a field representative for the U.S. Census Bureau. Her mother died in 2016 after frail health that started when she fell and broke her hip. Nancy is still living with her 96-year-old father. • David Terrie has been married to Linda since 1984, has two healthy sons, and is retired. He has hiked the John Muir Trail. • Gwyneth Jones Radloff and husband Scott traveled to Cape Town, South Africa, last October. They also flew to Kruger National Park for a four-day safari. Gwyn wrote, “It was amazing! Lions and leopards walked right past our vehicle.” • Jane Backus Gelernter’s sons, Dan and Josh, started Beta testing an app called “Dittach” that strips your attachments from your Gmail and runs them beside your email in an easily searchable column. • Sandy Horne Marshall applauds the writers in our class who were represented at reunion. Having just watched the reunion video, she was impressed and is privileged to know her classmates. • Shirley Sulyok Klinger is recovering from three back surgeries. She also needs a shoulder replacement and knee replacement. The good news is that Shirley’s grandson turned 1 in November. • Jay Spence’s twins, Colleen and Liam, are seniors at Pembroke High School. They have sent their college applications out and are waiting for letters to determine what schools they will attend. • The most important news in Tom Riegelman’s life was the wedding celebration of his daughter, Claire Riegelman ’02, in September. Tom is still working on designing a new home in Golden, Colo. Last July, Tom got a nice mention on the front page of the Denver Post for his efforts stocking greenback cutthroat trout with Colorado Parks &amp; Wildlife. • Jeff Kessler and wife Laura continue to work full time while serving on various community and civic boards. Their daughter will complete her nursing program this spring, and in anticipation of remaining in the area for a few years, recently bought a condo in a neighboring town. Their son is in his third year at University of New Hampshire, majoring in information technology. • After buying a carriage house in Stockbridge two years ago, Jack Henderson decided to buy and renovate a house there, an 1845 Italianate Victorian. Jack and his business partner have been renovating, redecorating, and refurnishing the six-bedroom home to run it as an Airbnb. During the winter, Jack teaches skiing full time at Jiminy Peak. During the summer, he keeps busy with events at Tanglewood, the Berkshire Theater