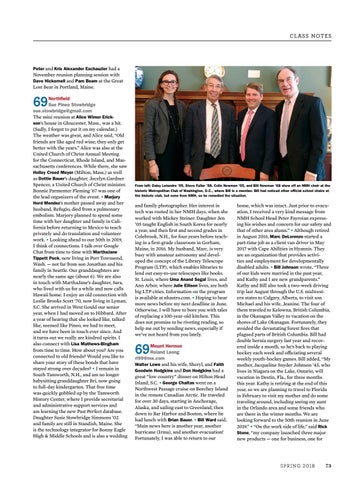 Peter and Kris Alexander Eschauzier had a

Dave Hickernell and Pam Beam at the Great

Northfield Sue Pineo Stowbridge sue.stowbridge@gmail.com The mini reunion at Alice Wimer Erickson’s house in Gloucester, Mass., was a hit. (Sadly, I forgot to put it on my calendar.) The weather was great, and Alice said, “Old friends are like aged red wine; they only get better with the years.” Alice was also at the United Church of Christ Annual Meeting for the Connecticut, Rhode Island, and Massachusetts conferences. While there, she saw Holley Creed Meyer (Milton, Mass.) as well as Dottie Bauer’s daughter, Jocelyn Gardner Spencer, a United Church of Christ minister. Bonnie Parmenter Fleming ’67 was one of the lead organizers of the event. • Marjory Hord Mendez’s mother passed away and her husband, Refugio, died from a pulmonary embolism. Marjory planned to spend some time with her daughter and family in California before returning to Mexico to teach privately and do translation and volunteer work. • Looking ahead to our 50th in 2019, I think of connections. I talk over Google Chat from time to time with MarthaJane Tippett Peck, now living in Port Townsend, Wash. — not far from son Jonathan and his family in Seattle. Our granddaughters are nearly the same age (about 6). We are also in touch with MarthaJane’s daughter, Sara, who lived with us for a while and now calls Hawaii home. I enjoy an old connection with Leslie Brooks Scott ’70, now living in Lyman, S.C. She arrived in West Gould our senior year, when I had moved on to Hibbard. After a year of hearing that she looked like, talked like, seemed like Pineo, we had to meet, and we have been in touch ever since. And it turns out we really are kindred spirits. I also connect with Lisa Mathews-Bingham from time to time. How about you? Are you connected to old friends? Would you like to share your story of these bonds that have stayed strong over decades? • I remain in South Tamworth, N.H., and am no longer babysitting granddaughter Bri, now going to full-day kindergarten. That free time was quickly gobbled up by the Tamworth History Center, where I provide secretarial and administrative support services and am learning the new Past Perfect database. Daughter Susie Stowbridge Simmons ’02 and family are still in Standish, Maine. She is the technology integrator for Bonny Eagle High &amp; Middle Schools and is also a wedding

From left: Daisy Letendre ’09, Steve Fuller ’58, Colin Newman ’05, and Bill Newman ’68 show off an NMH chair at the historic Metropolitan Club of Washington, D.C., where Bill is a member. Bill had noticed other official school chairs at the historic club, but none from NMH, so he remedied the situation.

and family photographer. Her interest in tech was rooted in her NMH days, when she worked with Mickey Steiner. Daughter Jen ’05 taught English in South Korea for nearly a year, and then first and second grades in Colebrook, N.H., for four years before teaching in a first-grade classroom in Gorham, Maine, in 2016. My husband, Marc, is very busy with amateur astronomy and developed the concept of the Library Telescope Program (LTP), which enables libraries to lend out easy-to-use telescopes like books. St. Louis, where Uma Anand Segal lives, and Ann Arbor, where Julie Ellison lives, are both big LTP cities. Information on the program is available at nhastro.com. • Hoping to hear more news before my next deadline in June. Otherwise, I will have to bore you with tales of replacing a 100-year-old kitchen. This does not promise to be riveting reading, so help me out by sending news, especially if we’ve not heard from you lately.

Mount Hermon Roland Leong rl99@me.com Walter Lowe and his wife, Sheryl, and Faith Goodwin Hodgkins and Don Hodgkins had a great “low country” dinner on Hilton Head Island, S.C. • George Chaltas went on a Northwest Passage cruise on Beechey Island in the remote Canadian Arctic. He traveled for over 30 days, starting in Anchorage, Alaska, and sailing east to Greenland, then down to Bar Harbor and Boston, where he had lunch with Brian Bauer. • Bill Ward said, “Main news here is another year, another hurricane (Irma), and another evacuation! Fortunately, I was able to return to our

home, which was intact. Just prior to evacuation, I received a very kind message from NMH School Head Peter Fayroian expressing his wishes and concern for our safety and that of other area alums.” • Although retired in August 2016, Marc DeLorenzo started a part-time job as a client van driver in May 2017 with Cape Abilities in Hyannis. They are an organization that provides activities and employment for developmentally disabled adults. • Bill Johnson wrote, “Three of our kids were married in the past year, and Kathy and I are new grandparents.” Kathy and Bill also took a two-week driving trip last August through the U.S. midwestern states to Calgary, Alberta, to visit son Michael and his wife, Jeanine. The four of them traveled to Kelowna, British Columbia, in the Okanagan Valley to vacation on the shores of Lake Okanagan. Fortunately, they avoided the devastating forest fires that plagued parts of British Columbia. Bill had double hernia surgery last year and recovered inside a month, so he’s back to playing hockey each week and officiating several weekly youth-hockey games. Bill added, “My mother, Jacqueline Snyder Johnson ’45, who lives in Niagara on the Lake, Ontario, will vacation in Destin, Fla., for three months this year. Kathy is retiring at the end of this year, so we are planning to travel to Florida in February to visit my mother and do some traveling around, including seeing my aunt in the Orlando area and some friends who are there in the winter months. We are looking forward to the 50th reunion in June 2019.” • “On the work side of life,” said Rick Stone, “my company launched three major new products — one for business, one for