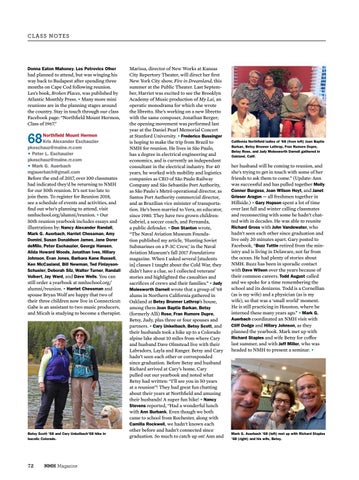 had planned to attend, but was winging his way back to Budapest after spending three months on Cape Cod following reunion. Les’s book, Broken Places, was published by Atlantic Monthly Press. • Many more mini reunions are in the planning stages around the country. Stay in touch through our class Facebook page: “Northfield Mount Hermon, Class of 1967.”

Marissa, director of New Works at Kansas City Repertory Theater, will direct her first New York City show, Fire in Dreamland, this summer at the Public Theater. Last September, Harriet was excited to see the Brooklyn Academy of Music production of My Lai, an operatic monodrama for which she wrote the libretto. She’s working on a new libretto with the same composer, Jonathan Berger; the opening movement was performed last year at the Daniel Pearl Memorial Concert at Stanford University. • Frederico Bussinger is hoping to make the trip from Brazil to NMH for reunion. He lives in São Paulo, has a degree in electrical engineering and economics, and is currently an independent consultant in the electrical industry. For 40 years, he worked with mobility and logistics companies as CEO of São Paulo Railway Company and São Sebastião Port Authority, as São Paulo´s Metrô operational director, as Santos Port Authority commercial director, and as Brazilian vice minister of transportation. He’s been married to Vera, an educator, since 1980. They have two grown children: Gabriel, a soccer coach, and Fernanda, a public defender. • Don Stanton wrote, “The Naval Aviation Museum Foundation published my article, ‘Hunting Soviet Submarines on a P-3C Crew,’ in the Naval Aviation Museum’s fall 2017 Foundations magazine. When I asked several [students in] classes I taught about the Cold War, they didn’t have a clue, so I collected veterans’ stories and highlighted the casualties and sacrifices of crews and their families.” • Judy Molesworth Darnell wrote that a group of ’68 alums in Northern California gathered in Oakland at Betsy Brunner Lathrop’s house, among them Joan Baptie Barkan, Betsy (formerly Alli) Rose, Fran Rumore Dupre, Betsy, Judy, plus three or four spouses and partners. • Cary Unkelbach, Betsy Scott, and their husbands took a hike up to a Colorado alpine lake about 10 miles from where Cary and husband Dave Olmstead live with their Labradors, Layla and Ranger. Betsy and Cary hadn’t seen each other or corresponded since graduation. Before Betsy and husband Richard arrived at Cary’s home, Cary pulled out our yearbook and noted what Betsy had written: “I’ll see you in 50 years at a reunion”! They had great fun chatting about their years at Northfield and amusing their husbands! A super fun hike! • Nancy Stevens reported, “Had a wonderful lunch with Ann Burbank. Even though we both came to school from Rochester, along with Camilla Rockwell, we hadn’t known each other before and hadn’t connected since graduation. So much to catch up on! Ann and

her husband will be coming to reunion, and she’s trying to get in touch with some of her friends to ask them to come.” (Update: Ann was successful and has pulled together Molly Conner Burgess, Joan Wilson Hoyt, and Janet Grieser Aragon — all freshmen together in Hillside.) • Gary Hopson spent a lot of time over last fall and winter calling classmates and reconnecting with some he hadn’t chatted with in decades. He was able to reunite Richard Gross with John Vandewater, who hadn’t seen each other since graduation and live only 20 minutes apart. Gary posted to Facebook, “Buzz Tuttle retired from the ministry and is living in Delaware, not far from the ocean. He had plenty of stories about NMH. Buzz has been in sporadic contact with Dave Wilson over the years because of their common careers. Todd August called and we spoke for a time remembering the school and its denizens. Todd is a Cornellian (as is my wife) and a physician (as is my wife), so that was a ‘small world’ moment. He is still practicing in Houston, where he interned these many years ago.” • Mark G. Auerbach coordinated an NMH visit with Cliff Dodge and Hillary Johnson, as they planned the yearbook. Mark met up with Richard Staples and wife Betsy for coffee last summer, and with Jeff Miller, who was headed to NMH to present a seminar. •