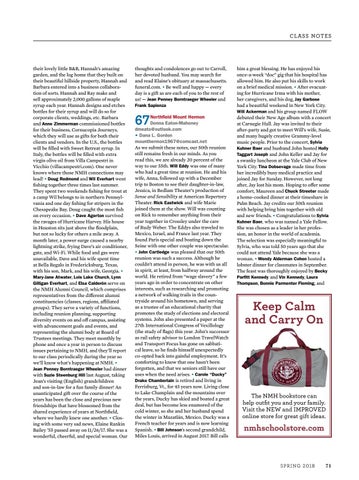 their lovely little B&amp;B, Hannah’s amazing garden, and the log home that they built on their beautiful hillside property, Hannah and Barbara entered into a business collaboration of sorts. Hannah and Ray make and sell approximately 2,000 gallons of maple syrup each year. Hannah designs and etches bottles for their syrup and will do so for corporate clients, weddings, etc. Barbara and Anne Zimmerman commissioned bottles for their business, Cornucopia Journeys, which they will use as gifts for both their clients and vendors. In the U.S., the bottles will be filled with Sweet Retreat syrup. In Italy, the bottles will be filled with extra virgin olive oil from Villa Campestri in Vicchio (villacampestri.com). One never knows where those NMH connections may lead! • Doug Redmond and Wil Everhart went fishing together three times last summer. They spent two weekends fishing for trout at a camp Wil belongs to in northern Pennsylvania and one day fishing for stripers in the Chesapeake Bay. Doug caught the most fish on every occasion. • Dave Agerton survived the ravages of Hurricane Harvey. His house in Houston sits just above the floodplain, but not so lucky for others a mile away. A month later, a power surge caused a nearby lightning strike, frying Dave’s air conditioner, gate, and Wi-Fi. While food and gas were unavailable, Dave and his wife spent time at Bella Regalo in Fredericksburg, Texas, with his son, Mark, and his wife, Georgia. • Mary-Jane Atwater, Lois Lake Church, Lynn Gilligan Everhart, and Elsa Calderón serve on the NMH Alumni Council, which comprises representatives from the different alumni constituencies (classes, regions, affiliated groups). They serve a variety of functions, including reunion planning, supporting diversity events on and off campus, assisting with advancement goals and events, and representing the alumni body at Board of Trustees meetings. They meet monthly by phone and once a year in person to discuss issues pertaining to NMH, and they’ll report to our class periodically during the year so we’ll know what’s happening at NMH. • Jean Penney Borntraeger Wheeler had dinner with Suzie Steenburg Hill last August, taking Jean’s visiting (English) grandchildren and son-in-law for a fun family dinner! An unanticipated gift over the course of the years has been the close and precious new friendships that have blossomed from the shared experience of years at Northfield, where we hardly knew one another. • Closing with some very sad news, Elaine Rankin Bailey ’55 passed away on 11/26/17. She was a wonderful, cheerful, and special woman. Our

thoughts and condolences go out to Carroll, her devoted husband. You may search for and read Elaine’s obituary at massachusetts. funeral.com. • Be well and happy — every day is a gift as are each of you to the rest of us! — Jean Penney Borntraeger Wheeler and Frank Sapienza

Northfield Mount Hermon Donna Eaton-Mahoney dmeato@outlook.com • Dana L. Gordon mounthermon1967@comcast.net As we submit these notes, our 50th reunion still remains fresh in our minds. As you read this, we are already 20 percent of the way to our 55th. Will Eddy was one of many who had a great time at reunion. He and his wife, Anna, followed up with a December trip to Boston to see their daughter-in-law, Jessica, in Bedlam Theater’s production of Sense and Sensibility at American Repertory Theater. Rick Eastwick and wife Marie joined them at the show. Will was counting on Rick to remember anything from their year together in Crossley under the care of Rudy Weber. The Eddys also traveled to Mexico, Israel, and France last year. They found Paris special and boating down the Seine with one other couple was spectacular. • John Cartledge was pleased that our 50th reunion was such a success. Although he couldn’t attend in person, he was with us all in spirit, at least, from halfway around the world. He retired from “wage slavery” a few years ago in order to concentrate on other interests, such as researching and promoting a network of walking trails in the countryside around his hometown, and serving as a trustee of an educational charity that promotes the study of elections and electoral systems. John also presented a paper at the 27th International Congress of Vexillology (the study of flags) this year. John’s successor as rail safety advisor to London TravelWatch and Transport Focus has gone on sabbatical leave, so he finds himself unexpectedly co-opted back into gainful employment. It’s comforting to know that one hasn’t been forgotten, and that we seniors still have our uses when the need arises. • Carole “Ducky” Drake Chamberlain is retired and living in Ferrisburg, Vt., for 45 years now. Living close to Lake Champlain and the mountains over the years, Ducky has skied and boated a great deal, but has become less enamored of the cold winter, so she and her husband spend the winter in Mazatlán, Mexico. Ducky was a French teacher for years and is now learning Spanish. • Bill Johnson’s second grandchild, Miles Louis, arrived in August 2017. Bill calls

him a great blessing. He has enjoyed his once-a-week “doc” gig that his hospital has allowed him. He also put his skills to work on a brief medical mission. • After evacuating for Hurricane Irma with his mother, her caregivers, and his dog, Jay Garbose had a beautiful weekend in New York City. Will Ackerman and his group named FLOW debuted their New Age album with a concert at Carnegie Hall. Jay was invited to their after-party and got to meet Will’s wife, Susie, and many hugely creative Grammy-level music people. Prior to the concert, Sylvia Kuhner Baer and husband John hosted Holly Taggart Joseph and John Keller and Jay for a swanky luncheon at the Yale Club of New York City. Tina Dobsevage made time from her incredibly busy medical practice and joined Jay for Sunday. However, not long after, Jay lost his mom. Hoping to offer some comfort, Maureen and Chuck Streeter made a home-cooked dinner at their timeshare in Palm Beach. Jay credits our 50th reunion with helping bring him together with old and new friends. • Congratulations to Sylvia Kuhner Baer, who was named a Yale Fellow. She was chosen as a leader in her profession, an honor in the world of academia. The selection was especially meaningful to Sylvia, who was told 50 years ago that she could not attend Yale because she was a woman. • Wendy Alderman Cohen hosted a lobster dinner for classmates in September. The feast was thoroughly enjoyed by Becky Parfitt Kennedy and Vin Kennedy, Laura Thompson, Bonnie Parmenter Fleming, and

Keep Calm and Carry On

The NMH bookstore can help outfit you and your family. Visit the NEW and IMPROVED online store for great gift ideas.