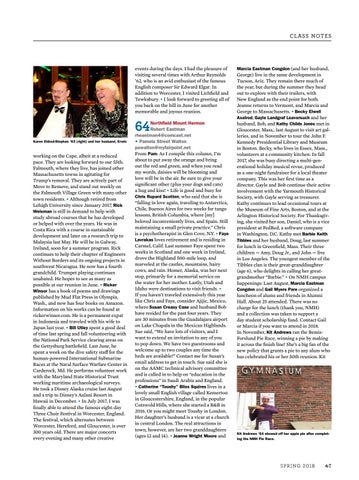 events during the days. I had the pleasure of visiting several times with Arthur Reynolds ’62, who is an avid enthusiast of the famous English composer Sir Edward Elgar. In addition to Worcester, I visited Lichfield and Tewksbury. • I look forward to greeting all of you back on the hill in June for another memorable and joyous reunion.

working on the Cape, albeit at a reduced pace. They are looking forward to our 55th. Falmouth, where they live, has joined other Massachusetts towns in agitating for Trump’s removal. They are actively part of Move to Remove, and stand out weekly on the Falmouth Village Green with many other town residents. • Although retired from Lehigh University since January 2017, Rick Weisman is still in demand to help with study abroad courses that he has developed or helped with over the years. He was in Costa Rica with a course in sustainable development and later on a research trip to Malaysia last May. He will be in Galway, Ireland, soon for a summer program. Rick continues to help their chapter of Engineers Without Borders and its ongoing projects in southwest Nicaragua. He now has a fourth grandchild. Trumpet playing continues unabated. He hopes to see as many as possible at our reunion in June. • Ricker Winsor has a book of poems and drawings published by Mud Flat Press in Olympia, Wash., and now has four books on Amazon. Information on his works can be found at rickerwinsor.com. He is a permanent expat in Indonesia and traveled with his wife to Japan last year. • Bill Utley spent a good deal of time last spring and fall volunteering with the National Park Service clearing areas on the Gettysburg battlefield. Last June, he spent a week on the dive safety staff for the human-powered International Submarine Races at the Naval Surface Warfare Center in Carderock, Md. He performs volunteer work with the Maryland State Historical Trust working maritime archaeological surveys. He took a Disney Alaska cruise last August and a trip to Disney’s Aulani Resort in Hawaii in December. • In July 2017, I was finally able to attend the famous eight-day Three Choir Festival in Worcester, England. The festival, which alternates between Worcester, Hereford, and Gloucester, is over 300 years old. There are major concerts every evening and many other creative

Northfield Mount Hermon Robert Eastman rheastman4@comcast.net • Pamela Street Walton pawalton@myfairpoint.net From Pam: As I compile this column, I’m about to put away the orange and bring out the red and green, and when you read my words, daisies will be blooming and love will be in the air. Be sure to give your significant other (plus your dogs and cats) a hug and kiss! • Life is good and busy for Chris Rupard Scotten, who said that she is “falling in love again, traveling to Antarctica, Chile, Buenos Aires for two weeks for tango lessons, British Columbia, where [my] beloved inconveniently lives, and Spain. Still maintaining a small private practice.” Chris is a psychotherapist in Glen Cove, N.Y. • Faye Lavrakas loves retirement and is residing in Carmel, Calif. Last summer Faye spent two weeks in Scotland and one week in Ireland, drove the Highland 500-mile loop, and marveled at the castles, mountains, hairy cows, and rain. Homer, Alaska, was her next stop, primarily for a memorial service on the water for her mother. Lastly, Utah and Idaho were destinations to visit friends. • If you haven’t traveled extensively this year like Chris and Faye, consider Ajijic, Mexico, where Susan Creasy Case and husband Bob have resided for the past four years. They are 30 minutes from the Guadalajara airport on Lake Chapala in the Mexican Highlands. Sue said, “We have lots of visitors, and I want to extend an invitation to any of you to pop down. We have two guestrooms and welcome up to two couples any time the beds are available!” Contact me for Susan’s email address to get in touch. Sue said she is on the AAMC technical advisory committee and is called in to help on “education in the professions” in Saudi Arabia and England. • Catherine “Toushy” Bliss Squires lives in a lovely small English village called Kemerton in Gloucestershire, England, in the popular Cotswold Hills, where she started a B&amp;B in 2016. Or you might meet Toushy in London. Her daughter’s husband is a vicar at a church in central London. The real attractions in town, however, are her two granddaughters (ages 12 and 14). • Jeanne Wright Moore and

Marcia Eastman Congdon (and her husband,

George) live in the same development in Tucson, Ariz. They remain there much of the year, but during the summer they head out to explore with their trailers, with New England as the end point for both. Jeanne returns to Vermont, and Marcia and George to Massachusetts. • Becky Elwell Axelrod, Gayle Landgraf Leaversuch and her husband, Bob, and Kathy Childs Jones met in Gloucester, Mass., last August to visit art galleries, and in November to tour the John F. Kennedy Presidential Library and Museum in Boston. Becky, who lives in Essex, Mass., volunteers at a community kitchen. In fall 2017, she was busy directing a multi-generational holiday musical revue, produced as a one-night fundraiser for a local theater company. This was her first time as a director. Gayle and Bob continue their active involvement with the Yarmouth Historical Society, with Gayle serving as treasurer. Kathy continues to lead occasional tours at the Museum of Fine Arts, Boston, and at the Arlington Historical Society. For Thanksgiving, she visited her son, Daniel, who is a vice president at FedBed, a software company in Washington, D.C. Kathy met Barbie Keith Tibbles and her husband, Doug, last summer for lunch in Greenfield, Mass. Their three children — Amy, Doug Jr., and John — live in Los Angeles. The youngest member of the Tibbles clan is their great-granddaughter (age 6), who delights in calling her greatgrandmother “Barbie.” • On NMH campus happenings: Last August, Marcia Eastman Congdon and Gail Myers Pare organized a luncheon of alums and friends in Alumni Hall. About 25 attended. There was no charge for the lunch (thank you, NMH) and a collection was taken to support a day student scholarship fund. Contact Gail or Marcia if you want to attend in 2018. In November, Kit Andrews ran the BemisForslund Pie Race, winning a pie by making it across the finish line! She’s a big fan of the new policy that grants a pie to any alum who has celebrated his or her 50th reunion. Kit

Kit Andrews ’64 showed off her apple pie after completing the NMH Pie Race.