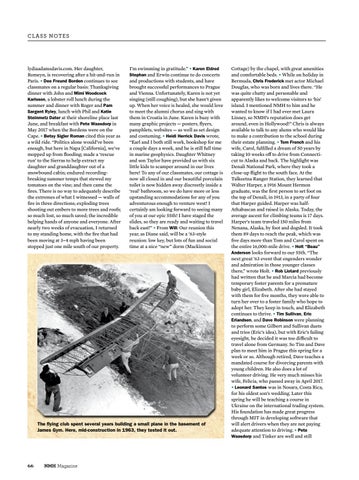 lydiaadamsdavis.com. Her daughter, Romeyn, is recovering after a hit-and-run in Paris. • Dee Freund Borden continues to see classmates on a regular basis: Thanksgiving dinner with John and Mimi Woodcock Karlsson, a lobster roll lunch during the summer and dinner with Roger and Pam Sargent Ryley, lunch with Phil and Katie Steinmetz Dater at their shoreline place last June, and breakfast with Pete Waasdorp in May 2017 when the Bordens were on the Cape. • Betsy Sigler Roman cited this year as a wild ride. “Politics alone would’ve been enough, but here in Napa [California], we’ve mopped up from flooding; made a ‘rescue run’ to the Sierras to help extract my daughter and granddaughter out of a snowbound cabin; endured recordingbreaking summer temps that stewed my tomatoes on the vine; and then came the fires. There is no way to adequately describe the extremes of what I witnessed — walls of fire in three directions; exploding trees shooting out embers to more trees and roofs; so much lost, so much saved; the incredible helping hands of anyone and everyone. After nearly two weeks of evacuation, I returned to my standing home, with the fire that had been moving at 3–4 mph having been stopped just one mile south of our property.

I’m swimming in gratitude.” • Karen Eldred Stephan and Erwin continue to do concerts and productions with students, and have brought successful performances to Prague and Vienna. Unfortunately, Karen is not yet singing (still coughing), but she hasn’t given up. When her voice is healed, she would love to meet the alumni chorus and sing with them in Croatia in June. Karen is busy with many graphic projects — posters, flyers, pamphlets, websites — as well as set design and costuming. • Heidi Herrick Davis wrote, “Earl and I both still work, bookshop for me a couple days a week, and he is still full time in marine geophysics. Daughter Whitney and son Taylor have provided us with six little kids to scamper around in our lives here! To any of our classmates, our cottage is now all closed in and our beautiful porcelain toilet is now hidden away discreetly inside a ‘real’ bathroom, so we do have more or less upstanding accommodations for any of you adventurous enough to venture west! I certainly am looking forward to seeing many of you at our epic 55th! I have staged the slides, so they are ready and waiting to travel back east!” • From Will: Our reunion this year, as Diane said, will be a ’63-style reunion: low key, but lots of fun and social time at a nice “new” dorm (Mackinnon

The flying club spent several years building a small plane in the basement of James Gym. Here, mid-construction in 1963, they tested it out.

Cottage) by the chapel, with great amenities and comfortable beds. • While on holiday in Bermuda, Chris Frederick met actor Michael Douglas, who was born and lives there. “He was quite chatty and personable and apparently likes to welcome visitors to ‘his’ island. I mentioned NMH to him and he wanted to know if I had ever met Laura Linney, so NMH’s reputation does get around, even in Hollywood!” Chris is always available to talk to any alums who would like to make a contribution to the school during their estate planning. • Tom French and his wife, Carol, fulfilled a dream of 50 years by taking 10 weeks off to drive from Connecticut to Alaska and back. The highlight was Denali National Park, where they took a close-up flight to the south face. At the Talkeetna Ranger Station, they learned that Walter Harper, a 1916 Mount Hermon graduate, was the first person to set foot on the top of Denali, in 1913, in a party of four that Harper guided. Harper was halfAthabascan and raised in Alaska. Today, the average ascent for climbing teams is 17 days. Harper’s team traveled 150 miles from Nenana, Alaska, by foot and dogsled. It took them 89 days to reach the peak, which was five days more than Tom and Carol spent on the entire 16,000-mile drive. • Holt “Beau” Anderson looks forward to our 55th. “The next great ’63 event that engenders wonder and admiration in those younger classes there,” wrote Holt. • Rob Liotard previously had written that he and Marcia had become temporary foster parents for a premature baby girl, Elizabeth. After she had stayed with them for five months, they were able to turn her over to a foster family who hope to adopt her. They keep in touch, and Elizabeth continues to thrive. • Tim Sullivan, Eric Erlandsen, and Dave Robinson were planning to perform some Gilbert and Sullivan duets and trios (Eric’s idea), but with Eric’s failing eyesight, he decided it was too difficult to travel alone from Germany. So Tim and Dave plan to meet him in Prague this spring for a week or so. Although retired, Dave teaches a mandated course for divorcing parents with young children. He also does a lot of volunteer driving. He very much misses his wife, Felicia, who passed away in April 2017. • Leonard Santos was in Nosara, Costa Rica, for his oldest son’s wedding. Later this spring he will be teaching a course in Ukraine on the international trading system. His foundation has made great progress through MIT in developing software that will alert drivers when they are not paying adequate attention to driving. • Pete Waasdorp and Tinker are well and still