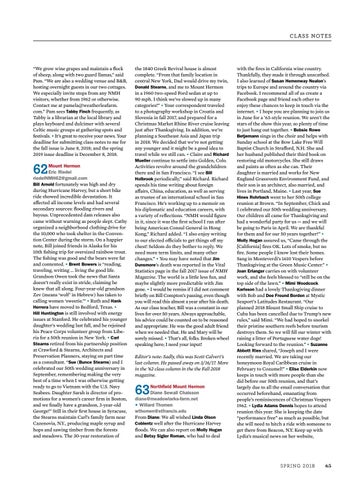 “We grow wine grapes and maintain a flock of sheep, along with two guard llamas,” said Pam. “We are also a wedding venue and B&amp;B, hosting overnight guests in our two cottages. We especially invite stops from any NMH visitors, whether from 1962 or otherwise. Contact me at pamela@weatherleafarm. com.” Pam sees Tabby Finch frequently, as Tabby is a librarian at the local library and plays keyboard and dulcimer with several Celtic music groups at gathering spots and festivals. • It’s great to receive your news. Your deadline for submitting class notes to me for the fall issue is June 8, 2018; and the spring 2019 issue deadline is December 8, 2018.

Mount Hermon Eric Riedel riedelNMH62@gmail.com Bill Arnold fortunately was high and dry during Hurricane Harvey, but a short bike ride showed incredible devastation. It affected all income levels and had several secondary sources: flooding rivers and bayous. Unprecedented dam releases also came without warning as people slept. Cathy organized a neighborhood clothing drive for the 10,000 who took shelter in the Convention Center during the storm. On a happier note, Bill joined friends in Alaska for his 10th fishing trip for oversized rainbow trout. The fishing was good and the bears were fat and contented. • Brent Bowers is “reading, traveling, writing ... living the good life. Grandson Owen took the news that Santa doesn’t really exist in stride, claiming he knew that all along. Four-year-old grandson Zev (means ‘wolf’ in Hebrew) has taken to calling women ‘sweetie.’” • Ruth and Hank Herrera have moved to Bedford, Texas. • Hill Huntington is still involved with energy issues at Stanford. He celebrated his younger daughter’s wedding last fall, and he rejoined his Peace Corps volunteer group from Liberia for a 50th reunion in New York. • Carl Stearns retired from his partnership position at Crawford &amp; Stearns, Architects and Preservation Planners, staying on part time as a consultant. “Sue (Bunce Stearns) and I celebrated our 50th wedding anniversary in September, remembering making the very best of a time when I was otherwise getting ready to go to Vietnam with the U.S. Navy Seabees. Daughter Sarah is director of promotions for a women’s career firm in Boston, and we finally have a grandson, 3-year-old George!” Still in their first house in Syracuse, the Stearns maintain Carl’s family farm near Cazenovia, N.Y., producing maple syrup and hops and sawing timber from the forests and meadows. The 30-year restoration of

the 1840 Greek Revival house is almost complete. “From that family location in central New York, Dad would drive my twin, Donald Stearns, and me to Mount Hermon in a 1960 two-speed Ford sedan at up to 90 mph. I think we’ve slowed up in many categories!” • Your correspondent traveled to a photography workshop in Croatia and Slovenia in fall 2017, and prepared for a Christmas Market Rhine River cruise leaving just after Thanksgiving. In addition, we’re planning a Southeast Asia and Japan trip in 2018. We decided that we’re not getting any younger and it might be a good idea to travel while we still can. • Claire and Richard Mueller continue to settle into Golden, Colo. Activities revolve around the grandchildren there and in San Francisco. “I see Bill Holbrook periodically,” said Richard. Richard spends his time writing about foreign affairs, China, education, as well as serving as trustee of an international school in San Francisco. He’s working up to a memoir on his diplomatic and education careers, with a variety of reflections. “NMH would figure in it, since it was the first school I ran after being American Consul General in Hong Kong,” Richard added. “I also enjoy writing to our elected officials to get things off my chest! Seldom do they bother to reply. We need more term limits, and many other changes.” • You may have noted that Jim Dunsmore’s death was reported in the Vital Statistics page in the fall 2017 issue of NMH Magazine. The world is a little less fun, and maybe slightly more predictable with Jim gone. • I would be remiss if I did not comment briefly on Bill Compton’s passing, even though you will read this almost a year after his death. As our class teacher, Bill was a constant in our lives for over 50 years. Always approachable, his advice could be counted on to be reasoned and appropriate. He was the good adult friend when we needed that. He and Mary will be sorely missed. • That’s all, folks. Broken wheel speaking here; I need your input! Editor’s note: Sadly, this was Scott Calvert’s last column. He passed away on 3/16/17. More in the ’62 class column in the the Fall 2018 magazine.

Northfield Mount Hermon Diane Sewall Chaisson diane@meadowlarks-farm.net • Willard Thomen wthomen@stfrancis.edu From Diane: We all wished Linda Olson Coblentz well after the Hurricane Harvey floods. We can also report on Molly Hogan and Betsy Sigler Roman, who had to deal

with the fires in California wine country. Thankfully, they made it through unscathed. I also learned of Susan Hemenway Nealon’s trips to Europe and around the country via Facebook. I recommend all of us create a Facebook page and friend each other to enjoy these chances to keep in touch via the internet. • I hope you are planning to join us in June for a ’63-style reunion. We aren’t the stars of the show this year, so plenty of time to just hang out together. • Bobsie Rowe Betjemann sings in the choir and helps with Sunday school at the Bow Lake Free Will Baptist Church in Strafford, N.H. She and her husband published their third book on restoring old motorcycles. She still draws and paints as often as she can. Their daughter is married and works for New England Grassroots Environment Fund, and their son is an architect, also married, and lives in Portland, Maine. • Last year, Sue Hines Rohrbach went to her 50th college reunion at Brown. “In September, Chick and I celebrated our 50th wedding anniversary. Our children all came for Thanksgiving and had a wonderful party for us — and we will be going to Paris in April. We are thankful for them and for our 50 years together!” • Molly Hogan assured us, “Came through the [California] fires OK. Lots of smoke, but no fire. Some people I know lost their homes. Sang in Monteverdi’s 1610 Vespers before Thanksgiving at the Green Music Center.” • Joan Erlanger carries on with volunteer work, and she feels blessed to “still be on the top side of the lawn.” • Mimi Woodcock Karlsson had a lovely Thanksgiving dinner with Bob and Dee Freund Borden at Mystic Seaport’s Latitudes Restaurant. “Our planned 2018 Blount Small Ship cruise to Cuba has been cancelled due to Trump’s new rules,” said Mimi. “We had hoped to snorkel their pristine southern reefs before tourism destroys them. So we will fill our winter with raising a litter of Portuguese water dogs! Looking forward to the reunion.” • Suzanne Abbott Ries shared, “Joseph and I were recently married. We are taking our honeymoon Royal Caribbean cruise in February to Cozumel!” • Elise Elderkin now keeps in touch with more people than she did before our 50th reunion, and that’s largely due to all the email conversation that occurred beforehand, emanating from people’s reminiscences of Christmas Vespers 1962. • Lydia Adams Dennis hopes to attend reunion this year. She is keeping the date “performance free” as much as possible, but she will need to hitch a ride with someone to get there from Beacon, N.Y. Keep up with Lydia’s musical news on her website,