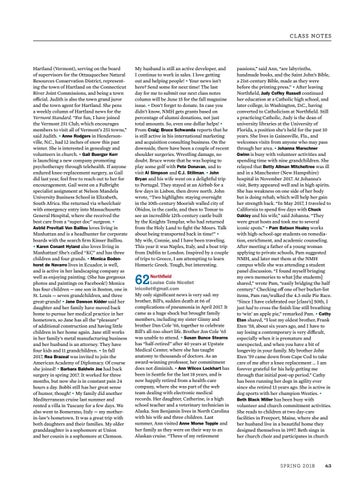 Hartland (Vermont), serving on the board of supervisors for the Ottauquechee Natural Resources Conservation District, representing the town of Hartland on the Connecticut River Joint Commissions, and being a town official. Judith is also the town grand juror and the town agent for Hartland. She pens a weekly column of Hartland news for the Vermont Standard. “For fun, I have joined the Vermont 251 Club, which encourages members to visit all of Vermont’s 251 towns,” said Judith. • Anne Rodgers in Hendersonville, N.C., had 12 inches of snow this past winter. She is interested in genealogy and volunteers in church. • Gail Buerger Kerr is launching a new company promoting psychotherapy through telehealth. If anyone endured knee-replacement surgery, as Gail did last year, feel free to reach out to her for encouragement. Gail went on a Fulbright specialist assignment at Nelson Mandela University Business School in Elizabeth, South Africa. She returned via wheelchair with emergency entry into Massachusetts General Hospital, where she received the best care from a “super doc” surgeon. • Astrid Previtali Von Baillou loves living in Manhattan and is a headhunter for corporate boards with the search firm Kinser Baillou. • Karen Conant Hyland also loves living in Manhattan! She’s called “KC” and has three children and four grands. • Monica Bodenhorst de Navarro lives in Ecuador, is well, and is active in her landscaping company as well as enjoying painting. (She has gorgeous photos and paintings on Facebook!) Monica has four children — one son in Boston, one in St. Louis — seven grandchildren, and three great-grands! • Jane Dawson Kidder said her daughter and her family have moved back home to pursue her medical practice in her hometown, so Jane has all the “pleasure” of additional construction and having little children in her home again. Jane still works in her family’s metal manufacturing business and her husband is an attorney. They have four kids and 11 grandchildren. • In fall 2017, Rea Brazeal was invited to join the American Academy of Diplomacy. Of course she joined! • Barbara Baldwin Joe had back surgery in spring 2017. It worked for three months, but now she is in constant pain 24 hours a day. Bobbi still has her great sense of humor, though! • My family did another Mediterranean cruise last summer and rented a villa in Tuscany for a few days. We also went to Bomerano, Italy — my motherin-law’s hometown. It was a great trip with both daughters and their families. My older granddaughter is a sophomore at Union and her cousin is a sophomore at Clemson.

My husband is still an active developer, and I continue to work in sales. I love getting out and helping people! • Your news isn’t here? Send some for next time! The last day for me to submit our next class notes column will be June 15 for the fall magazine issue. • Don’t forget to donate. In case you didn’t know, NMH gets grants based on percentage of alumni donations, not just total amounts. So, even one dollar helps! • From Craig: Bruce Schwanda reports that he is still active in his international marketing and acquisition consulting business. On the downside, there have been a couple of recent shoulder surgeries. Wrestling damage, no doubt. Bruce wrote that he was hoping to play some golf with Pete Donavan, and to visit Al Simpson and C.J. Stillman. • John Bryan and his wife went on a delightful trip to Portugal. They stayed at an Airbnb for a few days in Lisbon, then drove north. John wrote, “Two highlights: staying overnight in the 10th-century Moorish walled city of Óbidos, in the castle, and then to Tomar to see an incredible 12th-century castle built by the Knights Templar, who had returned from the Holy Land to fight the Moors. Talk about being transported back in time!” • My wife, Connie, and I have been traveling. This year it was Naples, Italy, and a boat trip from Dublin to London. Inspired by a couple of trips to Greece, I am attempting to learn Homeric Greek. Tough, but interesting.

Northfield Louise Cole Nicollet lnicollet@gmail.com My only significant news is very sad: my brother, Bill’s, sudden death at 66 of complications of pneumonia in April 2017. It came as a huge shock but brought family members, including my sister Ginny and brother Dan Cole ’66, together to celebrate Bill’s all-too-short life. Brother Jon Cole ’65 was unable to attend. • Susan Bunce Stearns has “half-retired” after 40 years at Upstate Medical Center, where she has taught anatomy to thousands of doctors. As an award-winning professor, her commitment does not diminish. • Ann Wilcox Lockhart has been in Seattle for the last 18 years, and is now happily retired from a health-care company, where she was part of the web team dealing with electronic medical records. Her daughter, Catherine, is a high school teacher and a veterinary technician in Alaska. Son Benjamin lives in North Carolina with his wife and three children. Last summer, Ann visited Anne Morse Topple and her family as they were on their way to an Alaskan cruise. “Three of my retirement

passions,” said Ann, “are labyrinths, handmade books, and the Saint John’s Bible, a 21st-century Bible, made as they were before the printing press.” • After leaving Northfield, Judy Coffey Russell continued her education at a Catholic high school, and later college, in Washington, D.C., having converted to Catholicism at Northfield. Still a practicing Catholic, Judy is the dean of university libraries at the University of Florida, a position she’s held for the past 10 years. She lives in Gainesville, Fla., and welcomes visits from anyone who may pass through her area. • Johanna Marschner Gwinn is busy with volunteer activities and spending time with nine grandchildren. She relayed that Betty Allman Mitcheltree was ill and in a Manchester (New Hampshire) hospital in November 2017. At Johanna’s visit, Betty appeared well and in high spirits. She has weakness on one side of her body but is doing rehab, which will help her gain her strength back. “In May 2017, I traveled to California to spend five days with Chuck Oakley and his wife,” said Johanna. “They were great hosts and took me to several iconic spots.” • Pam Batson Healey works with high-school-age students on remediation, enrichment, and academic counseling. After meeting a father of a young woman applying to private schools, Pam suggested NMH, and later met them at the NMH campus while she was attending a student panel discussion. “I found myself bringing my own memories to what [the students] shared,” wrote Pam, “easily bridging the half century.” Checking off one of her bucket-list items, Pam ran/walked the 4.3-mile Pie Race. “Since I have celebrated our [class’s] 50th, I just had to cross the finish line still breathing to ‘win’ an apple pie,” remarked Pam. • Cathy Eten shared, “I lost my oldest brother, Frank Eten ’58, about six years ago, and I have to say losing a contemporary is very difficult, especially when it is premature and unexpected, and when you have a bit of longevity in your family. My brother John Eten ’59 came down from Cape Cod to take care of me after a knee replacement … I am forever grateful for his help getting me through that initial post-op period.” Cathy has been running her dogs in agility ever since she retired 13 years ago. She is active in dog sports with her champion Westies. • Beth Black Miller has been busy with volunteer and church commitment activities. She reads to children at two day-care facilities in Freeport, Maine, where she and her husband live in a beautiful home they designed themselves in 1997. Beth sings in her church choir and participates in church