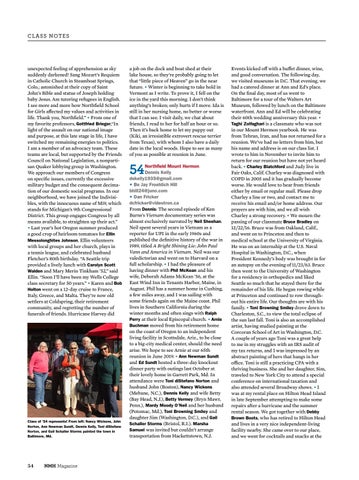 unexpected feeling of apprehension as sky suddenly darkened! Sang Mozart’s Requiem in Catholic Church in Steamboat Springs, Colo.; astonished at their copy of Saint John’s Bible and statue of Joseph holding baby Jesus. Am tutoring refugees in English. I see more and more how Northfield School for Girls affected my values and activities in life. Thank you, Northfield.” • From one of my favorite professors, Gottfried Brieger,“In light of the assault on our national image and purpose, at this late stage in life, I have switched my remaining energies to politics. I am a member of an advocacy team. These teams are local, but supported by the Friends Council on National Legislation, a nonpartisan Quaker lobbying group in Washington. We approach our members of Congress on specific issues, currently the excessive military budget and the consequent decimation of our domestic social programs. In our neighborhood, we have joined the Indivisibles, with the innocuous name of Mi9, which stands for Michigan’s 9th Congressional District. This group engages Congress by all means available, to straighten up their act.” • Last year’s hot Oregon summer produced a good crop of heirloom tomatoes for Ellin Messolonghites Johnson. Ellin volunteers with local groups and her church, plays in a tennis league, and celebrated husband Fletcher’s 80th birthday. “A Seattle trip provided a lively lunch with Carolyn Scott Walden and Mary Merin Tinkham ’52,” said Ellin. “Soon I’ll have been my Wells College class secretary for 50 years.” • Karen and Bob Holton went on a 12-day cruise to France, Italy, Greece, and Malta. They’re now old settlers at Coldspring, their retirement community, and regretting the number of funerals of friends. Hurricane Harvey did

a job on the dock and boat shed at their lake house, so they’re probably going to let that “little piece of Heaven” go in the near future. • Winter is beginning to take hold in Vermont as I write. To prove it, I fell on the ice in the yard this morning. I don’t think anything’s broken; only hurts if I move. Ida is still in her nursing home, no better or worse that I can see. I visit daily, we chat about friends, I read to her for half an hour or so. Then it’s back home to let my puppy out (Kiki, an irresistible extrovert rescue terrier from Texas), with whom I also have a daily date in the local woods. Hope to see as many of you as possible at reunion in June.

Northfield Mount Hermon Dennis Kelly dskelly1935@gmail.com • Be Jay Froehlich Hill bhill24@juno.com • Dan Fricker dcfricker@videotron.ca From Dennis: The second episode of Ken Burns’s Vietnam documentary series was almost exclusively narrated by Neil Sheehan. Neil spent several years in Vietnam as a reporter for UPI in the early 1960s and published the definitive history of the war in 1989, titled A Bright Shining Lie: John Paul Vann and America in Vietnam. Neil was our valedictorian and went on to Harvard on a full scholarship. • I had the pleasure of having dinner with Phil McKean and his wife, Deborah Adams McKean ’56, at the East Wind Inn in Tenants Harbor, Maine, in August. Phil has a summer home in Cushing, a few miles away, and I was sailing with some friends again on the Maine coast. Phil lives in Southern California during the winter months and often sings with Ralph Perry at their local Episcopal church. • Arnie Buchman moved from his retirement home on the coast of Oregon to an independent living facility in Scottsdale, Ariz., to be close to a big-city medical center, should the need arise. We hope to see Arnie at our 65th reunion in June 2019. • Ann Newman Sundt and Ed Sundt hosted a three-day knockout dinner party with outings last October at their lovely home in Garrett Park, Md. In attendance were Toni diStefano Norton and husband John (Boston), Nancy Wickens (Mebane, N.C.), Dennis Kelly and wife Betty (Bay Head, N.J.), Betty Vermey (Bryn Mawr, Penn.), Mardy Moody O’Neil and her husband (Potomac, Md.), Toni Browning Smiley and daughter Sim (Washington, D.C.), and Gail Schaller Storms (Bristol, R.I.). Marsha Samuel was invited but couldn’t arrange transportation from Hackettstown, N.J.

Events kicked off with a buffet dinner, wine, and good conversation. The following day, we visited museums in D.C. That evening, we had a catered dinner at Ann and Ed’s place. On the final day, most of us went to Baltimore for a tour of the Walters Art Museum, followed by lunch on the Baltimore waterfront. Ann and Ed will be celebrating their 60th wedding anniversary this year. • Taghi Zolfaghari is a classmate who was not in our Mount Hermon yearbook. He was from Tehran, Iran, and has not returned for a reunion. We’ve had no letters from him, but his name and address is on our class list. I wrote to him in November to invite him to return for our reunion but have not yet heard back. • Charley Blatchford and Judy live in Fair Oaks, Calif. Charley was diagnosed with COPD in 2005 and it has gradually become worse. He would love to hear from friends either by email or regular mail. Please drop Charley a line or two, and contact me to receive his email and/or home address. Our prayers are with him, and we all wish Charley a strong recovery. • We mourn the passing of our classmate Bruce Bradley on 12/22/16. Bruce was from Oakland, Calif., and went on to Princeton and then to medical school at the University of Virginia. He was on an internship at the U.S. Naval Hospital in Washington, D.C., when President Kennedy’s body was brought in for an autopsy on the evening of 11/23/63. Bruce then went to the University of Washington for a residency in orthopedics and liked Seattle so much that he stayed there for the remainder of his life. He began rowing while at Princeton and continued to row throughout his entire life. Our thoughts are with his family. • Toni Browning Smiley drove down to Charleston, S.C., to view the total eclipse of the sun last fall. Toni is also an accomplished artist, having studied painting at the Corcoran School of Art in Washington, D.C. A couple of years ago Toni was a great help to me in my struggles with an IRS audit of my tax returns, and I was impressed by an abstract painting of hers that hangs in her office. Toni is still a practicing CPA with a thriving business. She and her daughter, Sim, traveled to New York City to attend a special conference on international taxation and also attended several Broadway shows. • I was at my rental place on Hilton Head Island in late September attempting to make some repairs after a hurricane and the summer rental season. We got together with Debby Brown Boots, who has retired to Hilton Head and lives in a very nice independent-living facility nearby. She came over to our place, and we went for cocktails and snacks at the