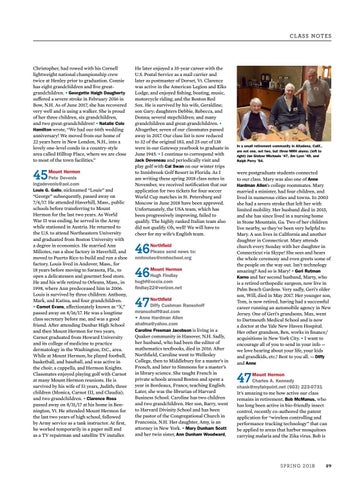 Christopher, had rowed with his Cornell lightweight national championship crew twice at Henley prior to graduation. Connie has eight grandchildren and five greatgrandchildren. • Georgette Haigh Daugherty suffered a severe stroke in February 2016 in Bow, N.H. As of June 2017, she has recovered very well and is using a walker. She is proud of her three children, six grandchildren, and two great-grandchildren! • Natalie Cole Hamilton wrote, “We had our 66th wedding anniversary! We moved from our home of 22 years here in New London, N.H., into a lovely one-level condo in a country-style area called Hilltop Place, where we are close to most of the town facilities.”

Mount Hermon Pete Devenis ingadevenis@aol.com Louis G. Gallo, nicknamed “Louie” and “George” subsequently, passed away on 7/4/17. He attended Haverhill, Mass., public schools before transferring to Mount Hermon for the last two years. As World War II was ending, he served in the Army while stationed in Austria. He returned to the U.S. to attend Northeastern University and graduated from Boston University with a degree in economics. He married Ann Miliotes, ran a shoe factory in Haverhill, and moved to Puerto Rico to build and run a shoe factory. Louis lived in Andover, Mass., for 18 years before moving to Sarasota, Fla., to open a delicatessen and gourmet food store. He and his wife retired to Orleans, Mass., in 1998, where Ann predeceased him in 2006. Louis is survived by three children: Anthony, Mark, and Katina, and four grandchildren. • Carnot Evans, affectionately known as “X,” passed away on 8/16/17. He was a longtime class secretary before me, and was a good friend. After attending Dunbar High School and then Mount Hermon for two years, Carnot graduated from Howard University and its college of medicine to practice dermatology in the Washington, D.C., area. While at Mount Hermon, he played football, basketball, and baseball, and was active in the choir, a cappella, and Hermon Knights. Classmates enjoyed playing golf with Carnot at many Mount Hermon reunions. He is survived by his wife of 51 years, Judith; three children (Monica, Carnot III, and Claudia); and two grandchildren. • Clarence Ross passed away on 8/31/17 at his home in Bennington, Vt. He attended Mount Hermon for the last two years of high school, followed by Army service as a tank instructor. At first, he worked temporarily in a paper mill and as a TV repairman and satellite TV installer.

He later enjoyed a 35-year career with the U.S. Postal Service as a mail carrier and later as postmaster of Dorset, Vt. Clarence was active in the American Legion and Elks Lodge, and enjoyed fishing, boating, music, motorcycle riding, and the Boston Red Sox. He is survived by his wife, Geraldine; son Gary; daughters Debbie, Rebecca, and Donna; several stepchildren; and many grandchildren and great-grandchildren. • Altogether, seven of our classmates passed away in 2017. Our class list is now reduced to 32 of the original 183, and 25 out of 138 were in our Gateway yearbook to graduate in June 1945. • I continue to correspond with Jack Deveneau and periodically visit and play golf with Cal Swan on our winter trips to Innisbrook Golf Resort in Florida. As I am writing these spring 2018 class notes in November, we received notification that our application for two tickets for four soccer World Cup matches in St. Petersburg and Moscow in June 2018 have been approved. Unfortunately, the USA team, which has been progressively improving, failed to qualify. The highly ranked Italian team also did not qualify. Oh, well! We will have to cheer for my wife’s English team.

Northfield Diffy Cushman Ransohoff mransohoff@aol.com • Anne Hardman Allen ahafma@yahoo.com Caroline Freeman Jacobson is living in a Quaker community in Hanover, N.H. Sadly, her husband, who had been the editor of mathematics textbooks, died in 2016. After Northfield, Caroline went to Wellesley College, then to Middlebury for a master’s in French, and later to Simmons for a master’s in library science. She taught French in private schools around Boston and spent a year in Bordeaux, France, teaching English. Later, she was the librarian of Harvard Business School. Caroline has two children and two grandchildren. Her son, Barry, went to Harvard Divinity School and has been the pastor of the Congregational Church in Franconia, N.H. Her daughter, Amy, is an attorney in New York. • Mary Dunham Scott and her twin sister, Ann Dunham Woodward,

In a small retirement community in Altadena, Calif., are not one, not two, but three NMH alums: (left to right) Jan Glotzer Michaels ’47, Jim Lyon ’49, and Ralph Perry ’54.

were postgraduate students connected to our class. Mary was also one of Anne Hardman Allen’s college roommates. Mary married a minister, had four children, and lived in numerous cities and towns. In 2003 she had a severe stroke that left her with limited mobility. Her husband died in 2015, and she has since lived in a nursing home in Stone Mountain, Ga. Two of her children live nearby, so they’ve been very helpful to Mary. A son lives in California and another daughter in Connecticut. Mary attends church every Sunday with her daughter in Connecticut via Skype! She sees and hears the whole ceremony and even greets some of the people on the way out. Isn’t technology amazing? And so is Mary! • Geri Rutman Karno and her second husband, Marty, who is a retired orthopedic surgeon, now live in Palm Beach Gardens. Very sadly, Geri’s older son, Will, died in May 2017. Her younger son, Tom, is now retired, having had a successful career running an automobile agency in New Jersey. One of Geri’s grandsons, Max, went to Dartmouth Medical School and is now a doctor at the Yale New Haven Hospital. Her other grandson, Ben, works in finance/ acquisitions in New York City. • I want to encourage all of you to send in your info — we love hearing about your life, your kids and grandkids, etc.! Best to you all. — Diffy and Anne

Mount Hermon Charles A. Kennedy chask@myfairpoint.net (603) 223-0731 It’s amazing to me how active our class remains in retirement. Bob McManus, who has long been active in bio-friendly insect control, recently co-authored the patent application for “wireless controlling and performance tracking technology” that can be applied to areas that harbor mosquitoes carrying malaria and the Zika virus. Bob is