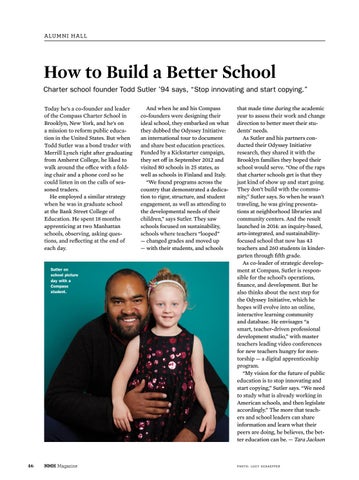 How to Build a Better School Charter school founder Todd Sutler ’94 says, “Stop innovating and start copying.” Today he’s a co-founder and leader of the Compass Charter School in Brooklyn, New York, and he’s on a mission to reform public education in the United States. But when Todd Sutler was a bond trader with Merrill Lynch right after graduating from Amherst College, he liked to walk around the office with a folding chair and a phone cord so he could listen in on the calls of seasoned traders. He employed a similar strategy when he was in graduate school at the Bank Street College of Education. He spent 18 months apprenticing at two Manhattan schools, observing, asking questions, and reflecting at the end of each day.

Sutler on school picture day with a Compass student.

And when he and his Compass co-founders were designing their ideal school, they embarked on what they dubbed the Odyssey Initiative: an international tour to document and share best education practices. Funded by a Kickstarter campaign, they set off in September 2012 and visited 80 schools in 25 states, as well as schools in Finland and Italy. “We found programs across the country that demonstrated a dedication to rigor, structure, and student engagement, as well as attending to the developmental needs of their children,” says Sutler. They saw schools focused on sustainability, schools where teachers “looped” — changed grades and moved up — with their students, and schools

that made time during the academic year to assess their work and change direction to better meet their students’ needs. As Sutler and his partners conducted their Odyssey Initiative research, they shared it with the Brooklyn families they hoped their school would serve. “One of the raps that charter schools get is that they just kind of show up and start going. They don’t build with the community,” Sutler says. So when he wasn’t traveling, he was giving presentations at neighborhood libraries and community centers. And the result launched in 2014: an inquiry-based, arts-integrated, and sustainabilityfocused school that now has 43 teachers and 260 students in kindergarten through fifth grade. As co-leader of strategic development at Compass, Sutler is responsible for the school’s operations, finance, and development. But he also thinks about the next step for the Odyssey Initiative, which he hopes will evolve into an online, interactive learning community and database. He envisages “a smart, teacher-driven professional development studio,” with master teachers leading video conferences for new teachers hungry for mentorship — a digital apprenticeship program. “My vision for the future of public education is to stop innovating and start copying,” Sutler says. “We need to study what is already working in American schools, and then legislate accordingly.” The more that teachers and school leaders can share information and learn what their peers are doing, he believes, the better education can be. — Tara Jackson