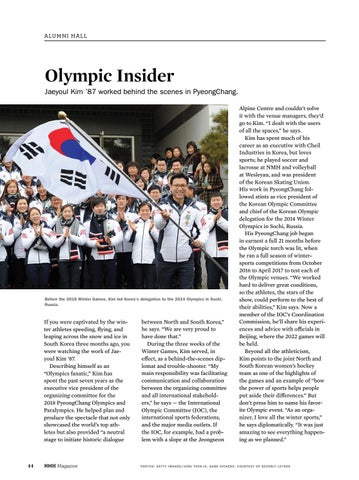 Olympic Insider Jaeyoul Kim ’87 worked behind the scenes in PyeongChang.

Before the 2018 Winter Games, Kim led Korea’s delegation to the 2014 Olympics in Sochi, Russia.

If you were captivated by the winter athletes speeding, flying, and leaping across the snow and ice in South Korea three months ago, you were watching the work of Jaeyoul Kim ’87. Describing himself as an “Olympics fanatic,” Kim has spent the past seven years as the executive vice president of the organizing committee for the 2018 PyeongChang Olympics and Paralympics. He helped plan and produce the spectacle that not only showcased the world’s top athletes but also provided “a neutral stage to initiate historic dialogue

between North and South Korea,” he says. “We are very proud to have done that.” During the three weeks of the Winter Games, Kim served, in effect, as a behind-the-scenes diplomat and trouble-shooter. “My main responsibility was facilitating communication and collaboration between the organizing committee and all international stakeholders,” he says — the International Olympic Committee (IOC), the international sports federations, and the major media outlets. If the IOC, for example, had a problem with a slope at the Jeongseon

Alpine Centre and couldn’t solve it with the venue managers, they’d go to Kim. “I dealt with the users of all the spaces,” he says. Kim has spent much of his career as an executive with Cheil Industries in Korea, but loves sports; he played soccer and lacrosse at NMH and volleyball at Wesleyan, and was president of the Korean Skating Union. His work in PyeongChang followed stints as vice president of the Korean Olympic Committee and chief of the Korean Olympic delegation for the 2014 Winter Olympics in Sochi, Russia. His PyeongChang job began in earnest a full 21 months before the Olympic torch was lit, when he ran a full season of wintersports competitions from October 2016 to April 2017 to test each of the Olympic venues. “We worked hard to deliver great conditions, so the athletes, the stars of the show, could perform to the best of their abilities,” Kim says. Now a member of the IOC’s Coordination Commission, he’ll share his experiences and advice with officials in Beijing, where the 2022 games will be held. Beyond all the athleticism, Kim points to the joint North and South Korean women’s hockey team as one of the highlights of the games and an example of “how the power of sports helps people put aside their differences.” But don’t press him to name his favorite Olympic event. “As an organizer, I love all the winter sports,” he says diplomatically. “It was just amazing to see everything happening as we planned.”