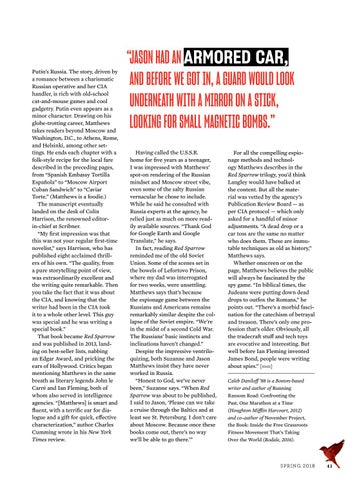 Putin’s Russia. The story, driven by a romance between a charismatic Russian operative and her CIA handler, is rich with old-school cat-and-mouse games and cool gadgetry. Putin even appears as a minor character. Drawing on his globe-trotting career, Matthews takes readers beyond Moscow and Washington, D.C., to Athens, Rome, and Helsinki, among other settings. He ends each chapter with a folk-style recipe for the local fare described in the preceding pages, from “Spanish Embassy Tortilla Española” to “Moscow Airport Cuban Sandwich” to “Caviar Torte.” (Matthews is a foodie.) The manuscript eventually landed on the desk of Colin Harrison, the renowned editorin-chief at Scribner. “My first impression was that this was not your regular first-time novelist,” says Harrison, who has published eight acclaimed thrillers of his own. “The quality, from a pure storytelling point of view, was extraordinarily excellent and the writing quite remarkable. Then you take the fact that it was about the CIA, and knowing that the writer had been in the CIA took it to a whole other level. This guy was special and he was writing a special book.” That book became Red Sparrow and was published in 2013, landing on best-seller lists, nabbing an Edgar Award, and pricking the ears of Hollywood. Critics began mentioning Matthews in the same breath as literary legends John le Carré and Ian Fleming, both of whom also served in intelligence agencies. “[Matthews] is smart and fluent, with a terrific ear for dialogue and a gift for quick, effective characterization,” author Charles Cumming wrote in his New York Times review.

“ JASON HAD AN ARMORED CAR, AND BEFORE WE GOT IN, A GUARD WOULD LOOK UNDERNEATH WITH A MIRROR ON A STICK, LOOKING FOR SMALL MAGNETIC BOMBS.” Having called the U.S.S.R. home for five years as a teenager, I was impressed with Matthews’ spot-on rendering of the Russian mindset and Moscow street vibe, even some of the salty Russian vernacular he chose to include. While he said he consulted with Russia experts at the agency, he relied just as much on more readily available sources. “Thank God for Google Earth and Google Translate,” he says. In fact, reading Red Sparrow reminded me of the old Soviet Union. Some of the scenes set in the bowels of Lefortovo Prison, where my dad was interrogated for two weeks, were unsettling. Matthews says that’s because the espionage game between the Russians and Americans remains remarkably similar despite the collapse of the Soviet empire. “We’re in the midst of a second Cold War. The Russians’ basic instincts and inclinations haven’t changed.” Despite the impressive ventriloquizing, both Suzanne and Jason Matthews insist they have never worked in Russia. “Honest to God, we’ve never been,” Suzanne says. “When Red Sparrow was about to be published, I said to Jason, ‘Please can we take a cruise through the Baltics and at least see St. Petersburg. I don’t care about Moscow. Because once these books come out, there’s no way we’ll be able to go there.’”

For all the compelling espionage methods and technology Matthews describes in the Red Sparrow trilogy, you’d think Langley would have balked at the content. But all the material was vetted by the agency’s Publication Review Board — as per CIA protocol — which only asked for a handful of minor adjustments. “A dead drop or a car toss are the same no matter who does them. These are immutable techniques as old as history,” Matthews says. Whether onscreen or on the page, Matthews believes the public will always be fascinated by the spy game. “In biblical times, the Judeans were putting down dead drops to outfox the Romans,” he points out. “There’s a morbid fascination for the catechism of betrayal and treason. There’s only one profession that’s older. Obviously, all the tradecraft stuff and tech toys are evocative and interesting. But well before Ian Fleming invented James Bond, people were writing about spies.” [NMH] Caleb Daniloff ’88 is a Boston-based writer and author of Running Ransom Road: Confronting the Past, One Marathon at a Time (Houghton Mifflin Harcourt, 2012) and co-author of November Project, the Book: Inside the Free Grassroots Fitness Movement That’s Taking Over the World (Rodale, 2016).