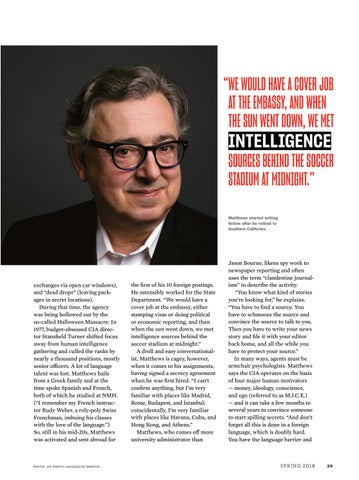 “ WE WOULD HAVE A COVER JOB AT THE EMBASSY, AND WHEN THE SUN WENT DOWN, WE MET INTELLIGENCE SOURCES BEHIND THE SOCCER STADIUM AT MIDNIGHT.” Matthews started writing fiction after he retired to Southern California.

exchanges via open car windows), and “dead drops” (leaving packages in secret locations). During that time, the agency was being hollowed out by the so-called Halloween Massacre: In 1977, budget-obsessed CIA director Stansfield Turner shifted focus away from human intelligence gathering and culled the ranks by nearly a thousand positions, mostly senior officers. A lot of language talent was lost. Matthews hails from a Greek family and at the time spoke Spanish and French, both of which he studied at NMH. (“I remember my French instructor Rudy Weber, a roly-poly Swiss Frenchman, imbuing his classes with the love of the language.”) So, still in his mid-20s, Matthews was activated and sent abroad for

the first of his 10 foreign postings. He ostensibly worked for the State Department. “We would have a cover job at the embassy, either stamping visas or doing political or economic reporting, and then when the sun went down, we met intelligence sources behind the soccer stadium at midnight.” A droll and easy conversationalist, Matthews is cagey, however, when it comes to his assignments, having signed a secrecy agreement when he was first hired. “I can’t confirm anything, but I’m very familiar with places like Madrid, Rome, Budapest, and Istanbul; coincidentally, I’m very familiar with places like Havana, Cuba, and Hong Kong, and Athens.” Matthews, who comes off more university administrator than

Jason Bourne, likens spy work to newspaper reporting and often uses the term “clandestine journalism” to describe the activity. “You know what kind of stories you’re looking for,” he explains. “You have to find a source. You have to schmooze the source and convince the source to talk to you. Then you have to write your news story and file it with your editor back home, and all the while you have to protect your source.” In many ways, agents must be armchair psychologists. Matthews says the CIA operates on the basis of four major human motivators — money, ideology, conscience, and ego (referred to as M.I.C.E.) — and it can take a few months to several years to convince someone to start spilling secrets. “And don’t forget all this is done in a foreign language, which is doubly hard. You have the language barrier and