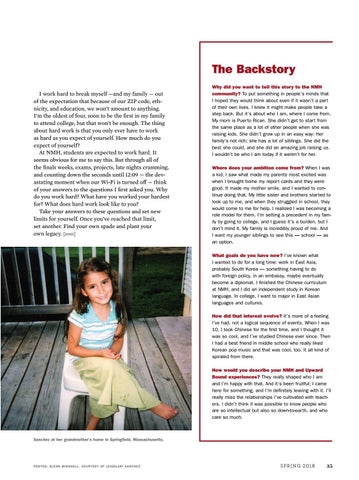 The Backstory I work hard to break myself —and my family — out of the expectation that because of our ZIP code, ethnicity, and education, we won’t amount to anything. I’m the oldest of four, soon to be the first in my family to attend college, but that won’t be enough. The thing about hard work is that you only ever have to work as hard as you expect of yourself. How much do you expect of yourself? At NMH, students are expected to work hard. It seems obvious for me to say this. But through all of the finals weeks, exams, projects, late nights cramming, and counting down the seconds until 12:09 — the devastating moment when our Wi-Fi is turned off — think of your answers to the questions I first asked you. Why do you work hard? What have you worked your hardest for? What does hard work look like to you? Take your answers to these questions and set new limits for yourself. Once you’ve reached that limit, set another. Find your own spade and plant your own legacy. [NMH]

Why did you want to tell this story to the NMH community? To put something in people’s minds that I hoped they would think about even if it wasn’t a part of their own lives. I knew it might make people take a step back. But it’s about who I am, where I come from. My mom is Puerto Rican. She didn’t get to start from the same place as a lot of other people when she was raising kids. She didn’t grow up in an easy way: Her family’s not rich; she has a lot of siblings. She did the best she could, and she did an amazing job raising us. I wouldn’t be who I am today if it weren’t for her. Where does your ambition come from? When I was a kid, I saw what made my parents most excited was when I brought home my report cards and they were good. It made my mother smile, and I wanted to continue doing that. My little sister and brothers started to look up to me, and when they struggled in school, they would come to me for help. I realized I was becoming a role model for them. I’m setting a precedent in my family by going to college, and I guess it’s a burden, but I don’t mind it. My family is incredibly proud of me. And I want my younger siblings to see this — school — as an option. What goals do you have now? I’ve known what I wanted to do for a long time: work in East Asia, probably South Korea — something having to do with foreign policy, in an embassy, maybe eventually become a diplomat. I finished the Chinese curriculum at NMH, and I did an independent study in Korean language. In college, I want to major in East Asian languages and cultures. How did that interest evolve? It’s more of a feeling I’ve had, not a logical sequence of events. When I was 10, I took Chinese for the first time, and I thought it was so cool, and I’ve studied Chinese ever since. Then I had a best friend in middle school who really liked Korean pop music and that was cool, too. It all kind of spiraled from there. How would you describe your NMH and Upward Bound experiences? They really shaped who I am and I’m happy with that. And it’s been fruitful; I came here for something, and I’m definitely leaving with it. I’ll really miss the relationships I’ve cultivated with teachers. I didn’t think it was possible to know people who are so intellectual but also so down-to-earth, and who care so much.

Sanchez at her grandmother’s home in Springfield, Massachusetts.