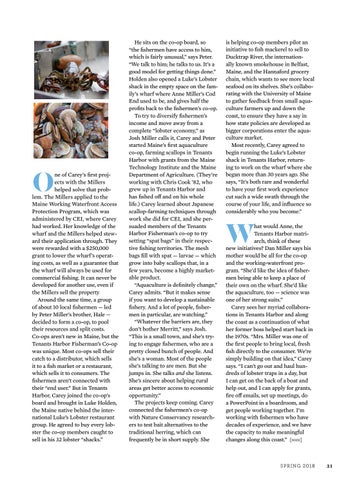 ne of Carey’s first projects with the Millers helped solve that problem. The Millers applied to the Maine Working Waterfront Access Protection Program, which was administered by CEI, where Carey had worked. Her knowledge of the wharf and the Millers helped steward their application through. They were rewarded with a $250,000 grant to lower the wharf’s operating costs, as well as a guarantee that the wharf will always be used for commercial fishing. It can never be developed for another use, even if the Millers sell the property Around the same time, a group of about 10 local fishermen — led by Peter Miller’s brother, Hale — decided to form a co-op, to pool their resources and split costs. Co-ops aren’t new in Maine, but the Tenants Harbor Fisherman’s Co-op was unique. Most co-ops sell their catch to a distributor, which sells it to a fish market or a restaurant, which sells it to consumers. The fishermen aren’t connected with their “end user.” But in Tenants Harbor, Carey joined the co-op’s board and brought in Luke Holden, the Maine native behind the international Luke’s Lobster restaurant group. He agreed to buy every lobster the co-op members caught to sell in his 32 lobster “shacks.”

He sits on the co-op board, so “the fishermen have access to him, which is fairly unusual,” says Peter. “We talk to him; he talks to us. It’s a good model for getting things done.” Holden also opened a Luke’s Lobster shack in the empty space on the family’s wharf where Anne Miller’s Cod End used to be, and gives half the profits back to the fishermen’s co-op. To try to diversify fishermen’s income and move away from a complete “lobster economy,” as Josh Miller calls it, Carey and Peter started Maine’s first aquaculture co-op, farming scallops in Tenants Harbor with grants from the Maine Technology Institute and the Maine Department of Agriculture. (They’re working with Chris Cook ’82, who grew up in Tenants Harbor and has fished off and on his whole life.) Carey learned about Japanese scallop-farming techniques through work she did for CEI, and she persuaded members of the Tenants Harbor Fisherman’s co-op to try setting “spat bags” in their respective fishing territories. The mesh bags fill with spat — larvae — which grow into baby scallops that, in a few years, become a highly marketable product. “Aquaculture is definitely change,” Carey admits. “But it makes sense if you want to develop a sustainable fishery. And a lot of people, fishermen in particular, are watching.” “Whatever the barriers are, they don’t bother Merritt,” says Josh. “This is a small town, and she’s trying to engage fishermen, who are a pretty closed bunch of people. And she’s a woman. Most of the people she’s talking to are men. But she jumps in. She talks and she listens. She’s sincere about helping rural areas get better access to economic opportunity.” The projects keep coming. Carey connected the fishermen’s co-op with Nature Conservancy researchers to test bait alternatives to the traditional herring, which can frequently be in short supply. She

is helping co-op members pilot an initiative to fish mackerel to sell to Ducktrap River, the internationally known smokehouse in Belfast, Maine, and the Hannaford grocery chain, which wants to see more local seafood on its shelves. She’s collaborating with the University of Maine to gather feedback from small aquaculture farmers up and down the coast, to ensure they have a say in how state policies are developed as bigger corporations enter the aquaculture market. Most recently, Carey agreed to begin running the Luke’s Lobster shack in Tenants Harbor, returning to work on the wharf where she began more than 30 years ago. She says, “It’s both rare and wonderful to have your first work experience cut such a wide swath through the course of your life, and influence so considerably who you become.”

hat would Anne, the Tenants Harbor matriarch, think of these new initiatives? Dan Miller says his mother would be all for the co-op and the working-waterfront program. “She’d like the idea of fishermen being able to keep a place of their own on the wharf. She’d like the aquaculture, too — science was one of her strong suits.” Carey sees her myriad collaborations in Tenants Harbor and along the coast as a continuation of what her former boss helped start back in the 1970s. “Mrs. Miller was one of the first people to bring local, fresh fish directly to the consumer. We’re simply building on that idea,” Carey says. “I can’t go out and haul hundreds of lobster traps in a day, but I can get on the back of a boat and help out, and I can apply for grants, fire off emails, set up meetings, do a PowerPoint in a boardroom, and get people working together. I’m working with fishermen who have decades of experience, and we have the capacity to make meaningful changes along this coast.” [NMH]