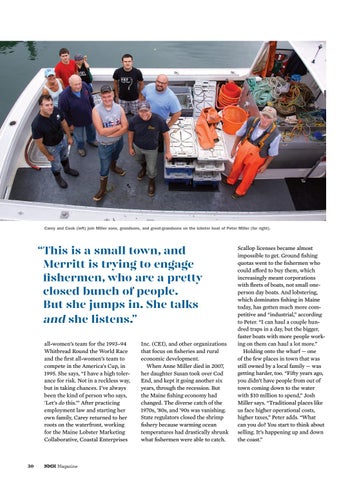 “ This is a small town, and Merritt is trying to engage fishermen, who are a pretty closed bunch of people. But she jumps in. She talks and she listens.” all-women’s team for the 1993–94 Whitbread Round the World Race and the first all-women’s team to compete in the America’s Cup, in 1995. She says, “I have a high tolerance for risk. Not in a reckless way, but in taking chances. I’ve always been the kind of person who says, &#39;Let’s do this.’” After practicing employment law and starting her own family, Carey returned to her roots on the waterfront, working for the Maine Lobster Marketing Collaborative, Coastal Enterprises

Inc. (CEI), and other organizations that focus on fisheries and rural economic development. When Anne Miller died in 2007, her daughter Susan took over Cod End, and kept it going another six years, through the recession. But the Maine fishing economy had changed. The diverse catch of the 1970s, ’80s, and ’90s was vanishing. State regulators closed the shrimp fishery because warming ocean temperatures had drastically shrunk what fishermen were able to catch.

Scallop licenses became almost impossible to get. Ground fishing quotas went to the fishermen who could afford to buy them, which increasingly meant corporations with fleets of boats, not small oneperson day boats. And lobstering, which dominates fishing in Maine today, has gotten much more competitive and “industrial,” according to Peter. “I can haul a couple hundred traps in a day, but the bigger, faster boats with more people working on them can haul a lot more.” Holding onto the wharf — one of the few places in town that was still owned by a local family — was getting harder, too. “Fifty years ago, you didn’t have people from out of town coming down to the water with $10 million to spend,” Josh Miller says. “Traditional places like us face higher operational costs, higher taxes,” Peter adds. “What can you do? You start to think about selling. It’s happening up and down the coast.”