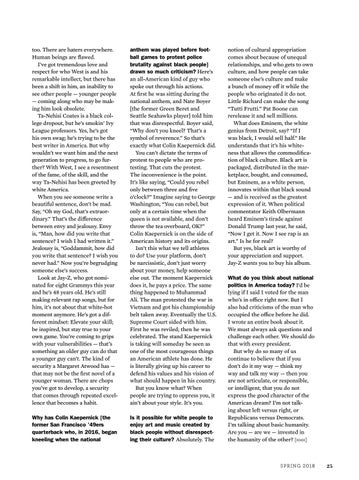 too. There are haters everywhere. Human beings are flawed. I’ve got tremendous love and respect for who West is and his remarkable intellect, but there has been a shift in him, an inability to see other people — younger people — coming along who may be making him look obsolete. Ta-Nehisi Coates is a black college dropout, but he’s smokin’ Ivy League professors. Yes, he’s got his own swag; he’s trying to be the best writer in America. But why wouldn’t we want him and the next generation to progress, to go further? With West, I see a resentment of the fame, of the skill, and the way Ta-Nehisi has been greeted by white America. When you see someone write a beautiful sentence, don’t be mad. Say, “Oh my God, that’s extraordinary.” That’s the difference between envy and jealousy. Envy is, “Man, how did you write that sentence? I wish I had written it.” Jealousy is, “Goddammit, how did you write that sentence? I wish you never had.” Now you’re begrudging someone else’s success. Look at Jay-Z, who got nominated for eight Grammys this year and he’s 48 years old. He’s still making relevant rap songs, but for him, it’s not about that white-hot moment anymore. He’s got a different mindset: Elevate your skill; be inspired, but stay true to your own game. You’re coming to grips with your vulnerabilities — that’s something an older guy can do that a younger guy can’t. The kind of security a Margaret Atwood has — that may not be the first novel of a younger woman. There are chops you’ve got to develop, a security that comes through repeated excellence that becomes a habit.

anthem was played before football games to protest police brutality against black people] drawn so much criticism? Here’s an all-American kind of guy who spoke out through his actions. At first he was sitting during the national anthem, and Nate Boyer [the former Green Beret and Seattle Seahawks player] told him that was disrespectful. Boyer said, “Why don’t you kneel? That’s a symbol of reverence.” So that’s exactly what Colin Kaepernick did. You can’t dictate the terms of protest to people who are protesting. That cuts the protest. The inconvenience is the point. It’s like saying, “Could you rebel only between three and five o’clock?” Imagine saying to George Washington, “You can rebel, but only at a certain time when the queen is not available, and don’t throw the tea overboard, OK?” Colin Kaepernick is on the side of American history and its origins. Isn’t this what we tell athletes to do? Use your platform, don’t be narcissistic, don’t just worry about your money, help someone else out. The moment Kaepernick does it, he pays a price. The same thing happened to Muhammad Ali. The man protested the war in Vietnam and got his championship belt taken away. Eventually the U.S. Supreme Court sided with him. First he was reviled; then he was celebrated. The stand Kaepernick is taking will someday be seen as one of the most courageous things an American athlete has done. He is literally giving up his career to defend his values and his vision of what should happen in his country. But you know what? When people are trying to oppress you, it ain’t about your style. It’s you.

Why has Colin Kaepernick [the former San Francisco ’49ers quarterback who, in 2016, began kneeling when the national

Is it possible for white people to enjoy art and music created by black people without disrespecting their culture? Absolutely. The

notion of cultural appropriation comes about because of unequal relationships, and who gets to own culture, and how people can take someone else’s culture and make a bunch of money off it while the people who originated it do not. Little Richard can make the song “Tutti Frutti.” Pat Boone can rerelease it and sell millions. What does Eminem, the white genius from Detroit, say? “If I was black, I would sell half.” He understands that it’s his whiteness that allows the commodification of black culture. Black art is packaged, distributed in the marketplace, bought, and consumed, but Eminem, as a white person, innovates within that black sound — and is received as the greatest expression of it. When political commentator Keith Olbermann heard Eminem’s tirade against Donald Trump last year, he said, “Now I get it. Now I see rap is an art.” Is he for real? But yes, black art is worthy of your appreciation and support. Jay-Z wants you to buy his album. What do you think about national politics in America today? I’d be lying if I said I voted for the man who’s in office right now. But I also had criticisms of the man who occupied the office before he did. I wrote an entire book about it. We must always ask questions and challenge each other. We should do that with every president. But why do so many of us continue to believe that if you don’t do it my way — think my way and talk my way — then you are not articulate, or responsible, or intelligent, that you do not express the good character of the American dream? I’m not talking about left versus right, or Republicans versus Democrats. I’m talking about basic humanity. Are you — are we — invested in the humanity of the other? [NMH]